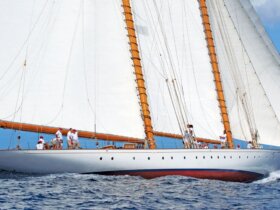 A new location, new format and new Carnival season time slot gave this Tobago Regatta fresh energy and a new vibe. The mix of yacht racing, bum boat racing, wind surfing, kite boarding, beach games and parties – all happening right on or just off the idyllic beach at Pigeon Point, added excitement for participants and spectators. It was four events rolled into one, presenting some tricky logistics, but those who took on this challenge are to be congratulated on this first attempt.

The Committee Boat crew knew the regatta was under way when the 65’ Maxis thundered across the line very little space between them. Unfortunately Challenger 4 dropped out before the end of the regatta because of gear failure, but Spirit of Juno and Spirit of Isis (the ultimate winner) tacked and cover tacked their way around the courses in America’s Cup-style match racing.

Smooth starts were a feature of the yacht racing, with only one boat over the line on one start and no protests. Happily, a number of issues were resolved by boats exonerating themselves with 720 turns. This final regatta in The Festival of Wind Southern Caribbean Circuit(Carriacou, Grenada, Tobago) certainly got its share of wind, not to mention unseasonable rain. On Day 1 the fleet sailed in a brisk 15 – 20 knots, by Day 2 seas had built up and winds were gusting 30 knots during squalls, making conditions cold, wet and grueling, especially for the smaller boats that did 3 races. Day 3 saw a slight easing of wind and by Day 4 it was sunny with more comfortable seas.

On the Day 1, one of a string of spectacular broaches found The Artful Dodger, a Melges 24 in a dodgy situation, down flat directly in front of the Swan Tobasco and only some artful dodging by Tobasco’s helmsman prevented them becoming the Ex Artful Dodger. On Day 2, when boats began to skid along with their masts parallel to the water, the Race Officer had a premonition of trouble, because he called the Regatta RIB out as a safety precaution and only minutes later a halyard let go on the Melges 24 Mojo, and their mast came down. Fortunately there was no injury to the crew who recovered and repaired their mast to fight another day, thanks to support from safety boats and other Melges 24 competitors. On Day 4, when Mojo ripped their spinnaker before the start of Race 1 and was about to retire, Drunken Monkey came to their rescue with their spare spinnaker. Drunken Monkey (Paul Amon) convincingly won the regatta overall, with Synergy (Jeffrey Chen) 2nd and Mojo (Rostant/De Vertieul/MacKenzie) a close 3rd.

In the J24 class it was great to see the young crew on Ambushe (Stephen Bushe) show a few of the old hands a clean wake, but not without close competition from Jabulani (Peter Hoad) 2nd. Die Hard (Robbie Yearwood) from Grenada was 3rd. These J24 sailors deserve a medal just for sailing their small craft up to Tobago against wind and current. In the Racer Cruiser class bMobile Enzyme (Paul Solomon) was king – always first out on the water, with immaculate spinnaker work and solid starts. Bruggadung (Ralph Johnson) from Barbados was 2nd and Jaguar (Peter Morris) 3rd. Cruising Class was dominated by the evergreen Petit Careme (Rawle Barrow – rumour has it their average crew age was in the 60s). 2nd was Carnival (Phillipe Agostini), back in action again after a break, with Beex (Paul Hatch) 3rd.

Watching the Bum Boats was an experience all by itself. Historically, these very technical boats with their sweet lines were developed and built in Tobago, St Lucia, Bequia and Grenada and it was thrilling to watch their skilled crews sail. Standing starts off the lagoon beach were accompanied by much yelling from the support crews, families and friends. On their return, perceived infringements were dealt with by hurling “expletive deletives” back and forth, which ultimately seemed to resolve the problem. Makes one wonder why we bother with protest committees.

The Tobago House of Assembly gave substantial support to this event and aim to encourage more participation particularly by local youth in future Tobago Carnival Regattas. The sheer speed of the windsurfers and the awesome air show by the kite boarders, some of whom came from Europe to participate, added an extra edge and adrenalin to this regatta. No other event in the Caribbean combines the four water sports that this one did, and if in future dinghy racing is included, it will be truly unique.