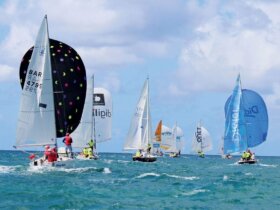 St. Thomas, US Virgin Islands. The signature race to Charlotte Amalie harbor on today’s first day of the St. Thomas International Regatta (STIR) turned into a sprint for some and a splash for others with winds gusting to nearly 30 knots. Most of the 67 boat fleet, divided into eight classes ranging from 16-foot beach cats to 60-foot Gunboats, braved the conditions that saw sailors race 16 nautical miles to the historic harbor and back again to the host St. Thomas Yacht Club (STYC).

“It was pretty windy and we had some big puffs,” says St. Thomas’ Chris Curreri, who helmed the IC24, Bill T, which is leading the 13-boat one-design IC24 Class according to preliminary scores after three races. “In fact, right as we got to the finish in the harbor on the race down it was blowing 30 knots – a survival finish.”

The forecast proved a challenge for the 12-boat one-design VX Ones. Class rules for regattas call for no starts when the median wind speed exceeds 22 knots. Class vice-president and St. Croix native, Tim Pitts, called for an increase in that limit to 27 knots. As a result, all but one of the class raced. Everyone, but a few such as Florida’s George Gamble’s My Sharona and Massachusetts’ Paulo Milko’s Milkoway which capsized while racing, reveled in the big breeze.

“I think as the class grows and matures it’s possible to race at a higher wind limit,” said Pitts, a St. Croix native and currently Newport, RI resident who is leading the class with three first place finishes. “We had a great start in the first race when we popped our kite and shoot out 10 seconds after the gun. We ripped our head sail and finished up that race without a spinnaker. In the last race upwind, it was Chris Poole on Don Winston’s Szforzando and I match racing to the finish and we won. That’s pretty incredible. Not only the close racing, but also beating Chris because he’s a world-ranked match racer.”

The windy weather only added to the tight racing excitement in the CSA Spinnaker Racing 3 Class. After two races, St. Thomas’ Lawrence Aqui’s Dufour 40, Wild T’ing is in first since he won the last race, while Puerto Rico’s Jonathan Lipuscek on his J/105 Dark Star is second. However, both boats are tied with 3.0 points apiece.

“This wind isn’t unusual for us,” says Rafael ‘Rafi’ Martinez, tactician aboard Dark Star. Plus, the first day of racing in the St. Maarten Heineken Regatta earlier this blowing this hard, so we’re use to us. On the way down, it was Pipedream that was our closest competitor until they broke a steering cable and we passed them. On the way back up, we traded places for the lead several times with Wild T’ing, until they beat us by less than a minute.”

There were no complaints about conditions aboard Team Magnitude-El Ocaso, which is leading the CSA Spinnaker Racing 2 Class with two firsts. The Southern California crew headed by Doug Baker, who chartered the J/122, had some local knowledge onboard with the BVI’s Mark Plaxton. It was certainly helpful as while the crew has sailed together many times they were all new to the boat.

“We finished ahead of Corr’s Lite by less than a minute into the harbor even though we dropped our chute early,” says Plaxton, a podium finisher in previous STIR’s aboard his Melges 32 and IC24, both named INTAC. “On the way up, we had the boat going nearly 8 knots upwind, or about a 15 to 20 percent improvement in boat speed over the first race of the day, which is pretty impressive. We just keep getting better than longer we sail the boat.”

In the Beach Cat class, it was the Florida-based husband-and-wife team of Annie Gardner and Eric Witte that are first. Then again, out of 8 entries, Gardner and Witte sailing on the Nacra 17, Flight Risk, were the only to complete both races. It’s no wonder with the wealth of experience Gardner has to her credit. The 2006 Yachtswoman of the Year is an Olympic silver medalist in Boardsailing as well as holder of five world titles and 17 national and international titles.

Entrants in the Gunboat and CSA Spinnaker Racing 1 classes were also pleased with the breeze. Rye, NY’s Robert Alexander’s Gunboat 60, Fault Tolerant, won both of his races. So did Norwalk, CT’s Steve Benjamin driving his TP 52, Spookie. It was the second of two good days of racing as Benjamin, 2015 Rolex Yachtsman of the Year, not only won his class, but Spookie’s name on the new perpetual trophy for best elapsed time at 2 hours 22 minutes and 36 seconds in the inaugural Round the Rocks Race on Thursday. The ‘Wing & Prayer’ trophy is named after former St. Thomas resident, Ken Bragg, the architect who designed the STYC in the early 1960s and whose heroic rescue while piloting a B-17 bomber in World War II is the subject of the famous song, ‘Coming in on a Wing and a Prayer.’

Finally, it was St. Croix’s Stan Joines and his teenage crew racing Joines’ J/30, Paladin, that ultimately wished for calmer weather when the boat was dismasted in the first race.

“We were booking it, up with the Swans, as we headed into the harbor. Then, there was a ‘ping’ as a line snapped. We dropped the main and tried to sail in on a jib since the boat doesn’t have an engine, but it was too much and the mast gave out. It broke in more than one place,” says Joines.

Where to Watch, Where to Party

Competition continues Saturday, March 26, with racing off the northeast and southeast shores of St. Thomas. The music starts at 2:30 p.m., on the beach at STYC with Lourdes & Flip Switch. Then, party like a sailor starting at 7 p.m. at Yacht Haven Grande with Spectrum Band live on stage.

Racing concludes on Sunday, March 27, with the Awards Ceremony on the beach at STYC starting at 6:30 p.m. The Final Fling Party starts right after with Ah We Band.

For more information, contact Regatta Director Chuck Pessler at (340) 642-3204 or Email [email protected] For full information about the Round the Rounds and St. Thomas International Regatta, including results, photos, social schedule and more, please visit www.stthomasinternationalregatta.com. Follow us on Social Media!
Check out STIR on Facebook (www.facebook.com/stirvi), Twitter @stycvi and Instagram #STIRVI

Cruzan Rum, founded in 1760 on the U.S. Virgin Island of St. Croix and owned and operated by the 8th generation of family founders, is produced in over 50 award-winning flavors and ages at the company’s Estate Diamond Distillery. Presidente, owned and operated by Cerveceria Nacional Dominicana, is a pale lager with a rich refreshing flavor. Cruzan Rum and Presidente beer are distributed in the U.S. Virgin Islands by Glazer’s Premier Distributors, LLC.