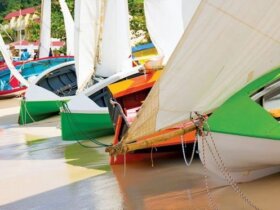 “Cy qualified early for Rio 2016 and trained with top sailors in the class the previous 18 months. The last nine months up to the Olympics, he gave up his personal life and business opportunities to continue to train every day on and off the water to bring his best effort, which he did,” explains VISA president, Phillip Shannon, about Thompson’s selection by VISA.

Thompson, age 28, a native of the U.S. Virgin Islands and grandson of one of the territory’s first Olympic sailors, Rudy Thompson, is honored to be selected.

“Being the recipient of VISA’s Sailor of The Year award is a great honor and it makes everything that I’ve done well worth it. I’m aware that a few other Virgin Islands sailors were in contention for this award and I am very happy that VISA has rewarded my efforts for the many years I spent training and competing with the ultimate goal to race in the 2016 Olympic Games,” says Thompson.

Thompson, who competed in the Laser class at the 2012 Olympic Games in London where he finished 25th, qualified for the 2016 Games at the 2014 ISAF World Championships in Santander, Spain.

The VISA award caps an incredible year of achievement for Thompson, which started 12 months before the Games when he won the CORK Olympic Class Regatta in Kingston, Canada, for the second year in a row. He then moved on to finish 8th at the Sailing World Cup Qingdao, in China. Thompson started 2016 by placing 20th at the Sailing World Cup Miami and 24th in the Trofeo Princesa Sofia in Palma Mallorca, Spain, making it into the extremely competitive Gold fleet in each of these last two events. He then turned his focus to comprehensively working with his coach, Vaughn Harrison, at the International Sailing Academy in Puerto Vallarta, Mexico as well as at the Olympic venue in Rio de Janeiro, Brazil.

One week prior the Opening Ceremony in Rio, Thompson learned he would be the flag bearer for the entire U.S. Virgin Islands Olympic delegation.

“It is the greatest honor to carry your country’s flag at the Olympic Games. It is also very hard to put into words the emotions I felt when our VI team stepped into a stadium filled with 80,000-plus people cheering us on. It made me so proud coming from such a small nation and realizing the sacrifices we as athletes put ourselves through to earn that privilege. Parading in Maracana Stadium amongst 205 other countries was truly an unbelievable experience,” says Thompson.

Versatility played a huge contributing role to Thompson success’ at first on the tricky courses as conditions for the Games were quite different from those he experienced during earlier training camps.

“The first couple of days I sailed really well and found myself near the top of the leaderboard. I felt confident and focused. The breeze was up on the third day and although I felt great physically in the boat, I made some bad tactical decisions and dropped considerably in the standings. It was disappointing but most importantly I needed to refocus. That is the toughest discipline any athlete faces when they are at the top of their game. I regrouped, fought hard and climbed back up to 19th out of 46 countries,” he recaps.

Thompson, who started sailing at age 4, credits his parents and grandparents for laying the groundwork for his sailing career by teaching him to be competitive and respectful, two traits which shaped his determination to pursue the sport at its highest level. He also acknowledges his U.S. Virgin Islands upbringing, both the natural environment in which warm weather and strong trade winds makes it possible to sail year-round, as well as the sailors whom he grew up sailing with such as the world’s number one ranked match racer, Taylor Canfield; two-time Olympic sailor Thomas Barrows, and multi-time world champion, Anthony Kotoun. Finally, Thompson says fellow Virgin Islands sailor Peter Holmberg winning an Olympic silver Medal in the Finn Class in Seoul in 1988 set the bar high for younger sailors to succeed in being a part of the VI’s Olympic sailing legacy.

Looking ahead, Thompson has been invited by Canfield and his US One Sailing Team to be part of the 2017 World Match Racing Championship season.

“This will be slightly different from what I have been doing over the past 6 years, but something that I am familiar with at the same time. I did a fair amount of match racing with Taylor years back, and I am familiar with the boat they sail on, the M32, a high-performance catamaran. I am super excited by the opportunity to work with a world class team, to sail on a fast boat and to do what I love,” says Thompson, who will also continue to pursue other types of professional sailing, coaching and helping sailors with Olympic aspirations.

What advice does Thompson offer to young sailors in the U.S. Virgin Islands?

“Make sure you don’t lose sight of why you sail. First and foremost, you really should love it and from there on everything else should fall into place whether you continue as a recreational sailor or take it to the next level of competitive sailing. Keeping it fun is essential to be a lifelong sailor,” Thompson says.