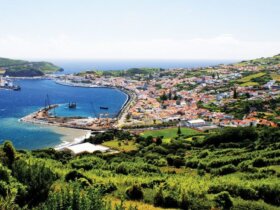 Sean Paton Shares His Thoughts on Being All At Sea

One of the most painful aspects of world cruising is clearing-in and clearing-out—often so unnerving that I avoid it whenever possible. For example, if I leave St. Thomas for the States, I have to sail directly to an official port of entry on the East Coast and clear in. Often, they aren’t used to dealing with yachts. They might make a big deal of it—even bring the sniffer dogs and other cop-stuff they want to learn how to use or show off. This can take a lot of time. Instead, I sail from St. Thomas to  San Juan, check-in there (a five-minute, friendly procedure) and then can sail anywhere in the continental US without the need to re-clear. (I’m not sure if this is still legal—but it was common practice back-in-the-day.)

Yes, I’ve learned a lot about clearing-in during 4 circumnavigations and 60-some years of international cruising—mostly I’ve learned what-not-to-do.

For instance, have all the documents and information you need—but never show them anything until requested. Know exactly what the official charges are before you go. Dress well. Be polite. Respect the officials—and remember that, no matter how badly they are behaving, they can behave much, much worse.

Think I’m joking? In Oman, we had ‘to prove we weren’t terrorists’ to get an official permit to dive in the water to clean the barnacles off our prop—an expensive, time-consuming bureaucratic task.

Whatever you do, don’t ask officials stuff like, “Would you like to see our cat’s health certificate?” or “Do you want to know why our passports are expired?” unless you have deep pockets.

One corrupt South Pacific official attempted to charge us $50 for a ‘navigational light fee’ in a single-island country that had no lights. When I refused to pay, he smiled and said, “Well, you can’t blame me for trying, can you?”

That particular island nation was cray-cray—it had an ‘international terminal’ at the airport but no domestic terminal. The joke was, if you wanted to not pay someone back money owed, you requested they meet you at the domestic terminal. This tiny island is a full-fledged member of the UN and has the same power, vote-wise, as the US of A. Thus all the officials take bribes from free-spending foreign countries like Japan so Japan could—oh, slaughter whales, for instance. China paid for their entire bus system—even though you could walk the entire length of the island in less than an hour. Oh, and Taiwan was handing out vast sums of money too—for what reason, no one knew nor cared to ask.

In the mideast, the standard bribes were whiskey, cigarettes, and (most desirable of all) ‘gentlemen’s magazines’ which had no pics of gentlemen whatsoever that I could find.

Another hustle was the ‘fumigation’ scam. One official in Ecuador charged $25 for a mandatory ‘fumigation’ of your vessel. The guy (his brother-in-law) that comes out to do the deed tells you that the insecticide is a strong, deadly poison and might kill you if you sleep below and close-up the boat in heavy weather. Solution? For a mere additional $25, he will NOT fumigate your boat and pretend he did…by slightly spraying an exterior chainplate. 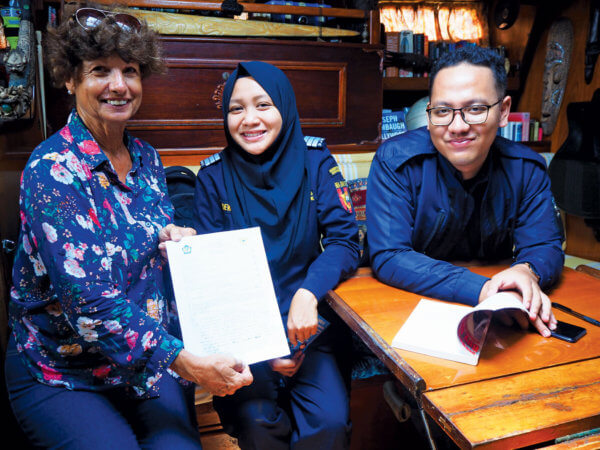 In that same country I had a very hard-nosed guy attempt to scam me by locking my ship’s papers in his safe and saying, “You’ll never get your original USCG documentation back without paying me—and you can’t travel port-to-port without it. Ha ha, you’re screwed, dude!”

I immediately left the Galapagos without clearing out—and had Carolyn grab a fresh copy of our documentation from the dozens we carry. At the other end, 3,200 nautical miles away in Hiva Oa, the officials just waved us through as we truthfully explained our predicament. We weren’t the first to tell them those identical details. (Hint: You can’t photocopy your USA documentation but you can take a picture of it and then photocopy that… without the big blue VOID showing.)

Of course, the big threat is drugs—officials will bust you for drugs.

Indonesia officials are very imaginative. In Lomak, they bring a guy aboard that inspects everything on the boat with a ‘use by’ date—and then threaten to charge you with ‘drug offenses’ if your adult aspirins are a week out of date.

In the Philippines, Custom officials are so greedy that—when we were there—everyone just cleared-in solely to the happy-and-suddenly-richer  harbormaster.

One Custom’s guy, while searching the boat, would asked every time he noticed we had more than one of something, “Can I have your extra?”

The best, most elaborate scam in the world that we know of was in Madagascar, where a fake-but-distinguished gentleman in a fancy suit in the police department arranges for you to take a fake taxi to a fake hospital (well, it was a hospital in WWII, before the roof caved in) to pay fake fees to a fake doctor surrounded by fake patients in arm and leg casts and hobbling around on crutches. All in all, to scam $20 bucks, five people worked for more than an hour—before driving off laughing in the fake taxi, stranding us many non-fake miles out of town. Even worse, when we returned to the police station to complain, they openly laughed and said, “Well, there’s a sucker born every moments, isn’t there?”

What, exactly, is the name of this god-forsaken place in Madagascar?—wait for it… Hellville! (You can’t make this stuff up!)

Strangely, we made friends with the baddest of the bad dudes in Hellville. Their heavyweight boxers hang around the dinghy dock. By port law, they’re allowed to watch your dinghy for one dollar a day. (Otherwise, ‘unguarded’ dinghies are sunk immediately—nobody, ahem, knows by whom.) The problem isn’t the one dollar, per se, it is the method in which it is collected. The moment you crest the hill, all the heavy-weight boxers square off into twos—and attempt to beat each other into a bloody pulp. It’s brutal—no boxing gloves. Winners immediately face off with other winners—and the last man standing gets your dollar. Unfortunately, they were still fighting when we arrived and almost knocked Carolyn, my wife, into the water. I was angry. Without thinking, I yelled the MF word, referring to sex-with-their-mommies. They knew no English, but often listened to American rap music. When I swore at them, the remaining two bloody boxers stopped in mid-swing, and asked me, by pointing to themselves, if I’d accused them of being… mommy jammers? I replied I had. I’m not sure if they knew what the word meant but they sure loved being called it! Everywhere we went after that, large guys with muscles loudly called us MFers and we called them MFers while jovially and joyously high-fiving each other.

Yeah, Madagascar  is truly a strange place. The lemurs there make more sense than the people.

One thing you want to do if you’re dealing with corrupt officials is determine the exchange rate early. I almost lost all my front teeth refusing to pay a 50,000-something-bribe. They were taking me down into the basement, armed with rubber hoses—until Carolyn brought me to my senses by shouting, “It’s 17 cents, Fatty!”

The saddest case we came across was in Central America—where a skipper on a fine gold-plater died of natural causes. His distraught wife called the EMTs to help her remove the body—and the officials refused to allow her back aboard because… the boat was registered to the dead husband and she had a different last name. She volunteered to show them her marriage certificate but the offer was declined. She was forced to fly home. By the time she was able to return with an Admiralty Lawyer, the boat was stripped—no engine, no rig, no nutt’n!

Yes, strange things happen in notoriously corrupt places. We had European friends that cleared out of Brazil and thus had to move to a ‘designated anchorage’ to give the local teefs one last shot at them. At three in the morning, the wife said to the husband, “Wake up, someone is aboard!” The groggy husband stumbled into the main cabin—only to be attacked by a small muscular man with a very large knife. Luckily, the husband managed to grab the attacker’s knife arm at the wrist. He screamed for his wife as both men went down… with the skipper on top of the teef. The wife poked her head out of the forepeak—petrified.

“Stab him,” screamed the husband, “Stab him!”

The wife was frozen.

Suddenly, the teef bellowed in fear and made a huge effort… and was now, suddenly, on top of the tiring older husband.

The wife climbed over the two men, went to the galley and grabbed a large kitchen knife from the galley drawer.

She waited until the weakening husband was slashed a couple of times with the blade top—then stabbed the teef in the back—hard and repeatedly. The teef let go of his knife—and the husband immediately buried that knife deep in the teef’s chest. Then the wife returned with a new knife, which she quickly buried between the bad guy’s shoulder blades as well.

By the end, the decidedly-dead teef looked like a gristly pin-cushion.

Now, this cruising couple suddenly had a dreadful choice—call the authorities who they KNEW were totally corrupt because they’d ALREADY ripped them off in numerous expensive and sadistic ways or… forgettaboutit! After much discussion, they simply forgot about it—except for when they were in their cups and would drunkenly tell the story at Yacht Haven’s Bilge bar. That night, far offshore, they wrapped the dead body of the teef in their anchor chain and deep-sixed the whole mess offshore. Then they sailed back to Scandinavia, sold the boat, and bought some inland rural property that had no view —absolutely no view—of the ocean!

Incidentally, Sir Peter Blake of New Zealand was killed on the deck of his boat in this same lawless area.

Actually, as scary and confusing as all of the above sounds, the thing that amazes me the most is, generally speaking, how honest most officials are. I’m merely pointing out the bad apples of  more than 60 years. The truth is that most Customs and Immigration officials are as honest as their governments—no more, no less.

Clearing into Tonga for the southern hemisphere’s winter season used to cost $4, then $40 bucks—and finally more than $400 per vessel. I kid you not—I used to clear into Tortola for a dime, exact change required. COVID-19 has added an additional layer of complexity to this whole mess. We used to clear into Thailand for a couple of bucks but the last couple we know of paid $2,500 in total and claimed they were lucky, as the price was ‘just about to go up!’

Fatty and Carolyn are currently on year #2 of their ‘COVID-19 quarantine cruise’ in SE Asia.