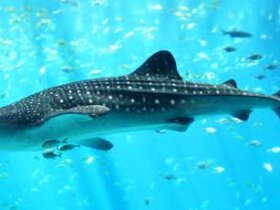 I was enjoying my coffee in the cockpit and watching another gorgeous Caribbean sunrise when I heard a great splash from behind me.  A brown pelican was successful in its dive and was bobbing his head up and down to move the fish from the pouch of his basket-like beak into his gullet.  Water drained from the corners of its mouth during what looked like a neck-stretching exercise…I guess he needed to do something with the water in his pouch because his stomach certainly could not hold the fish and the three gallons he had just scooped up.

You would think that once a pelican has a fish securely in its pouch it would be safe from piracy, but not so—gulls will try to steal the fish right out of the pelican’s pouch. The pelican itself, however, is not above stealing fish from other seabirds or taking handouts from fishing boats.

It’s time we shed some light.  Here are some Brown Pelican Facts.

The brown pelican has a six and one-half foot wingspan and weighs eight to 11 pounds.  The distinctive 12-inch bill has a large fleshy pouch that is used as a fish net, an aide in mate attraction and a cooling device. When the pelican gets too hot, it opens its bill and flutters the sides of its pouch. The tooth like structure at the tip of the bill is used as an “egg tooth” to open the egg and, after hatching, serves as a tool for preening feathers.

Pelicans are long lived (25-30 years) and their plumage changes as they mature.  For the first few years, immature brown pelicans are grayish brown and as they mature, they develop a white head and neck. Breeding adults have dark chestnut hind-necks and a yellow patch at the base of the fore-neck.  All pelicans—and no other birds—have a totipalmate foot or “oar foot,” one in which all four toes, including the hind one, are united by a web of skin.

Brown pelicans build rough stick nests in colonies adjacent to coastal areas. The nest can be built on the ground, in a tree (often mangroves) or in a bush.

Brown pelicans were on the US Endangered Species list from 1970 to 1984.  The widespread use of DDT caused eggshell thinning and a severe decline the population.  The ban on DDT led to a population recovery and the antics of brown pelicans can now be enjoyed at many anchorages in the Caribbean.

Devi Sharp is a retired wildlife biologist and is exploring the birds of the Caribbean with her husband Hunter on their sailboat Arctic Tern.

Hope for Haiti – Volunteer and Change the World

Sailors can learn, and volunteer, with organizations such as the non-profit, Hope for Haiti. Give back while Cruising! Best of both worlds...

The Gittings Trap for Lionfish Hunters

The Gittings trap is made of netting attached to a circular frame. The trap’s hinges let it open and close like a person’s mouth when eating