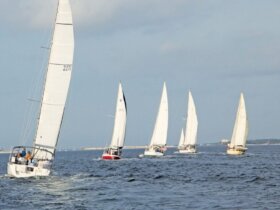 The first race of the 2008 Anguilla Regatta got off to a shaky start for Hearts Desire, the 1925 Alden Schooner, skippered by an American, Glen Schroeder.  Glen had invited me aboard for my first racing experience and I joined the green crew in their crash course in sailing a gaff rigged vessel.
No one could remember if the warning signal for the race’s start would be fired ten or five minutes before the race began.  Ten minutes was settled on and we realised our mistake when we saw the other competitors streaming over the start line ahead of us.  We began last and remained so for the duration of the ‘Beach Jam Course,’ which covered 26 nautical miles of Anguilla’s spectacular, beach dotted coastline.

Glen was a laid back captain.  When it became clear that we would not be able to catch up with the other competitors, the race became a leisurely sail in perfect sailing conditions.  He took time to show me how to handle the jib ropes when the vessel tacked.  “As soon as you hear the rattle [of the sail], bring the jib in,” he instructed.  “Let me show you,” he demonstrated how to twist the ropes, “that makes it tighter and that makes it slacker,” he explained, then laughingly said, “I don’t even think about that stuff when I do it.” Glen has owned Hearts Desire for five years and has sailed since he was a year old.

The race was won by Colin Percy in Antares in the Cruising class, Frits Bus in Pelican Marine Residences in the Spinnaker class, Anguilla-registered Juluca, skippered by Steve Donahue in the Open class, and by Herve Harel in Harel Yachts in the Multihull race.  Hearts Desire received loud applause when we eventually finished, over an hour later than the last craft.  Glen thanked the waiting race officials for “not giving up on us and going home!”

The Anguilla Regatta is run by the Anguilla Sailing Association (ASA) and the Anguilla Tourist Board, with assistance from the St Martin Yacht Club.  It funds the activities of the Anguilla Youth Sailing Club, which teaches young sailors their craft.  The second Alden Schooner in the Regatta, Charm III, captained by Richard West, had Club members crewing, their average age just thirteen years.

The Regatta featured races over three days, with exhibition races including the thrilling West End Cup and the hotly contested ‘Battle of the Banks,’ both featuring twelve metre vessels crewed by staff from local businesses.  The Sir Bobby Velazquez Local Boat Race was eagerly anticipated and followed by a flotilla of small boats, their passengers shouting encouragement to the crews.  When Eagle was forced to sail inside one marker, there was hot debate and much indignation.

Of the regatta, Peter Parles, ASA President, said, “We had a great response from all the racers.  We had an Anguilla boat take first prize in the Open class (Juluca) and we had a boat from Antigua travel a long way, with an Anguillian crew.  They took first prize in the Cruising class (Moonshadow) and in the Spinnaker class we had a lot of old favourites.  It was very, very competitive. We are really happy to have these folks come in to spread the word that Anguilla is a great sailing destination.  The Anguilla Regatta is like the old fashioned Regattas of the Caribbean, we want it to grow but we do not want it to grow too much because we do not want to take away what makes it special.”