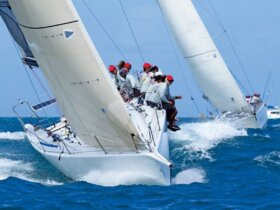 The J35 Dash won the Aruba International Regatta, making this eight wins in a row.

Some 40 vessels from around the ABC Islands crewed by people from Puerto Rico, Curaçao, the US, the Netherlands and Belgium, participated in the event that was characterized by shifting winds ranging from 15 knots to 30 knots.

Dash, formerly from Curaçao but now sailed by the Aruban Eric Mijts and his team, including veteran sailor Anita Aerts, fought hard to win Racing Class, and it was close. Dash finished ahead of his Curaçao rival, Jenk, a J105 skippered by Capt. Remco van Dortmondt, and the Swan 441R Casse Tete under the command of Captain Edwin Versteegh. Only 28 seconds separated the three boats in the decisive fifth and last race of the regatta.

First place in Cruising Class went to Curaçao’s Winfried Merkies’ Melody, while Vejigante, skippered by Pedro Marcucci and sailed all the way from Puerto Rico, captured second place ahead of Aruba’s Arjen Wassenaar and his Gibsea 402 Gitana. It was Aruba all the way in  Open Class – Eric Maris led the charge with Robaina, followed by Rik van der Vaart’s self-built John Welsford Pathfinder Vanessa and the Yankee 38 Bintang, skippered by Richel Gerfen.

Competition in the Sunfish races was tight. Job Laboyrie managed to win a decisive first place in the fourth race, pushing Randy Brown into second place and leaving no hope for a win for Richard van der Wal, who has topped this class seven times.

The seven competing Beach Cats took a beating in the heavy winds. When racing was over, Aat Hoek and Henk Steenbergen had the winner’s cup, junior sailors Jort Hartmans and Matthijs de Kool finished second and Diederik Kemmerling and Myrthe de Haan third.

The Qube Cup went to Sam Bonnevalle, followed by Emanuel Simon and Jaysley Kock. The all new F-11 class was won by Angelo Fingal with seven bullets in eight races. Fingal was followed by Morris Hoveling and Stijn van Dishoeck.

The Aruba International Regatta again received gold status from Sailors for the Sea – Clean Regattas and, living up to that expectation, sustainability officer Anita Aerts set up a number of campaigns to promote and stimulate responsible resource management during the event. Symbolizing this effort, the coveted regatta awards were produced from reclaimed plastics and wood by the Aruban sustainability initiative Brenchie’s Lab. No single use plastics were used during catering and participants and spectators joined in the effort to make the footprint of the regatta as small as possible. As a result, the volunteers charged with beach cleaning following the regatta could devote their attention to other tasks: no trace was left behind. All cans were collected to produce the awards for the 11th Aruba International Regatta.

Special regatta event for 2018 was the screening of the shocking documentary Chasing Coral at the University of Aruba, followed by a panel discussion with environmental activists and NGOs.

The night concluded with the announcement by an Aruban government representative that Aruba is in the process of developing a further ban on single use plastics, including Styrofoam bowls and plates, and a ban on sunscreen lotions containing the harmful oxybenzone.

“The event brings together the sailors of different disciplines, different walks of life and from different places in the world, to celebrate sailing and friendship in a sustainable fashion. Special thanks needs to be given to the sponsors that made the event possible, and to the valuable support provided by the Dutch Marines who provided safety and support at sea,” the organizers said.