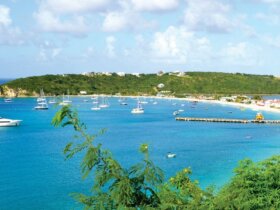 The Secrets of Sandy Ground

The British, Spanish, French and Dutch all planted flags on islands throughout the Caribbean. Yet only the U.S. Virgin Islands can claim a rich Danish heritage. This legacy was commemorated on March 31, the centennial of the transfer of St. Thomas, St. Croix, St. John and its surrounding rocks and cays from Danish to United States of America ownership in 1917.

Parades, speeches and public fanfare marked this observance as did a visit from Denmark’s Tall Ship, the Danmark. Virgin Islands residents were invited aboard for an open house-type tour and got a glimpse of present-day life on this 252ft, steel-hulled, three-masted, full rigged sailing ship from the 80 cadet-trainees on board.

“My sister’s friend, he is like a big brother to me, told me about the Danmark when I was 12 years old,” says the now 18-year-old cadet-trainee Niels Walther. “I had never stepped foot on a boat then, but from that point I dreamed of sailing on the Danmark. To prepare, I worked on a small charter ship in Denmark last summer and really fell in love with sailing. I think my instructors saw I had a knack for it. Many people, both men and women, apply for training on the Danmark, but there is a lot of competition for the spots.”

Walther and his fellow cadet-trainees, plus the Danmark’s complement of 15 permanent officers and crew, left from Lisbon, Spain earlier this year. The route to the Caribbean took them first to the Canary Islands, then on a 19-day transatlantic sail in good winds and seas, to a port call in Dominica. The Danmark arrived in St. Thomas on March 28.

There’s definitely a rich sense of history about the Danmark. The ship, built as a training vessel for Denmark’s merchant marine, was launched from the Nakskov Shipyard in 1932. Six years later, she crossed the Atlantic to New York to participate in the World’s Fair. The start of World War II soon after led Denmark to keep the ship in the U.S. to avoid capture by the Germans. During this time, the U.S. Coast Guard Academy used her to train its cadets. A bronze plaque on the Danmark marks this service and the brief time she was known as the USCGC Danmark. Today, there is still a sense of the past onboard.

“All the cadets sleep in hammocks with about 40 each in the space of a small office. We are each allotted one small cabinet and locker to keep our things. Showers are limited to one push or 30 seconds so we don’t run out of water on long voyages. One of the scariest things to some, especially in bad weather, is going up to set the sails. But, if we don’t, we don’t move as we should,” Walther explains.

The Danmark has a complement of 26 sails as well as a 357-kW engine to maneuver when winds are light. However, the teamwork involved in setting and changing the sails is all part of the cadet trainees’ education. Navigation, rules of the road, practical seamanship, firefighting, environmental studies, marine technology and safety at sea are a few of the other training topics cadets receive while underway. A year of sea-going service, including time on the Danmark, and attendance at a navigation course or 20 week finishing course at Denmark’s Maritime and Polytechnic College, which operates the Danmark, is what it will take for Walther and his fellow cadets to earn a certificate as an able-bodied seaman and join Denmark’s maritime workforce.

“When I am on land, I want most to be back on the Danmark at sea. It is something that gets in your blood. Denmark has strong maritime heritage. After all, we are a nation of islands too,” says Walther.