Municipal marinas in the Florida Keys boast plentiful amenities and prime locations. Two are like country clubs in terms of their offerings. Special events with live music and arts and crafts often are held on the adjacent community park grounds, or within walking distance in the case of Key West. While the incorporated cities did not set out to own marinas, the properties they purchased for parks contained marinas and suddenly, local governments were in the marina business.

Islamorada, Village of Islands, incorporated Dec. 31, 1997 and set out to find a location for a park, and perhaps, a village hall. Acreage on the Florida Bay known as Plantation Yacht Harbor was for sale. It had hotel rooms, a marina, tennis courts, pool, a bar and restaurant. Negotiations ensued and the village acquired the land in 1998 for around $9 million with a loan from the state. Amenities such as the motel, restaurant and bar were demolished, but many more were added.

Today, an Olympic-sized swimming pool, splash pad for toddlers, four diving boards and a slide help cool off boaters and residents alike at the Ron Levy Aquatic Center within Islamorada Founders Park. A net by the beach enables golfers to keep their swings in shipshape. Another net enables beach volleyball; a basketball court calls to dunkers, and groomed fields encourage baseball, lacrosse and soccer players to practice regularly. A new pickleball court and tennis courts provided in 2003 beckon as well. A boat ramp, dog park, marina bathrooms and barbecue area for boaters near the marina office aim to keep everyone in good spirits. A Village Hall was erected near the highway in the park as well. 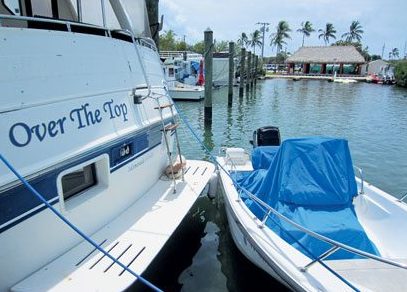 Frequent events at the park and the amphitheater feature music and art booths while easy-listening community bands play monthly during the winter season.

Marathon incorporated in 1999. Its Boot Key Harbor City Marina’s mooring field consists of 226 permanently-attached, engineered mooring systems that securely hold vessels up to 60 feet in length. Vessels wishing to dock in the marina canal must contact the marina office since space is assigned on a first-come, first-served basis; there are no reservations. Generally, the marina is full during the busy winter season and friendly communal celebrations spring up for holidays. 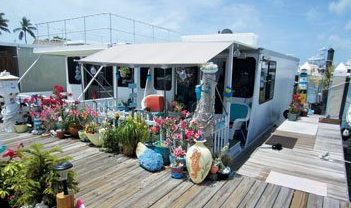 Continuing southwest in the chain of islands that comprise the Keys, the final municipal marina is Key West’s City Marina at Garrison Bight. It offers 245 slips and is on the north side of the island, but within biking and walking distance to local attractions. It is home to the Historic Charter Boat Row and its maximum vessel length is 70 feet. Slips are available for live-aboard, recreational and transient customers who wish to stay long- or short-term. The marina offers 24-hour security, power (30 & 50 amp), wi-fi, water and trash removal; bath, shower and laundry facilities; pump-out service and trailer storage. See www.citymarinakeywest.com.

City Marina has received nine five-star (highest rating) reviews, stating, for example, “Absolutely the best marina in Key West. I have my boat dry racked here and would not think of going anywhere else… Outstanding team and customer service.”

Jill Zima Borski is an Islamorada-based writer and artist and her website is www.jill-zima-borski.com.