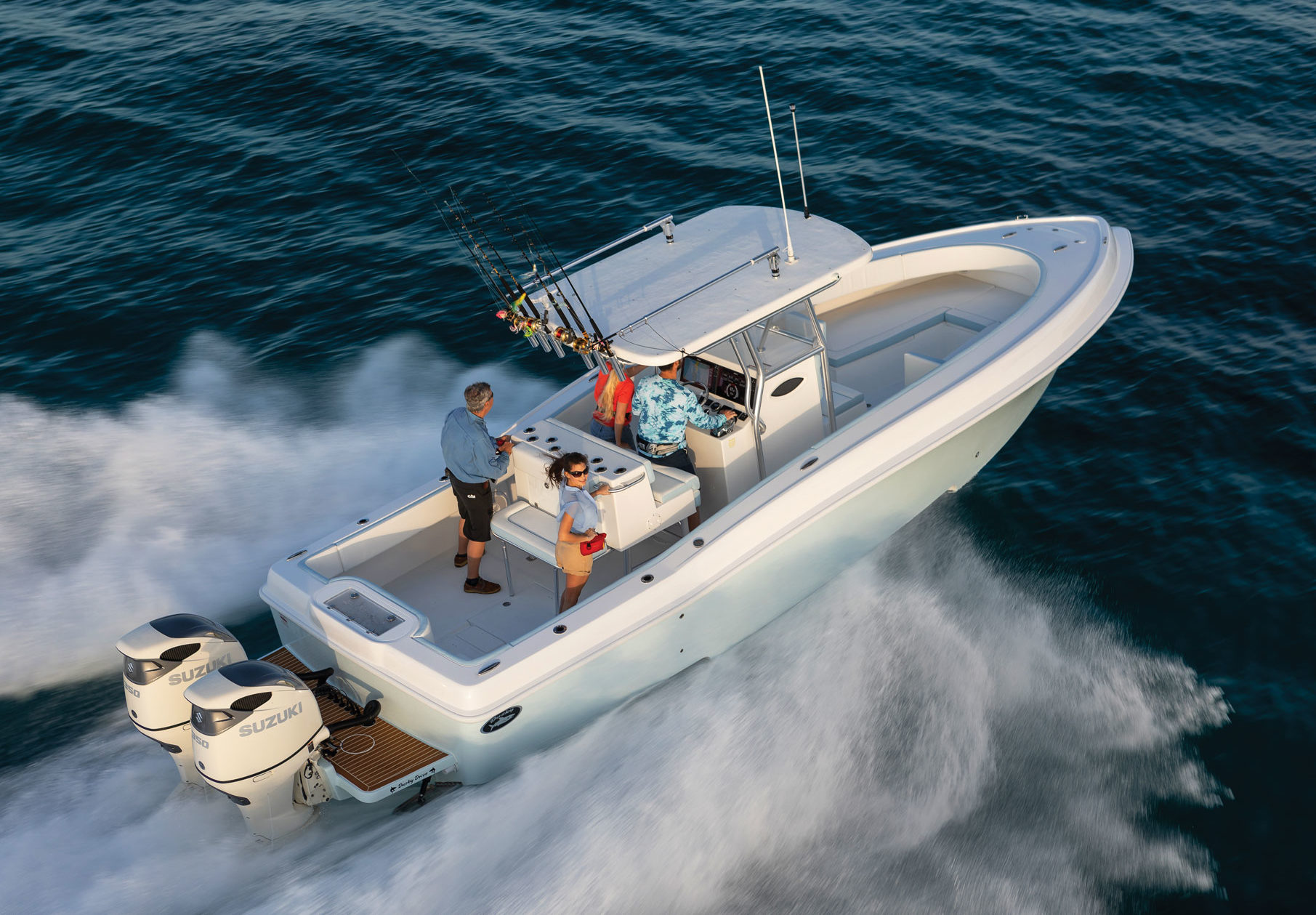 Suzuki had a great year in 2019 with their newly designed and immensely popular DF350A outboard. It looks as if 2020 is going to be even better for the company with their introduction of the all-new DF300B, the DF200RSS and the DF150RSS. With this line-up of high performance and efficient outboards Suzuki is seeking to gain market share in a very competitive market of boaters looking for more power along with increased performance and efficiency.

Having designed the DF350A from the ground up with new technology and engineering Suzuki had realized their goal of creating an outboard that was desired for larger and heavier boats that required more power and performance from an outboard. According to Suzuki creating the power (350HP) was not the issue, but rather the challenge was getting that power in a package that could transfer it to the water, allowing the boat to perform at its peak capabilities. Their engineers went to work and ended up with an outboard with a wide array of technological innovations that firmly placed the power where it needs to be, in the water. They called their project GEKI, which translated means Parting Seas.

The foundation of the project was a 4.4-liter V6 engine that would produce 80 HP per liter. They achieved this by increasing compression to 12.0:1, which was the highest compression created in a production outboard. In order to avoid knocking and get the fuel where it needs to be and at a temperature that would assure the best performance dual injectors were developed for each cylinder. Getting the dry and cool air that also needs to be delivered to the combustion chamber also proved a challenge. Engineers were able to do this by developing an all-new dual intake and louver system that draws air from outside and removes all the moisture, delivering cool dry air as needed. Even the piston heads were redesigned with an expensive to produce but extremely effective shot peened piston face that could easily withstand the additional lateral pressure created by this high output outboard.

With the necessary power created in the powerhead engineers went on to design the gear case and prop system. More horsepower typically requires a bigger gearcase, which in turn means more drag and weight. To get around these issues engineers developed a new slim profile hydrodynamic gearcase with dual water intakes. They were also able to reduce the gear size by adopting their Contra-Rotating Propeller. Because of the innovative design of the propellers better “grip” in the water maximizes the power transmitted to them through the 2-stage gear reduction. The engine torque is evenly distributed between the two props, offering exceptional thrust and performance.

There are many other innovations found in the DF350A, such as Suzuki’s Lean Burn System. By predicting how much fuel is going to be needed this system allows for the most practical combination of air and fuel ratios. This in turn allows for the most fuel-efficient operation possible at idle and cruising speeds. Combined with Suzuki’s electronic throttle controls the operator can finely tune the amount of throttle needed even at low RPMs. Combined with Suzuki’s version of variable valve timing and self adjusting timing chain the DF350A is proving to be an outboard with exceptional performance and efficiency.

With the recent announcement of the DF300B and the DF200RSS/DF150RSS Suzuki will expand on their line of “Ultimate Outboard Motors.” The DF300B is based on a 4.4 liter displacement engine with a 10.5:1 compression ratio with duel fuel injectors. Designed to run on 87 octane fuel this motor is able to reach its performance and efficiency capabilities without the need for higher octane and more expensive fuel.

The DF300B also shares other innovations with its bigger brother, such as the contra-rotating propeller system. This propeller system allows for all the advantages mentioned above as well as better hole shots and improved mid-range acceleration. Both top end performance and low speed maneuvering see improvements with these motors equipped with the twin propeller system. The offset drive system, along with Suzuki’s innovative direct air intake system, and Lean Burn Control System all make this new engine an outboard worth considering. Because of the offset driveshaft this motor is surprisingly compact with a weight forward design. Weighing just 727 lbs for a 25” shaft model this motor is a great choice for today’s heavier and larger boats requiring a single or dual outboard configuration. Easy to rig and utilizing Suzuki Precision Control drive by wire combined with compatible multi-function display screens this motor is at the pinnacle of today’s technology.

The all-new DF200RSS and DF150RSS expand on their predecessor’s virtues. These inline 4 cylinder models with a 175 cubic inch powerhead with dual overhead cams now have a 2.0:1 gear reduction producing impressive hole shots, getting boats up on plane faster than ever. Equipped with Suzuki’s new Watergrip Sport propellers the combination allows for impressive acceleration from idle speeds across the mid-range and all the way to the upper end of the throttle range. Lightweight boats will certainly see an advantage with this combination. With 10.1:1 compression ratio, Multi-Stage Sequential Fuel Injection as well as variable valve timing throttle response is more reactive and responsive. Fuel efficiency is also improved with this technology. Boats requiring these types of outboards are demanding more from their alternators and these new outboards do not disappoint. A 44-amp alternator can produce needed power and is designed to produce the most output at lower RPMS, when it is needed most.

Suzuki’s new line of higher horsepower outboards places them in the upper echelon of viable choices for boaters looking for technology that delivers a high level of performance, efficiency and reliability. With their new introductions 2020 should be a great year for Suzuki.