It started in Miami, Florida in 2014, spread to the Bahamas in 2019 and the Caribbean could be next. Stony Coral Tissue Loss Disease (SCTLD) is a new lethal disease that can affect some 30 coral species, including brain, pillar, star, and starlet corals. The disease spreads and kills corals quickly. The disease’s cause is unknown, but there are ways to prevent it and its spread. 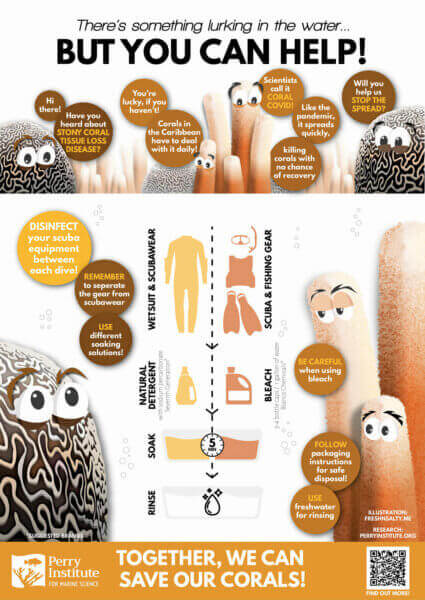 “In March, we received a three-month research permit from the Government of The Bahamas to dive in and give life-saving treatments to the nation’s coral reefs. Preliminary surveys off Grand Bahama show alarming mortality rates of 80 to 90% for several shallow-water coral species. Thus, we’re working to extend these permits as coral reefs are the lifeblood of this nation’s blue economy,” says Lily Haines, communications director and research associate for the Perry Institute for Marine Science, based in Waitsfield, VT.

Haines adds that nearly half of the Caribbean’s reef-building coral species are susceptible. Sightings of SCTLD in the Caribbean can be reported to: www.perryinstitute.org/reportsctld

Tips for Cruising with Pets in the Caribbean

In the meantime, “we must limit how the disease is transported by humans. Commercial ships need to properly exchange ballast water. This can prevent the spreading of SCTLD between regions. Small boat drivers should also be careful not to carry any bilge water between reefs; bilge water must be disinfected with a natural detergent and released into open water. All gear, including fishing and scuba gear, should be sanitized by dunking it in a bucket of sodium percarbonate and seawater before moving to another location. Sodium percarbonate is commonly found in eco-friendly laundry detergent (like Earthbound Elements, 7th Generation, Tru Earth),” says Haines.