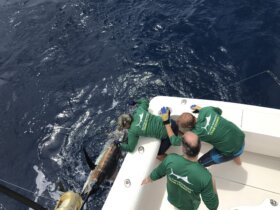 The first time was a charm for
St. Thomas’ Adam Turbe,
who’s been winning Virgin Islands Gamefishing
Club tournaments since he was a kid, but had never before angled in the
club-hosted 6th Annual Caribbean Auto Mart Wahoo Wind-Up, held
November 13. Fishing aboard the Double
Header, a 40-foot boat in the St.
Thomas sports fishing charter fleet, Turbe hooked into a whopping 53.5-pound wahoo.

“When the fish took the bait, it looked like a big strike,” Turbe said. “The fish lit up in color and raced away
from the boat.”

Turbe put the heavy drag on the reel and fought to get the
fish to the boat before taking too much time away from his fellow anglers who
were in the process of also catching wahoo at the
time. As the whopper fish got closer to the boat, team member Rob Olive and
Capt. Colin Butler properly identified it as a wahoo.
Turbe eased the fish out of the water while Olive put
the gaff in and lifted the fish into the boat.

“It
may not have won me the truck, but it won the tournament and that’s a
really big thing for me,” Turbe said.

Double Header also won Best Boat for the
most wahoo by count.

In other
angler awards, Peter Day, fishing aboard the Mixed Bag, a 40-foot charter boat out of St. John captained by Rob Richards, landed
the second largest wahoo, a 50.1-pounder.

The event
pays out cash prizes for the top ten largest fish. Anglers from
St. Croix got into the winner’s circle with Nathan
Russo’s catch of a 39.6-pounder from aboard Mutual Fun. Fellow Crucian, Harold Price, on the
Megu, landed
a 36.5-pound wahoo.

Thirty
four boats and 171 anglers from all three U.S. Virgin Islands competed in this
one-day tournament with an eye towards winning a Caribbean Auto Mart Chevrolet
Colorado 4-wheel drive
pick up truck. This prize was offered for the largest wahoo
caught weighing over 75 pounds. The 2003 winning team from the
Black Pearl did this in 2003 with a
whopping 94.1-pound wahoo.