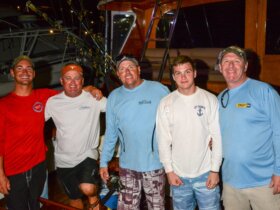 The wahoo bite in mid-November was pretty slow. But, that didn’t stop St. Croix’s Larry Kupfer from landing the largest wahoo – a 34.5-pounder – and pocketing $1000 cash in the 7th annual Caribbean Auto Mart Wahoo Wind-Up.

Kupfer, fishing aboard Mike Fennessy’s 42-foot Hatteras, Sunflower, said, “We left the dock at Green Cay around 5:30 a.m. and headed straight for the Lange Bank. Seas were fairly calm, but there were scattered rain showers and several rainbows. It wasn’t until around 10 a.m., I’d been in the chair about 15 minutes when I got a hit on the outrigger. We could tell it was a big fish right away due to the amount of line it ripped off the reel.”

After a little less than a half hour fight, Kupfer had the whopping wahoo into the boat. “We didn’t see any birds,” he said. “There were no floaters, except a bit of seaweed. But another boat, the Beloved, fished in our area and ended up catching the second largest wahoo of the tournament. So, it ended up being a pretty productive spot.”

Later, around noon and southeast of the bank, Sunflower anglers had their next round of excitement. “We had a strike and lost it. Then two more strikes and caught two small wahoo, and finally Paul Stewart reeled in a 27.2-pound wahoo that won the fifth largest prize.”

“Our biggest adrenalin rush,” Kupfer jokes, “was racing back to the dock in Christiansted to make it in time for the 4 p.m. weigh-in. We got there with just minutes to spare.”  Kupfer’s day job is President and Chief Operating Officer of HOVENSA, L.L.C., St. Croix’s oil refinery, one of the largest in the Western Hemisphere.

Forty boats and 164 anglers from all three U.S. Virgin Islands competed in this one-day tournament with an eye towards winning a Caribbean Auto Mart Chevrolet Colorado 4-wheel drive pick up truck. This prize was offered for the largest wahoo caught weighing over 75 pounds. The 2003 winning team from the Black Pearl did this in 2003 with a whopping 94.1-pound wahoo.

In other awards, Double Header out of St. Thomas won Best Boat for the most wahoo by weight, 76.3 pounds.