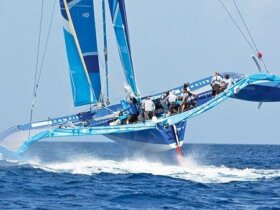 On an island
known for its glitz and glamour, where some of the world’s largest motor yachts
anchor for the winter, it’s nice to see the small wooden sailboats of Saint
Barth racing out in the harbor. This tradition began decades ago when the
island’s fisherman added sails to their little boats and raced against each
other on weekends, for a little fun and relaxation.

This tradition continues today with
colorful wooden sailboats modeled on the island’s old fishing boats, but
designed with special racing keels. After a period when interest in this sport
had declined, and the only races were on special holidays, there is now a
renewed passion for these charming little boats. For the past two years they
have engaged in a championship season,
organized by the Saint Barth Yacht Club, with races once a month, from October
through June. There is also a busy calendar of races planned for the month of
August, when local neighborhoods hold their summer festivals and the island
celebrates its patron saint day.

“Interest in these traditional boats
decreased during the 1980s, but when a new generation of boats arrived in the
1990s, everybody wanted to race,” says Arnaud Questel, longtime skipper of La Belle du Vent. One of the eight
traditional sailboats in the Saint Barth championship, La Belle du Vent was last year’s winner and took second place this
year.

For the most part, these small wooden boats
were built from Guadeloupe (except La
Belle du Vent that was built in Les
Saintes). Covered with protective fiberglass, the hulls measure 5.5 meters
(18 ft) in length, with masts 8.5 meters tall (28 ft), and two Dacron sails, a
mainsail and a jib, most of which are made by North Sails (in Guadeloupe).

Two boats are the exception to the rule: Dedet’s Girl, winner of this year’s
championship, and Budget. Both are a
newer, more-modern models, designed in the early 1990s by sailor Luc Poupon,
and built in Saint Barth. "These boats are lighter, more hydro-dynamic and
as a result faster," says Poupon, a well-known sailor who hails from
Finesterre in Brittany, France, (his brother Philippe Poupon is also a highly
accomplished sailor). Because these two boats are inherently faster, they are
given a handicap of three minutes per hour in every race.

Luc Poupon has lived in Saint Barth for the
past 20 years. He has made over 40 transatlantic crossings, including four
entries in the Ag2r, a bi-annual race from L’Orient, France to Saint Barth (the
next edition takes place in the spring of 2006). When he is not racing, he
serves as the representative for North Sails in Saint Barth.

Depending on weather conditions, the
traditional sailboats take a crew of four to five in light winds or up to six
or seven in heavier winds. "We always have the same crew for Dedet’s Girl," says Poupon, indicating that this solidarity is one of
the reasons they win so often. "The other boats are always missing
someone. But when the crew is motivated, on one of these small boats, it can be
a great sailing experience."

In this year’s championship, Dedet’s Girl, with Poupon as skipper,
won five out of nine regattas. The winning score is an average of points from
these nine races. The boat was named Dedet’s
Girl by its owner, Gilbert Laplace, a Saint Barth native whose mother’s
nickname is Dedet. Laplace is the owner of a large construction company that
sponsors the boat (some are privately owned while others belong to local
non-profit sports associations. Laplace’s son Christian is on the crew (and
serves as skipper if Poupon misses a race), and his grandson, Jeremy, is on the
crew as well: at age nine he is the youngest sailor to race. The crew for Dedet’s Girl also includes Sophie
Olivaud, currently the only woman to participate in the championship.

Now that the regular season is over, Saint
Barth’s charming little sailboats are ready for a rigorous month of August. The
summer races started on July 14 (Bastille Day), and July 31, continuing on
August 7, August 15, August 21 (fete of Gustavia), August 24 (fete of Saint
Barthelemy, and August 25 (fete of Saint Louis, the patron saint of the
island’s fishing village of Corossol). If it’s summertime, it’s certainly time
for traditional sailing in Saint Barth!