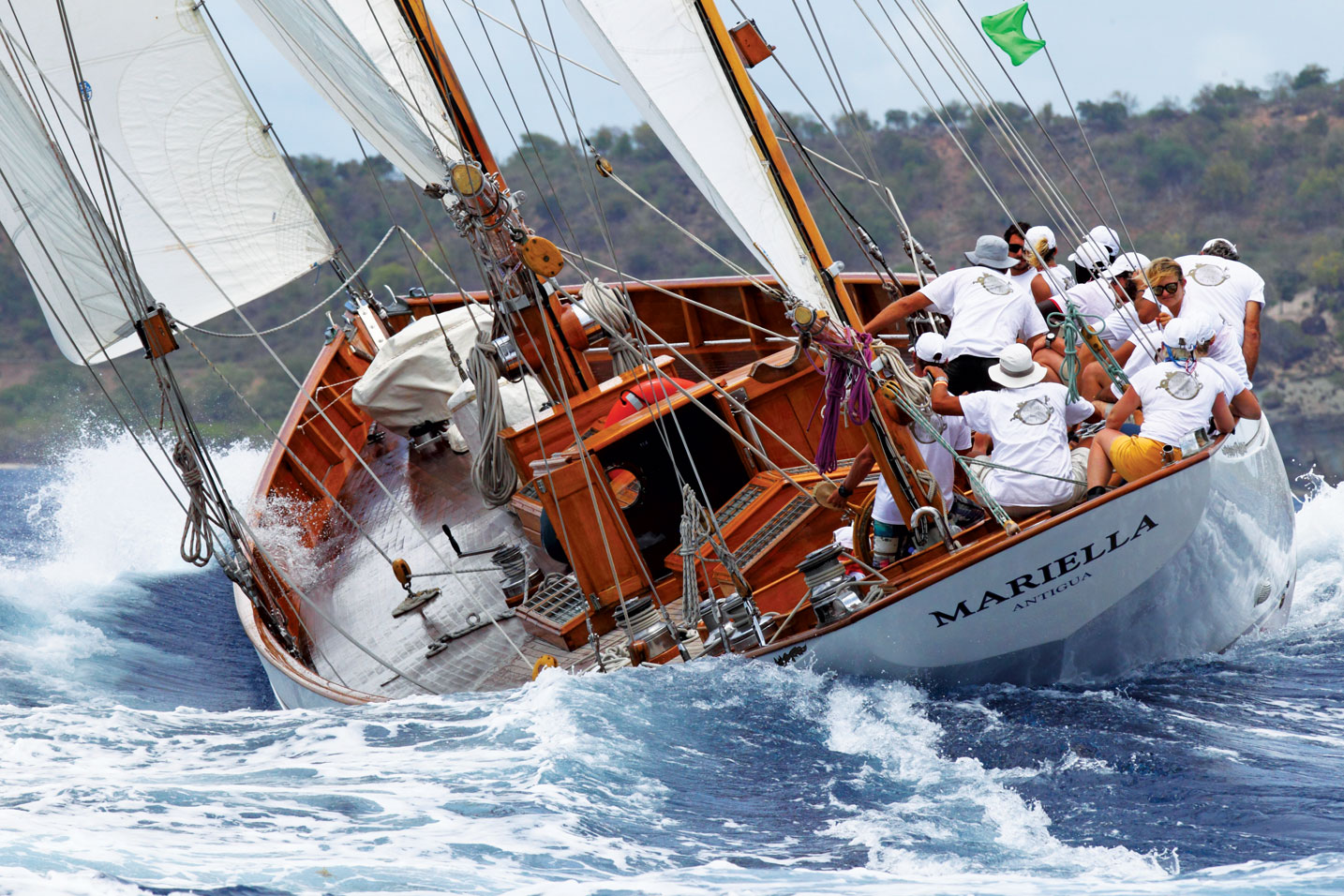 This year’s Bucket was a true coming-of-age for the regatta, which was launched in 1996 as a Caribbean race for owners and skippers of sailboats over 100’, many of whom already sailed in the original summertime Nantucket Bucket, which has now shifted to Newport, R.I. where it is held every July.

A fleet of 29 boats took part, ranging from the smallest, Donald Tofias’ 76’ W-Class Wild Horses, to the 163’ Perini Navi yacht, Perseus, as the largest entry. Three additional Pernini Navi boats included Andromeda Le Dea at 154’, Antara at 153’, and Helios at 148’. Awarded for the best performance by one of their yachts in the Bucket, the Perini Navi Cup was presented by Guila Perini to Antara.

After a skipper’s meeting on Thursday, March 27 where the rules of the race were explained, the boats were ready for the first regatta, a counter-clockwise tour around the island on Friday with Gliss, a 105’ Royal Huisman yacht taking first place. Elise Huisman was on hand for the Bucket, presenting the Walter Huisman Spirit of the Bucket Award (in memory of her father who she referred to as “a great boat builder and lover of sailing”) to the 148’ Baltic yacht, Visione—since her father loved dogs, and Visione often sails with two dogs aboard (not to mention its sleek lines and zippy performance…)

Day two, referred to as the “wiggly course”, saw the fleet navigate around the small islands to the north of Saint Barth in an Olympic triangle. The winner: Sam Byrne’s 125’ Freedom of Flight, sailing well with 25 knots of wind providing some challenging moments.

Day three was gloriously sunny with winds close to 20 knots and some terrific sailing. The boats are rated for the Bucket by boat designer Jim Teeters, who jokingly says it is done by “black magic and snake oil,” but who closely studies the design and performance capability of each boat, rating them on their race potential under maximal conditions. Day three proved his technique, as at least 10 boats finished within 3 minutes and seven seconds of each other, providing a spectacular finish with some pretty fast maneuvering of these big boats.

The awards ceremony was led by Hank Halsted, chair of the Bucket committee, who first thanked all of the sponsors including the five major shipyards that support the event: Perini Navi, Royal Huisman, Holland Jachtbouw, Alloy Yachts, and Vitters Shipyards. “The Bucket is finally what we always wanted it to be,” says Halsted. “A party thrown for the yacht industry by the industry we support.” And with 800 people in town for the Bucket, the yacht industry was in Saint Barth in force.

In addition to the racing, singer Jimmy Buffett (who was dressed as a cow with udder ballons along with the crew of Rebecca during Saturday’s race) gave a rousing concert on the dock on Saturday night, to the delight of the large crowd. He even donated the T-shirt he sang in for a fund-raising event that took place during the Bucket, with a total $175,000 dollars donated to FEMUR, a 25 year-old non-profit organization that donates needed equipment to the local hospital.

The racing was great, the ambiance on the dock was superb, and the Bucket once again proved to be a major event on the nautical calendar in Saint Barth!  www.newportbucket.com

Ellen Lampert-Gréaux lives in Saint Barthélemy where she is editor-in- chief of Harbour Magazine, and has been a regular contributor to All at Sea since 2000.  She also writes regularly about entertainment design and technology for Live Design magazine, and about Caribbean architecture for MACO, a Trinidad-based lifestyle magazine.