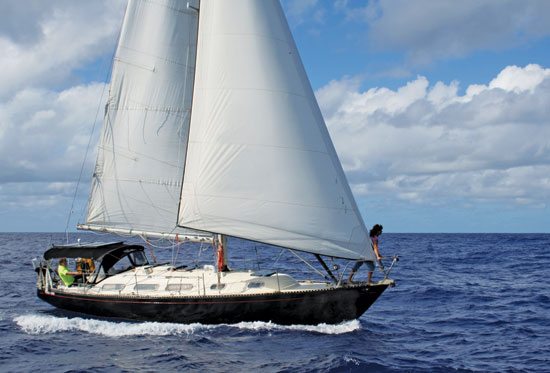 On the eve of departure for my third circumnavigation, I have a curious confession to make: I am not a very good sailor. Please don’t think I’m being modest or that I am misinformed. I am not. International experts agree. My performance under sail is best described as “flotsam.”

For instance, I was once at the helm of one of Dennis Conner’s IACC boats (Stars and Stripes) with some of the finest skippers in the world (Peter Holmberg and John Cutler, among others) when a famous America’s Cup racer sauntered up to me and said, “You’re amazing, Fatty! You’ve only had the helm for a few moments and our boat speed is down, leeway up, and we’re hobby-horsing like an Outhouse 41! Our transom is squatting, too. You’ve even managed to confuse the jib telltales – which isn’t an easy thing to do. And as far as your windward helming, well, you have all the skills of a lighthouse keeper. You couldn’t point upwind if you had twice the number of fingers. And the only way you could make us go slower is if you run us aground. Other than that, you’re okay.”

I’ve learned to live with such comments. Honestly, I have little respect for yacht racers. If they love their sport so much, why rush to get it over with?

I don’t have a knotmeter aboard my vessel. Too depressing. I’ve been passed by jellyfish. Sandbars silt in faster than I can sail to windward. On long passages I have to factor in continental drift – that’s how long I’m out there.

My wife and I just spent a couple of seasons in the Med. I hoped it would be different there. Alas, it was not. Most of the French sailors dragged faster than I sailed.

That’s right: sadly, my anchor gear has little effect on our boat speed.

Frankly, I don’t like stink potters any more than I do yacht racers. It is embarrassing –while sailing along at my personal hull-speed – to have powerboats keep swinging up alongside and saying, “Gee, I didn’t even know it was shallow here! Toss me a line, Skipper, I’ll tow you off!”

I attempt to discourage them by shooting them the seagull.

The fact is, sailing is complicated. There’s a ‘true’ wind and ‘apparent’ wind – which seems readily apparent to everyone but me. I only have one boat – why do I need two winds?

I try. I do. I really do. But I get all muddled up when the helm is in my sweaty little palms.

“You’re high!” scolded my wife recently as we beat up to Sint Maarten from the Virgins.

She frowned, and decided to ignore my fluttering jib trim. To get her mind off the luffing, she sensuously bent over to pick up the jib sheets to coil.

“Pinching!” she cried again, unable to take it anymore.

She stood back up and whirled at me. “Fall off!” she screamed.

“I’m not that high,” I shot back, glancing nervously as the water passing by the leeward side. “Besides, that’s why I’m wearing my safety harness!”

There are times when we – like Cool Hand Luke – experience a “failure to communicate.”

Now you’d think that after 53 years of living aboard and a total ocean mileage in the six figures, that I’d learn. But the only thing my history teaches me is that I learn little from history.

I seldom sail on other people’s boats because I don’t want them to know. Even so, I hear murmurs of ‘Cap’n Drogue! Mister Sea Anchor! Hard Aground Harry!” wherever I sail.

Sometimes I sort of fib about my passages. I know that, normally, ocean sailors use the time-unit of a day (24 hours) to report their performance. So what? It’s a free country! I prefer using weeks. Thus, occasionally, some confusion results when I meet the skipper of Mari Cha bragging that he crossed the Pond in 10 days.

“We took seven,” I say smugly, and would happily admit they were weeks IF he asked.  I hate modern speed instruments. I prefer the Kenyon units like I had on my old ketch Carlotta. The first thing I did while sailing along at four knots was take a little screwdriver to that tiny adjusting screw on its back and bump our boat speed up to 6-plus. Yes!

Part of the problem is that most of the time I’ve spent around spinnakers was spinnaker flying. I mean I and my peeps were flying, not the boat! Spinnaker flying is an art. All you have to do is leave your brain on deck (and have your chiropractor standing by). I mean, not everyone wants to ride a motorcycle if they desire some broken bones. Hint: If want to bring your brewski and keep your teeth while spinnaker flying,  bring your Heinie in a plastic bottle! Oh, those were wild days of spinnaker flying and water-ballooning back in the ‘60s. Once, while spin-flying, my vessel dragged into a prestigious resort. I’m alive today only because the wildly flogging spinnaker tossed me into the resort’s swimming pool. (Yes, this took awhile to figure out – especially while sinking like a stone in the fresh water. “Where’s my boat? Where’s my boat?”)

Actually, I think it was an irate husband who tossed me into that pool, but ‘68 is kinda fuzzy, know what I mean?

Yes, sailing keeps changing. I never heard of a “roll tack” when I was young, but once a sailor has experienced middle-age spread, flopping a roll or two of tummy fat onto the high side before pushing away the tiller is faster!

And you can’t win. I refused to wear sun block until my entire epidermis turned into an open sore, and now the eco-freaks inform me sun block is killing our reefs. (I doubt this is true, but a National Park ranger – with a straight-face – recently told me so on St. John, USVI.)

I’m willing to accept that, for whatever reason, I sail as slow as a half-tide rock. Still, I manage to eke out some fun on the race course. For example, I won a huge silver trophy at the Coconut Grove Yacht Club’s Columbus Day race by repeatedly anchoring. (Yeah, I’m fast/fast/fast with my ground tackle!) I kid you not. The wind dropped and the current was pushing everyone away from the finish, and most of ‘em were so fixated on sail trim that they failed to notice their slow-but-sure drift.

You should have heard my smug and smirky acceptance speech as I picked up my silver. It lasted far longer than the race!

I thought that perhaps it was the warm water, that maybe warm water was a tad stickier than cold. Naw. I sailed up to Alaska and was passed by a coastal glacier.

I try to look on the bright side. With my helming skills, I sure don’t need a speedometer. A daily calendar duct-taped to the cockpit wall works just fine. I tried everything: giant orange flames on my topsides, racing stripes, a new carbon-fiber boat hook – nothing makes my boat go faster.

This makes convoying difficult. I have to be very creative with my excuses, especially in the Red Sea. “Barnacles,” I shout into my VHF while begging the rest of the fleet to slow down and give the pirates a sporting chance. “Barnacles! And my wife might have forgotten to hoist all the anchors we had down … or mischievously deployed our sea-anchor. Who knows? Perhaps we picked up a lobster pot on an exposed keel bolt? A school of reluctant remoras? An amorous octopus?”

I should not speak in absolutes, saying stuff like “I have never sailed fast!” Occasionally, I do. I have sudden, unexpected bursts of speed. While docking, for example.

Even my wife isn’t immune to joking at my expense. I recently heard her whispering to her sailing girlfriends in Panama, “He’s slow mentally, he’s slow to earn a living, he’s slow under sail – everywhere but under the sheets!”

I hope my new boat is faster than my old one. She should be, as her transom almost has more sail area than our previous mainsail. This is first vessel I’ve ever owned which needed reef points in the topsides. Running up the companionway ladder, my ears pop.

We have ports low in the hull so we can see under the cloud cover. I had to buy a wristwatch (Casio Sea Pathfinder) with a compass, barometer and altimeter! I wear a safety harness not to prevent falling overboard, but rather so I don’t die on impact with Mother Ocean.

But my wife Carolyn isn’t so sure our new vessel is a speed demon. Every time I’m sailing along at what we call “Fat Speed” she comes on deck, smiles, and says, “Boy, she heaves-to beautifully!”

Cap’n Fatty and Carolyn are currently crawling towards the Pacific, still attempting to parse the difference between apparent and true wind.