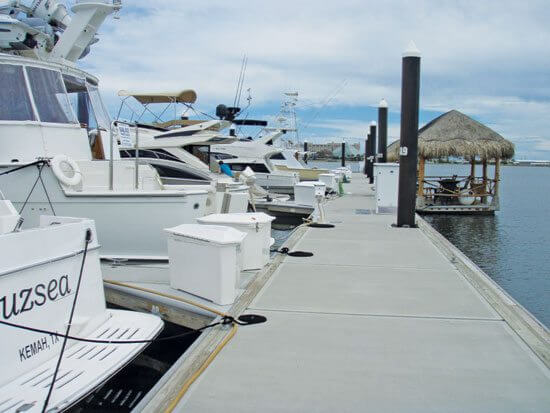 Galveston Island’s Offatts Bayou has long been a popular anchorage for weekenders from Clear Lake area marinas and cruisers passing along the nearby Intracoastal Waterway. Now those who want amenities beyond just a nice place drop their hook have another option.

Pelican Rest Marina opened in 2011 and added a fuel dock last year. In May, work began on Phase 2, which will expand the number of docks available.

With depths up to 22 feet and the ability to accommodate 200-foot vessels, Pelican Rest could open Texas up as a megayacht destination. (The largest visitor so far is the 174-foot motor yacht JR Navigator, which has called the marina home for several months.)

The complex is built on a village concept featuring extensive tropical landscaping, a pool, shoreside and floating dockside palapas, individual storage bodegas, and an upscale restaurant opening this summer. Number 13 will feature prime steaks, line-caught Gulf seafood and an extensive bar. The final piece of Phase 2 will be the construction of 18 high-end condos.

The property encompasses the recently upgraded Smitty’s Bait Camp, a longtime fixture on the shoreline that now serves several sportfishing vessels already based in the marina. Pelican Rest houses the offices of the Houston Big Game Fishing Club and is a certified International Game Fish Association Weigh Station, as well as an official Coastal Conservation Association instant entry and weigh-in location.

Galveston businessman Harry “Buddy” Schultz, a principal of Schultz Partners Ltd. which owns the marina, has become active in the Marina Association of Texas and has supported the Galveston Bay Foundation’s Clean Water Partnership project. He’s gone so far as to hang oyster bags off the marina’s piers as part of a reef re-seeding project.

Schultz has billed the property the “Gateway to Galveston.” When complete, it will help define the entrance to Galveston Island – both for cars arriving via the adjacent Gulf Freeway and for boaters looking for a great stop while cruising the ICW.