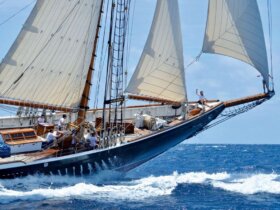 The South Grenada Regatta held February 26 to 28 had the look and feel of a carnival that no one wanted to stop. Sailors had plenty to keep them busy with two days of racing and an ample amount of dock time to rerun, review and rehash the action. The island's juniors spent hours buzzing around a course in their aptly named Mosquitoes, while those who felt the need to run, swim, laugh and act silly joined the Disney-esque Pirate's Trail that was open for business for kids 8 to 88. And just to keep things moving, attendees with a need-for-speed had the chance to bomb around buoys during the 15 HP Dinghy Time Trials.

Conditions for the first day of the regatta were as perfect as the hosting venue, Le Phare Bleu Marina and Resort. Light winds, flat seas and 21 boats mixed it up on two courses well set to test every boat and crew. The starting line for race one, set east of Petite Calivigny Island, funneled boats downwind through the shallow waters of the south coast. After rounding Glover Island, the upwind leg was a tacking duel between racers, reefs and rocks.

With four distinct classes – cruising, racing, fun and multihull – the action was well paced until the finish line where most of the drama unfolded. Several of the big boats had small crews, making it difficult for the quick succession of moves needed to cross the tight line. One two-handed crew with a four-legged friend lost control of their Genoa sheet causing them to blow a tack and stall just feet from the line. A literal traffic jam ensued, forcing one vessel to jibe around, another to tack away. Finally, the dog's people fired up the engine and motored out of the way.

Although the docks had been filled with fuel jugs, anchors and other heavy gear that has no place on a race boat, there were still elements of home on the course. Some folks flew solar panels and sun awnings. Several entrants sailed the course with wind generators spinning, causing some to wonder if that constituted an assist or a handicap.

The second contest of the day took the fleet on a more rugged course, upwind to Westerhall Bay where the rum and the day's biggest trophy originated.

While that battle was under way, another group of highly competitive sailors put on a show for spectators at Le Phare Bleu. Fourteen Grenadian Junior Sailors aged 11 to 17 sped around the protected bay, occasionally swamping and bailing like champs. Prizes, handed out after a hearty lunch, were gift certificates donated by Budget Marine. Nick George, liaison between the kids and the company explained, "We love this program. These prizes let the kids choose something that's right for them."

The first round of prize giving for the big boats took place that even-ing in the elegant pool bar with musi-cal entertainment pro-vided by The Rocking Pontoons. Lucky first, second and third place finishers took home generous prizes: binoculars, certificates for bottom cleaning, meals, rope, even an outboard engine.

Organizers invented clever ways to make certain no one went home empty handed. Categories like "most pre-race effort," "being consistently 5th," and "the least amount of hands per square meter" insured that everyone left with a win and a bottle of vintage rum. The 68-foot schooner Raindancer walked away with the prize for "happiest crew with the most varnish on," no surprise since she was the biggest and flashiest in the fleet.

Only one race was scheduled for Sunday but since the wind had increased substantially, it provided a day's worth of challenge. There were some tense seconds on the start line when several boats got sandwiched together and one took a bite, literally, out of Raindancer's stern. Owner John Whitsett recounted, "Everyone was trying. Another few inches, we would'a missed."

The offshore triangle configuration meant less reef dodging but more seas to dive in and out of before a spectacular finish inside the bay.

Somewhere between the end of the race and the beginning of the final ceremony, a line of competitors took turns in a high speed inflatable, hoping to best all times. Onshore a clock ticked as wanna-be pirates swam to a sunken ship and a dock full of challenges. Exhausted sailors limed in the pool.

For the finale, a wheelbarrow of trophies handcrafted by sculptor Renee of Act Art and Design rolled in. Speeches were made, sponsors thanked and winners announced.

Jana Caniga, race organizer and owner of Le Phare Bleu with Dieter Burkhalter, spoke of the success of this two year-young event. "It doesn't need to grow too fast; as long as everyone is happy." So far, so good. Full results and images are available at www.southgrenadaregatta.com.