THE TENNIS MATCH CONTINUES IN MIAMI
The dispute over the Miami International Boat Show moving to the Miami Marine Stadium on Key Biscayne continued in October with a pivotal match point thwarted by a crushing overhead shot down the line to knot the score once again. Early in the month a settlement agreement derived from several mediation sessions dating from April 2015, was drafted between City of Miami and the village of Key Biscayne. Under the proposed agreement, the two parties would jointly operate the facility next to the stadium through a semi-independent park conservancy as long as the village paid half the cost of the project. Also, the two parties would split the $37.5 million cost to restore the historic marine stadium. The agreement needed to go before the Miami City Commission before being finalized. On the eve of the commission meeting, the village of Key Biscayne backed out of the proposed settlement agreement then later filed additional complaints against the City of Miami.

At the Fort Lauderdale International Boat Show in November, a presentation by Miami’s city manager Daniel Alfonso and representatives from the National Marine Manufacturers Association (NMMA), which manages the show, made it very clear that the show will go on. “Nothing that anyone can see will stop this show from happening [at the stadium],” said Thom Dammrich, president of the NMMA.

With just months remaining before thousands of boat lovers descend on Miami, the match is still anyone’s to win or lose.

42ND STUART BOAT SHOW GROWS AND SETS NEW DATES FOR 2016
AllSports Productions, producers of the Stuart Boat Show in Stuart, Florida, announced the 2016 boat show will be held January 15 – 17, a week later than in previous years. “We felt the later date provides exhibitors and attendees an extra week to recuperate from their busy holiday season,” says Skip Allen, Allsports Productions President, who adds that many new attractions have been added to the 2016 show.

The family friendly show features new powerboats, engines, electronics, accessories, and classes and clinics for adults and children, including:

• Boating Safety Classes – An exclusive U.S. Coast Guard boarding reenactment will demonstrate the safety equipment you must have on board and how to use it.

• “Hook the Future” – A fun fishing clinic for the whole family; there’s something for everyone to learn, and a free rod and reel for the kids.

As part of the transaction, Suntex has also acquired the assets and personnel of Suntex Waterfront Advisors (SWA), a premier manager of marina properties. The combination of equity commitments and third-party debt financing will provide Suntex with over $500 million of buying power to acquire domestic marinas.

The company also announced that Bill Anderson, president of Westrec Marinas, joined the Suntex Board of Directors bringing with him over 30 years of marina industry experience. Westrec is the largest manager of marinas in the country with such prestigious assets as the Harbour Towne Marina in Fort Lauderdale and Holiday Marina on Lake Lanier, and the management of the Chicago Harbors for the City of Chicago.

“We see Suntex as the primary consolidator in the industry, with a focus and culture very similar to our own,” said Bill Anderson. “Suntex Marina Investors has an excellent leadership team that will provide the foundation for continued success in the marketplace.”

Suntex CEO Johnny Powers stated, “With the completion of this capital raise, we are financially poised for rapid growth. Increasing our portfolio will not only benefit investors, but we are confident that by extending our high standards of customer service to additional marinas, the boating public will also benefit from the Suntex approach: Improve the customer experience by offering superior hospitality services that are unique in the marina industry.” 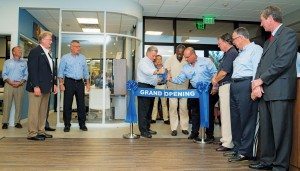 Originally constructed in 1989 and well maintained through the ensuing decades, the showroom still retained its impressive appearance. However, it was considered badly in need of updating. A second floor water main break precipitated the decision to remodel the 7,500 square foot showroom and second floor office spaces.

“Our renovations were significant, both financially and cosmetically, considering both levels of the building were completely gutted and remodeled,” said Kyle Roney, MarineMax Pompano General Manager. “We also added a new Customer Lounge, landscaping, lighting, sound system, and waterfall element and replaced the wood deck of 15 docks with synthetic decking material.”

“We are pleased that we are continuing to grow the business. However, we perceive and embrace that at the end of the day, our true measure is customer satisfaction. This is why we have structured our business to deliver boating, as opposed to simply selling boats. By offering opportunities to expand our customers’ boating knowledge, providing phenomenal opportunities to use their boats and delivering exceptional service, we ensure that our customers enjoy the best total ownership experience anywhere,” added Roney. 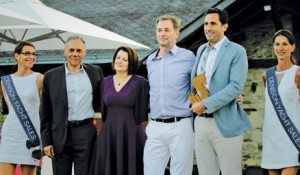 “Strengthening our existing partnership with Denison Yacht Sales towards sailboats is a logical decision,” commented Beneteau America President Laurent Fabre. “Denison’s success story with our powerboat brands will translate into outstanding customer service – from research to purchase, delivery and beyond – for sailboat buyers in Eastern Florida,” Fabre added.

The Denison family has been trusted in the yachting community since 1948 when Frank Denison founded Broward Marine, in Fort Lauderdale. Bob Denison, general manager for Denison Yacht Sales explained, “Our family strives to create relationships with builders that share our passion and our values. As a family-owned business, Denison Yacht Sales is thrilled to expand its relationship with one of the largest boat builders in the world, and certainly one of today’s most reputable family-owned shipyards.” 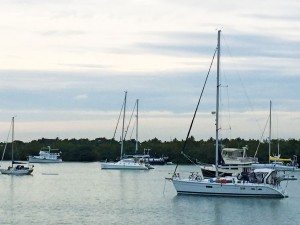 ANCHORS AWEIGH?  By Ann Eichenmuller
Lawmakers are once again floating the concept of state imposed anchoring restrictions in Florida waters. Cruisers and liveaboards breathed a sigh of relief earlier this year when the legislature ended its 2015 session without taking a vote on SB 1548. In late September however, the State Affairs Committee of the Florida House of Representatives announced a workshop session in Tallahassee to hear testimony on whether the legislature should pursue new laws to address conflicts between landowners and boaters. The majority of public comment at the October 8 meeting focused on the perceived negative impact of cruisers on local communities. Homeowners, public officials, and law enforcement officers argued that cruising boaters do not contribute substantially to the local economy and questioned their impact on water quality and on the land owners’ rights to the enjoyment of their property.

According to one official, boaters are essentially “vacationing in someone’s backyard;” another characterized cruisers as treating the waterway as if it were “the campground of America.” Boaters countered that the majority of cruisers use moorings and marinas as well as anchorages, and their time ashore is an unappreciated source of revenue that includes money spent in stores, restaurants, and other businesses. Brian Davidson, spokesman for Seven Seas Cruising Association, argued for a common sense approach to developing restrictions, noting that any solution should target specific problems in affected areas rather than penalize boaters statewide.

Based on the opinions expressed at this workshop, the boating community will need to mobilize increased public support if it hopes to safeguard its right to swing on the hook. The next few months leading up to the 2016 legislative session will be pivotal in determining what types of restrictions may be imposed. Organizations and individuals interested in protecting access to Florida waters can contact the Concerned Cruisers’ Committee at [email protected] to get up-to-the-minute information on hearings and legislation and learn how to become a voice in the political process.