ALL AT SEAThe Caribbean\'s Waterfront Community
HomeDiveSouth Florida News: Marine Tourism Gets A Boost From A Sinking In...
DiveFloridaSouth Florida

South Florida News: Marine Tourism Gets A Boost From A Sinking In The Palm Beaches 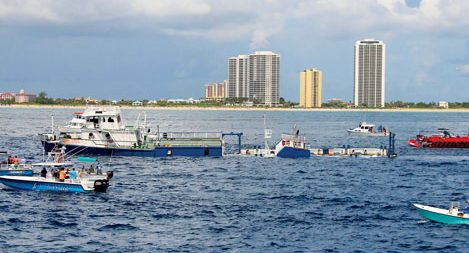 Marine Tourism Gets a Boost from a Sinking in The Palm Beaches
The Ana Cecilia cargo ship, once used in both an attempt to smuggle $10 million worth of cocaine on the Miami River and as the first ship to carry cargo from Miami to Cuba in 2012 after 50 years of embargo, now has a new destiny underwater in The Palm Beaches as an artificial reef.

The ship, a 170-foot Halter Marine general cargo ship built in 1972, was sunk on July 13, a little over a mile off the Lake Worth Inlet in 85 feet of water (coordinates: 26 47.118/-80 00.960). Here, it is part of the artificial reef system managed by the Palm Beach County Department of Environmental Resources Management.

It will soon become a diver’s dream, bustling with underwater activity as it is colonized by the algae, sponges, and corals that support sea life such as Goliath Grouper, sea turtles, thorny oysters and green moray eels.