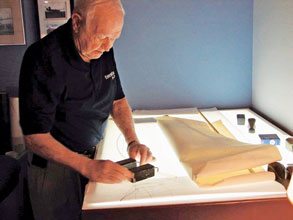 Industry Mourns Pioneer Bob Dougherty
Bob Dougherty, a marine industry pioneer and legend, passed away peacefully with his family at his side on March 23, 2016 – he was 85. Nicknamed “Mr. Unsinkable,” he refined his craft of boat design and build with a steadfast philosophy: people should be able to enjoy boating safely, regardless of sea conditions.

Bob first started building boats when he joined Boston Whaler in 1960 as Chief Engineer. Bob soon became Chief Designer and Senior Vice President of Engineering at Boston Whaler. Over 30 years, Bob was influential in the development and design of the Boston Whaler product line. Following his time at Boston Whaler, he started and built Edgewater Power Boats, which he ran until 1995, a stepping stone to what would become his lasting legacy at Everglades Boats.

Bob went on to build small parts and windshields for select industry partners before starting Everglades to build high end powerboats. Over the last 15 years, Everglades grew into the premier brands of offshore power boats ranging in size from 23 to 43’. Because of his vision and leadership, Everglades continues to build a full line of the best offshore fishing/family boats in the industry. Every boat that has come off the factory floor for the last 15 years, and every boat that will come off in the future, will be filled with Dougherty DNA, and will carry Bob’s legacy forever.

One of Bob’s favorite sayings was “Tight Lines,” a fishing term for good luck and good fortune. He lived his life as if a fish were always on the line, ready for the next challenge, with a can-do attitude that never quit. Bob Dougherty will be missed.