A Billfish Royal Slam is for most a lifetime sports fishing achievement. Julie Crispin, of Stuart, Florida, has set out to accomplish the International Game Fishing Association (IGFA) recognized feat of catching, tagging and releasing nine specific billfish species in 12 months. This has meant touring the world in search of Pacific blue marlin, black marlin, white marlin, striped marlin, Atlantic sailfish, Pacific sailfish, swordfish, spearfish and to the Caribbean for an Atlantic blue marlin.

“I was inspired by a friend, Scott Nichols, who was the first person on record to catch all nine required species of billfish twice in 12 months,” says Crispin. “I have always loved to fish and actually attained my first IGFA record in 1995 with a 34lb kingfish on light tackle.”

Crispin initially set out to accomplish the slam in a lifetime. Then in May, she and Nichols traveled to Hawaii to fish aboard the Luna, one of the boats on which Nichols had caught some of his slam fish. In one week, she was able to scratch a Pacific blue marlin, a spearfish and a black marlin, one-third of a Billfish Royal Slam, off her list. So, she decided to shorten the record attempt to 12 months. If Crispin accomplishes her goal, she will be the first female angler in history to do so.

In June, Crispin flew to Cuba to compete in the 66th Hemingway International Fishing Tournament. She and Nichols spent several days afterwards fishing the waters off the island’s north coast as well as taking a week to explore ashore. While she found the trip to be an amazing adventure, it didn’t further her record attempt as Crispin didn’t catch any billfish.

Her luck changed in July when she reeled in an Atlantic sailfish off West Palm Beach, Florida.

“It was the search for an Atlantic blue marlin that brought me to St. Thomas. Scott had fished on the Marlin Prince with Capt. Eddie Morrison in the past, so we booked our trip with him. We fished two days, but I caught the first Atlantic blue within one hour of putting lines in the water. Fernando Silva was the mate and had the fish tagged and released in no time at all. We learned a lot from Fernando and even brought home some of his tackle rigs to try his techniques elsewhere.” 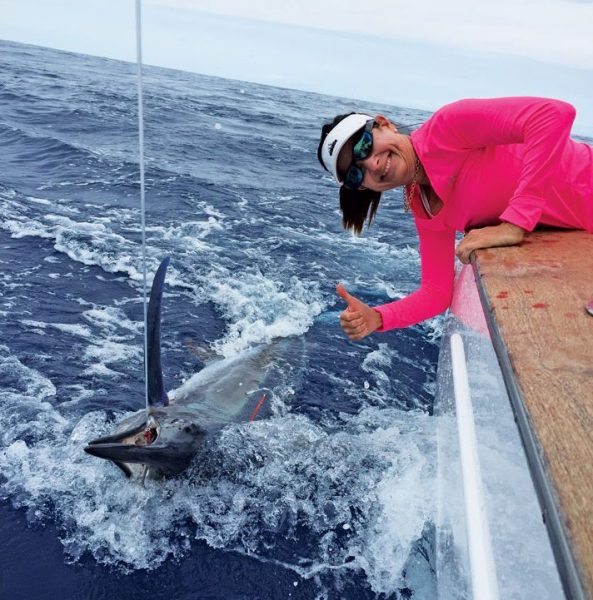 In September, Crispin went to Ocean City, Maryland, in pursuit of a white marlin. She angled off the Miss Annie and not only caught 14 whites in two days, but also a Hatchet marlin. This is a rare find and is not on the Billfish Royal Slam list, but Crispin definitely enjoyed the experience.

As of October, Crispin only had three billfish left to catch. She’ll be working on a swordfish off South Florida, followed by a trip to Cabo San Lucas to hopefully land a striped marlin and Pacific sailfish.

“If all goes according to plan that will complete my Billfish Royal Slam. But, they do call it fishing and not catching for a reason, so only time (and a stroke of good luck) will tell!” she says.