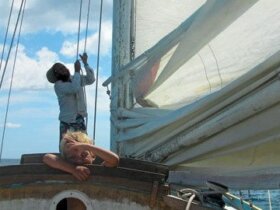 I hated for it to end.

Frankly, the only reason we just completed our third circumnavigation was so we could begin our fourth. We’re having waaaaaaaaay too much fun to stop.

To regularly sail long spans in deep ocean, preparation is everything. (Our longest passage this circ was 48 glorious days in the Pacific.)

Example: my wife, Carolyn, and I spent one solid year, both working from sun up to sun down, to prepare Ganesh for our third circ. After four years and about 20,000 miles, we decided to sail to Africa via the lower Indian Ocean. Knowing how rough that wind-swept, cross-swell area gets, we both worked another three months solid to get ready to tackle the passage from Singapore to Cocos Keeling.

What’s my definition of rough?

When a gale wind almost dies in the trough—that’s how you know the seas are truly big.

We had good weather information approaching South Africa via the SammNet (ZS1SAM) on ham radio, and thus hove-to just before the Agulhas current as a major gale went by—then successfully made the dash to Durban in South Africa. Not everyone was so lucky. While we were in Durban, the next gale dismasted a 48ft ketch, ripped the whole cabin top off a brand new cattlemaran, and broke a crewmember’s arm on a 42ft Beneteau.

South Africa is the only place I’ve ever heard a marine weather report mention ‘phenomenal’ seas—waves over 60ft in height.

However, our 38 nonstop days between Africa and the Caribbean were generally light and rolly. We never once, not even for a second, were on port tack. We went almost 6,000 miles on starboard—damn, that’s an amazing feeling for a former yacht racer who once tacked every few minutes.

Actually, the passage can be divided into two parts: 1) to the equator, and 2) from the equator to the Caribbean.

The problem with the first part isn’t the generally light wind but rather the massive swell. Old sailing ships used to fear this passage greatly, as they could roll their sticks (masts) out in the gentle winds and mountainous swells.

Our solution was to fly far more sail up high (at the masthead) than normal to cut down the roll. Thus we used our mizzen staysail, our huge fully battened mizzen, our large-roached mainsail, and our asymmetrical chute far more often than usual.

The whole idea here is to steady the boat via sails aloft so she doesn’t roll the wind out of all her sails and gradually lose forward speed as she hobbyhorses and wallows.

This is seldom a problem in the Indian Ocean or the windy Caribbean, but it is running downwind in six knots apparent and huge swells coming up from Cape Horn.

Different oceans require different tactics—that’s part of the joy of circumnavigating, learning how to cope with them all.

The latest techie thing for us circumnavigators is our ability to hitch-a-ride on ocean currents. We resisted, and stayed with the traditional square-rigged route.

At first, our friends who followed the current reported amazing speeds—until they got trapped along the Brazilian coast and hit with all sorts of adverse conditions as we romped to the Trades.

… score one for the old salts.

The big obstacle is, of course, the ITCZ (Intertropical Convergence Zone). Off the coast of Brazil, it is four hundred miles wide and very violent. Many vessels there reported 50+ knot squalls amid the total calm. Where we transited the equator, at 32 degrees west, it was only 120 miles wide. Our worst gust was 32 knots. There was usually enough wind to sail and we only burned a day’s fuel during the whole 6,000-mile passage.

Once through, we close-reached in NNE to NE winds. These slowly built and clocked eastward with every mile. Soon we were roaring along with 28 knots on the beam and massive tradewind swells hand-grenading our starboard side.

Why didn’t we stop in St. Helena and Fernando de Noronha?

Well, we’ve already visited St. Helena on our first circumnavigation—and they’ve now priced themselves out of our market at $400 for a few days. Alas, this isn’t quite as bad as Noronha’s $130 per day per person rip-off.

While I’m a carefree sailor who loves to convey good news to my fellow cruisers—not all the news from our third circumnavigation is positive. Prices to clear-in are skyrocketing
everywhere. Example: on our first circ, we cleared into Tonga for four dollars—given to a jovial fat fellow with no shoes. By our second circ, the same fellow had shoes and charged us forty bucks to clear in. This time, on our third voyage, he had shoes, a government car, and an iPhone—and charged us $400! Same guy—and each time he gave us nothing for our money other than a receipt.

The craziest moment of our 38-day journey? That’s easy. We were attacked by birds off the coast of Brazil. They were evil maxi-poopers who deliberately aimed for our solar cells, our cockpit cushions, and open hatches. It was awful. They had diarrhea—fishy diarrhea—and remarkably accurate aim! Yeeck! It soon became a pitched battle. Carolyn and I would attempt to beat them off with brooms, boathooks, and whipping lines, but they’d just blink and land anyway.

At midnight, another wave of them attacked from a passing fishing vessel. Carolyn was asleep. I managed to silently clear the deck of them after a prolonged, broom-waving fight. This totally exhausted me. I retired to the aft cabin—which smelled peculiar. It was pitch black. There was no light—or, just faint moonlight via the aft ports from which I could see my black pillow was out of place on the settee. I grabbed it to fluff—and it came alive in my arms. It was an awful feeling in the dark—frantic, desperate flapping. I screamed, like a young girl! It was clawing at my bare chest. I knocked it away and slipped. I fell down. My head bounced off the cabin sole, which was slippery with sticky, odiferous bird shit. Damn it! The bird landed on the back of my baldhead—oh, the indignity! I started whimpering. Suddenly, the cabin light turned on and a naked Carolyn came to my rescue. “Don’t hurt the bird,” I screamed at first, then moments later, “Grab it!” and a few moments later still as I realized it had shit on my bunk, my pillows and the entire aft cabin, “… kill that mommyjammer!”

My strangest vision was of Carolyn flying through the air, starkers, with an out-stretched poopy bed sheet in her arms—to ultimately capture and release the beast.

… other than that, it was a fine, fine ocean passage.