Fog, mist, falling snow, heavy rainstorms, sandstorms or any other similar causes can make conditions that hamper visibility. Sound signals for vessels in restricted visibility, whether underway, at anchor or aground, day or night, are the subject of Rule 35 (COLREGS). The bell and gong are added into the mix of whistle sounds used as options for restricted visibility signals. Rule 35 is fairly complex, and it is advised to have a highlighter in hand while reading through it.

The Rules of the Road state when underway ‘vessels shall sound at intervals of not more than two minutes’ the prescribed sound signal.

Why a two minute rule? A requirement for all vessels is to maintain a proper look-out by sight and hearing. In restricted visibility, the two minutes allows the look-out to listen for sound signals from other vessels groping their way through the fog. COLREGS lists the following sound signals for vessels underway: 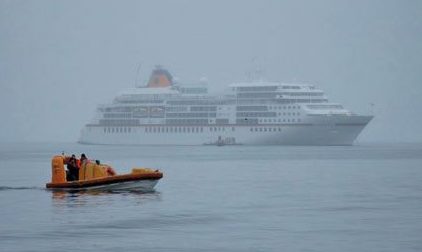 For these large yachts and ships, the bell is rapidly sounded from the foredeck, and immediately followed by the gong sounded rapidly from the afterdeck, both for about five seconds.

There are two classes of working vessels that do not use the bell and gong signals while at anchor.

Commercial fishing boats that are fishing while at anchor, and vessels restricted in their ability to maneuver that are carrying out their work while at anchor must use the encumbered vessel sound signal of one prolonged and two short blasts.

To further finesse Rule 35, The International Regulations for Preventing Collisions at Sea (IRPCS), doesn’t oblige the bell signals to be used at anchor and when aground for vessels 12m (39ft) or more, but less than 20m (65.6ft) in length. Instead, she shall make some other efficient sound signal at intervals of not more than two minutes.

Vessels less than 12m LOA are NOT required to use any of the sound signals required for vessels in restricted visibility. They also can make some other efficient sound signal at intervals of not more than two minutes. 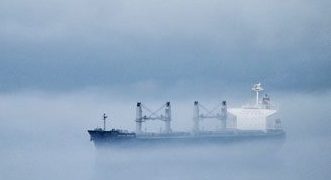 With the large number of sound signals available for use in restricted visibility, remembering all the possibilities can be difficult. Trying to quickly look up a sound signal heard in the fog by turning to Rule 35 in COLREGS can be a bit of a challenge.

A good alternative is to use one of the many laminated visual shorthand versions of COLREGS sold at ship chandleries.

Here’s the link to reference the Related, Rule 34 describing maneuvering and warning for powered vessels underweigh in international waters