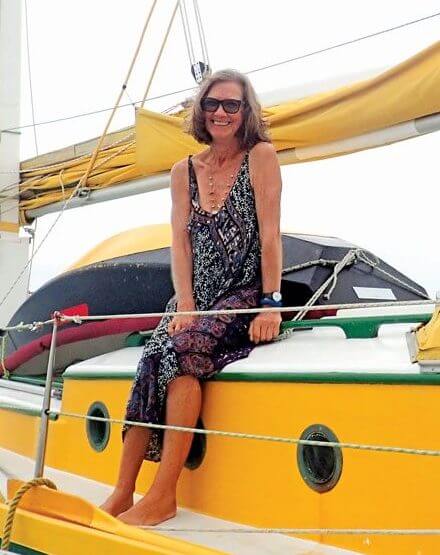 Sometimes unexpected pleasures arise out of the blue (pun apology). A message came that a cruising lady, Shirley Carter, was passing through the Virgin Islands, a lady friend from 25 years ago, from another continent, a lifetime ago. We had met and become friends in Hout Bay, South Africa. I was completing my steel cutter, Starry Night 2 and she, with friend Rick, had just bought a Tom Colvin designed junk-rigged steel 40ft Gazelle. We spent many happy evenings together talking cruising.

Forward to today and that same lady is anchored off the BVI’s Marina Cay, in a little yellow 25ft junk rigged Vertue, Speedwell of Hong Kong. We bounced up and down in 4ft waves and 25-kt winds as she related her story.

“After you sailed away from South Africa in 1991 I thought we would soon be behind you but for several reasons my partner just couldn’t cut the umbilical cord. It wasn’t until 2002 that I finally saw my cruising dream come true. I bought the old and rundown Speedwell in Saldanha Bay in 1998 and after a serious refit finally set off across the Atlantic … and into gale force conditions. My good friend, legendary sailor Pete Hill, who had departed South Africa at the same time was in St Helena, my first stop, and he helped me reorganize and dry out. I continued on to Jacare on Brazil’s east coast. I knew that something had to be done about all the serious leaks – I was fed up with all the pumping; the boards making up the cabin sole seemed to be floating most of the time.

“I secured my little boat in Jacare and joined Pete on his junk rigged catamaran, China Moon, for a great adventure to Tierra de Fuego. Eight months later I was back with a new engine (purchased in Buenos Aires and transported on Hill’s catamaran). After installing it in Brazil I set off for the Caribbean but again the leaking made me realize I had to do something. In Chaguaramas, Trinidad, I stripped off all the paint, reamed and filled the seams with epoxy and sheathed the entire hull to a thickness of over a quarter of an inch. Then, to the amazement of all the ‘old salts’, I decided to change the rig to junk; it had so impressed me in the South Atlantic. By this time my friend Pete Hill was back in South Africa and he agreed to make a mast for me and bring it to Trinidad on his catamaran and help me install it. The mast was installed with a sturdy tabernacle on the keel, reinforced with laminated knees. Then, I set about making the sail with yellow PVC cloth.” 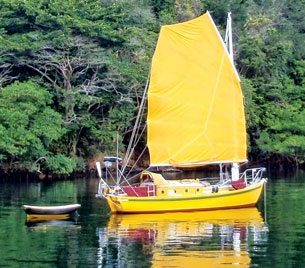 It should be noted that Speedwell’s refurbishment was/is all about keeping things simple. Plumbing was eliminated and through hulls sealed. A gimballed one burner primus is used for cooking and hot drinks. There’s no refrigeration. “That cold beer when I get ashore tastes so much better when you haven’t had one for a while,” says Shirley. The dinghy is a lightweight rowing shell, easy to stow on deck. Navionics on a tablet is used for navigation and a small shortwave radio receiver picks up weather reports with an app that is able to transpose them onto the tablet’s screen. She is full of praise for her Navik wind vane.

Shirley’s sailing adventures continue. She has voyaged extensively throughout the Caribbean, Brazil, Argentina, the US east coast, Bermuda, the Azores and Central America. Her plans are to head south out of the hurricane belt and to explore the coast of Columbia, Panama’s San Blas Islands and eventually into the Pacific. She’s been cruising, mostly single-handed, for 15 years. Now, approaching her 70th year, she has no plans of slowing down. “My cruising years have been the happiest times of my life.”

If you see ‘The little Yellow Boat’ make sure to give Shirley a wave.

Julian_Putley
Julian Putley is the author of ‘The Drinking Man’s Guide to the BVI’, ‘Sunfun Calypso’, and ‘Sunfun Gospel’.
RELATED ARTICLES
Cruise