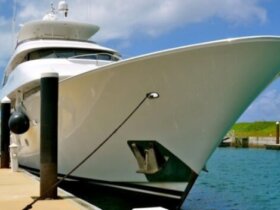 One of the most common questions from tourists to the Caribbean, especially from boaters, is: “Are there any sharks in these waters?” It seems that the fictional film ‘Jaws’ from the mid 70s is still on everyone’s mind. Personally, I refused to watch such a misleading and sensational story that turned thousands away from the pleasures of seaside fun.

Statistics show that you’re more likely to be struck by lightning than to suffer a shark attack. Every year up to 75 million sharks are killed by humans as opposed to about five persons killed by sharks. Staggering, isn’t it? And the main cause of such egregious slaughter is ‘finning’, the slicing off of shark fins for lucrative Oriental markets while simultaneously dumping the shark back into the sea to die.

For many, sharks are seen as the ogres of the sea; predatory monsters, the killing of which is doing the world a favor, but nothing could be further from the truth. Sharks play an important role in maintaining the function and balance of the marine ecosystem. One example is that the decline in large sharks off North Carolina caused a huge increase in the cownose ray population (a shark food source), which eat scallops, clams and oysters. In coral reef ecosystems, corals depend on herbivorous fish like the parrot fish to eat algae and thus promote the growth of new corals. When sharks are removed from the ecosystem large fish, which feed on the herbivores, increase, new coral growth is stymied and the reef is threatened.

Sharks are very susceptible to over fishing because of their life cycles; slow growth, late maturation and few offspring. The IUCN (International Union for Conservation of Nature) determined the status of 21 pelagic shark and ray species commonly caught in high seas fisheries. Sixteen of the 21 species were considered threatened or near threatened with extinction. Those common to the Caribbean include the manta ray, thresher shark, short fin and long fin mako shark and the hammerhead. If shark decimation is not curtailed now the world’s oceanic ecosystem and coral reefs will continue to suffer greatly.

Shark ‘finning’ is the most devastating form of shark slaughter and probably would have been banned years ago except for the public’s perception of the shark as being a dangerous and unpredictable predator. It is also extremely lucrative; shark fins can sell for as much as US$700 per kilo and a bowl of shark fin soup can sell for $100. As we have seen sharks are really disinterested in humans as a food. The other problem is that sharks are a serious bycatch issue in commercial long-line fishing often making up a quarter of the catch. Although some sharks caught as bycatch can be retained and landed for sale, often they are thrown overboard either dead or seriously injured. In short, sharks are threatened.

What can be done: Shark fin soup, as part of Chinese culture, is purported to enhance appetite, rejuvenate, restore vital energy, enhance sexual potency and improve skin quality. All of these claims have been found to be false and should be dumped into the dustbin of myth along with rhinoceros horn. In fact this tasteless soup is more likely to be dangerous to your health due to high levels of mercury. The myth needs to be exposed in a big way.

A representative of the PEW environment group was recently in the British Virgin Islands (BVI) to enlighten leaders on the plight of sharks worldwide. During a Caribbean summit of political and business leaders on Necker Island, Deputy Premier Dr. Kedrick Pickering announced government’s intention to protect sharks and rays in the territory. This is crucial because although sharks are only caught as bycatch at present who knows when international shark finners will appear on the horizon. Legislation is needed now. Kate Brunn, Founder of Reef Guardians BVI and part owner of UBS Dive Centre has been doing a stalwart job of protecting the reefs from the invasive lionfish. She will now act as spokesperson on shark protection initiatives in the BVI. Ms Brunn is interested in exploring the possibility of shark tourism as well. In the Bahamas shark diving generates millions in revenue every year, according to PEW.

Cashing in on watching these amazing creatures as well as protecting them from ruthless fishers would seem to be a win/win situation. The balance of our oceanic ecosystem needs to be protected.