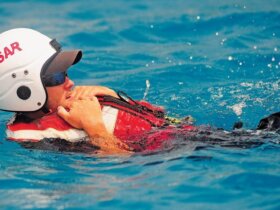 Situated in the Caribbean on the island of Hispaniola, and bordered by the Dominican Republic, Haiti is the poorest country in the Western Hemisphere. It has endured natural disasters, unstable governments, poor living conditions and human tragedy. “Fishing is one of the few vocations available in the coastal, rural communities,” said Michael Carcaise, who as a college student witnessed the hardships facing Haitian fishermen and became determined to help.

Fuel is expensive and expertise in engine repair is lacking, he learned, so fishing under sail makes sense. Sail power allows fishermen to extend their fishing areas beyond the shore into the currents that carry larger and more diverse fish. However, although the men have the skills to patch or remake a sail, no one in Haiti makes sails.

Since 2006, Carcaise and his college friend Michael Lass have operated Sails For Sustenance, their project to collect, sort and send sails to Haitian fishermen. Research affirmed that donated sails would not undercut or replace any existing business there, which would disrupt their economy. Now, instead of using flour sacks and discarded plastic sheeting, more and more Haitians set out to sea under recycled canvas.

Based in Miami, Florida, the non-profit, 501(c)(3) organization, has collected more than 400 donated sails from youth programs, high school or college teams, sailing clubs, and individuals across the U.S. Loft companies such as North Sail, Haarstick Sailmakers in N.Y, and Bremen Sails in Florida, collect sails for SFS. Even cruising sails and high tech, laminated racing sails are used, although they are hard to cut for resizing. “We’ve seen it all, we’ve used it all, we’ve sent it all, but the best is Dacron,” says Carcaise. The better the materials, the better they last, the more efficient they are on the water, and the less time is spent in patching. “However, they’ll make use of everything, and in any condition.”

Each donated sail is inspected, its information documented as to materials, type of boat and size. Battens, the stiff sticks that give the sail shape, are removed. The sails are flaked, rolled to a standard size, numbered, bagged, and put into inventory until the next shipment. When they arrive on numbered pallets for designated villages, sometimes there are as many as 100 fishermen in the village waiting, hoping for sails.

SFS relies on the religious organization, Food For The Poor (FFTP), to ship the sails, while other 501(c)(3) nonprofit organizations such as Fondation Paradis des Indiens, Hope for Haiti, or the Haitian Health Foundation distribute the sails to fishermen waiting in line. “There are plenty of sails in America, and there are plenty of demands for sails in Haiti, but it’s moving stuff in and out of the country that’s very difficult- that’s our limiting factor,” Carcaise states.

Food For the Poor fills unused container space with the sails, ships them by sea freight, gets them through customs and holds them securely in their Port au Prince warehouse. “We don’t pay for shipping, so we couldn’t possibly do it without them. If someone couldn’t donate a sail but wanted to donate money to them, it indirectly helps us to get sails down there,” said Carcaise. SFS generally sends four or five shipments per year, with 3-5 pallets of sails, holding about 45 sails, for about 45 boats. They’ve also sent lines, jib lines and anchors.

Haitian fishermen in the villages of Agricots, Grand Sable, Testas, Bon Bon, and Dame Marie have received the sails from SFS. Carcaise says the fishermen “will cut the sails to fit their rig.” Haitian fishing boats are wood, about 20’ long, and have shorter masts and longer booms, so “the masts have more sail area over the side of the boat,” he says. “Sometimes two sails work on one boat, other times one sail will be cut to work on two different boats.

“What’s important is the people, the resilience of the people. There are a lot of structural problems [in Haiti]. I’m most impressed with the resilience and ingenuity of the people and I think I was struck by that at first, as well. There is a reason to hope, even though they seem to have had a lot of bad luck for the past 100 years. The story is about the fishermen, not about here in Miami,” said Michael Carcaise. In Haiti, your recycled sail makes a huge impact.”

Since 1985, Food For The Poor, headquartered in Florida, works in 17 countries across the Caribbean and Latin America. They are instrumental in the Haitian fishing economy, providing education and fishing gear: www.foodforthepoor.org, (800) 427-9104, 6401.

Helen Aitken is a writer and photographer from eastern N.C. who loves classic wooden boats, “backyard” boat makers and coastal areas. She contributes regularly to All At Sea Southeast magazine. Visit her website at www.helenaitken.com.