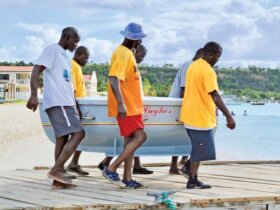 His Last Sail: In Honor of Mr. Albert Hughes

This apology and announcement goes out to cruisers in St. Thomas this winter. If you see a blond woman, rowing a red inflatable dingy, assume she is exercising. It’ll save a lot of time and help me keep up my heart rate.

We don’t have a kayak on board, though it’s on the list. When we purchased a new, hard-bottom dinghy last year, I discovered that it actually rows very well. Since I’m working on getting in shape, I’ve added rowing to my weekly exercise program. It’s fun; provides an excellent workout for my upper body and abs, and you can’t beat the view. Unfortunately, it’s also unusual. Very unusual.

During this season’s first row from the Water Island Honeymoon Beach anchorage, five people tried to rescue me. There is no hand sign that will stop them from steaming up to the dinghy to see whether I want help. If I wave my hands over my head, forming an X, it can be taken as ‘Help!’ as well as ‘No, don’t come over’. An upraised thumb or the OK symbol is too small to see until the rescuers are close and they can also be interpreted as ‘Great, thanks for the help’. I’ve tried bending my arms at the elbows and moving them back and forth at my sides as if I were running. In two seasons of rowing, one woman understood I meant ‘Exercising’. She still stopped by to make sure I was OK.

During the most recent episode, I first headed south to the neighboring bay and then turned northeast, with the red buoy as my goal. Shortly after I made my turn, Kirk Benefiel from S/V Ainulindalë stopped by to make sure I was safe. Kirk and his wife Donna are friends, and as soon as Donna had noticed me rowing, Kirk lowered their dinghy to offer a tow. I smiled and told him I was rowing on purpose for exercise, and he laughed and said, “I figured there was a 50/50 chance of that,” cheerfully returning to his boat and morning coffee.

A number of folks live on Water Island and work on ‘mainland’ St. Thomas. Some travel ashore in their own dinghy, others ride the small ferry from the dock inside of the red buoy. In addition, cruising sailors take their dinghies ashore to Crown Bay Marina for shopping, sightseeing and laundry. Between meeting with Kirk and reaching the red buoy, I watched the birds, waved to cruise ship passengers, and declined help from kind people in three different dinghies. As I reached the buoy, I deftly steered my way around it for the turn back to my hot morning beverage, when two people showed up in a Boston Whaler. “You OK?” they asked breathlessly.

I smiled, nodded, and said, “Yes, thank-you. I’m just exercising. Sorry to take you out of your way.” They smiled and assured me it was no problem. Feeling virtuous, yet vaguely guilty, I returned to La Luna.

Later that week, EW and I took the M/V Lunah Landah over to the Water Island dinghy dock so we could take a three-mile walk. When we returned to the dock, we met the young couple who had hastened to save me at the buoy. “You’re the woman who was rowing,” they said.

“Guilty,” I laughed, “sorry about that.”

He assured me that it was no problem, but that I should have heard what the ferry passengers had been saying because they were really worried. He told me that he’d tried to rescue me because one of the folks waiting on the dock had exclaimed, “She’s going for the buoy. She’s going to hang on to it!”

I could only shake my head and laugh.

I’ll keep on rowing for exercise. I have life jackets and a whistle on board if I get into difficulties. There’s also a motor hanging off the back. Anyone got any ideas how I can let folks know that I’m rowing my boat on purpose?

Now sailing the Caribbean, Barbara Hart lived aboard with her husband year-round in Maine for eight years. She has an active blog: www.HartsAtSea.com, sharing what she’s learned about living aboard, cruising, and staying married.