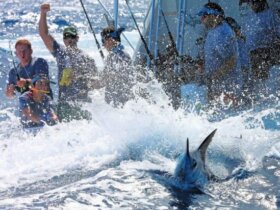 Fishing aboard the 44′ Custom Sportfisherman, Bluefin II, helmed by his father, Capt. Don Mertens, Ryan Mertens says, "We headed south and we were fishing about three hours when we saw a few frigate birds. That’s when we got the big one."

The winning fish was just over 17 pounds shy of the over 55-pound criteria to win the tournament’s ultimate prize – $25,000 in cash.

St. Thomas’ Dr. Edward Saunders, fishing aboard Irving’s Son, earned both the Second and Third Best Angler awards with catches of a 36.05-pound and 32.52-pound dolphin.

The Best Boat award for greatest number of dolphin caught by count came to a tie between St. Croix’s C-Hunter and St. Thomas’ Mixed Bag, both with 6 dolphin. However, C-Hunter, a 55-foot Hatteras owned and captained by Festus ‘Fes’ Pemberton, won the Best Boat title and pocketed the $1000 cash prize based on total length of fish caught. C-Hunter’s 6 dolphin collectively measured 243.50 inches while Mixed Bag’s catch measured in at 241.73 inches.

C-Hunter angler, Paul Stewart, says, "We headed north to C-FAD (Fish Attracting Device) about 18 miles north of St. Croix and there was nothing."

Skunked at the FAD, Pemberton turned C-Hunter around and headed back towards St. Croix trolling all the way. Twelve miles out, small birds and a floater in the water made for an ‘X’ marks the spot.

"Boom, all the lines went off at once," says Stewart. "We caught about 40 fish, both wahoo and dolphin. It was just mayhem until we finally ran out of bait."

Baitless, C-Hunter left the fishing gold mine and were headed to the weigh-in in St. Thomas when they saw some local fisherman and passed on the tip about the good fishing hole.

The next morning, Stewart says, "They met us on the dock with a 65-pound bull dolphin they had caught in the same spot were we were fishing. That would have been our $25,000 fish if we had caught it!"

Tournament director, Jim Jamison, who himself fished aboard his boat, Bare Down, says, "The fishing was good and there were several dolphin caught. Many boats also caught marlin, both blue and white. Everyone had a really good time. That’s what it’s all about."

The fleet of 14 participating boats and 64 anglers collectively caught 27 dolphin for a total of 590.8-pounds. Many boats donated one of their catch to the host VIGFC, where this was the featured entrée at the Awards Dinner held April 12.

The VIGFC’s next event is the 47th Annual July Open Billfish Tournament, set for July 23, 24 and 25. For more information, visit www.vigfc.com