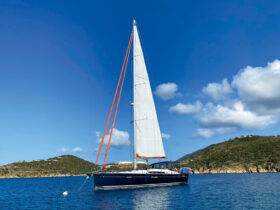 She didn’t grow up yachting. Yet today, Antigua native Sylvia Weston is one of the most respected brokers in the crewed charter business. For one, Weston was educated in the industry by one of its pioneers: the Nicholson family. Secondly, and most importantly, in her 42-year career she’s toured destinations, met crews and evaluated vessels around the globe and this has imbued her with a wealth of yachting knowledge. It’s also given Weston a special knack for matching guests with the right boat and crews whether they be movie stars or mere mortals.

“When I graduated from the Princess Margaret School, I needed a job and interviewed at Nicholson Yacht Charters in St. John’s where Julie, Rodney and the Commander worked,” says Weston. “They hired me as a stenographer. Julie would dictate and I’d listen, write in shorthand and transcribe. It wasn’t long before I could walk you through every detail of a yacht before I’d seen it.”

Soon Weston was on those yachts and out sailing as part of her new job. There’d be day sails from St. John’s to Curtin Bluff and overnight sails from English Harbor to Green Island. Barbeques, bonfires and ballads played by Joel Byerly on guitar aboard his Lord Jim, anchored nearby, provided the entertainment. All the while, Weston got a feel for different styles of yachts, how the crew operated and the social scene that made charters so much fun. 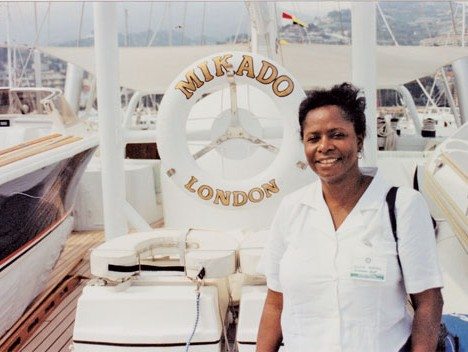 “There were many classic yachts back then like Sparkman & Stephens and Hinckleys,” Weston recalls. “There was always elegance too. Chef’s prepared fresh foods, crews set elegant tables and dinners were served by candlelight. After all, service is the motto of the yachting industry. As for water toys, swimming was the natural sport as well as snorkeling and fishing. Electronics were not what we have today. I remember having a Telex in the St. John office. If we needed to contact a yacht, we’d get on the radio in the Commanders office in St. John, call to the English Harbor office and it would be broadcast there to the specific yacht.”

Weston moved to the U.S. in the 1970s where she set up the Cambridge, Massachusetts, brokerage office of Nicholson Yacht Charters around the same time Julie Nicholson established an office in the family’s longtime favorite summer destination in Blue Hill, Maine. Over the years she has had many fun experiences.

“One year, when the boat show was at the St. James Club, I remember going on a yacht and out came a friend of the owner. It was actress Debbie Reynolds,” says Weston. “Another time, after we had a yacht fully provisioned for a European client, the captain told me they were ashore in Tortola and the client wanted to know who owned the chickens in the street. Seems he was accustomed to very fresh chicken.”

Learning about people of different cultures and the close-knit nature of the yachting community is what Weston says she enjoys best about being a charter broker. She’s traveled to France, Turkey, Italy, Greece, Phuket and Tahiti and made many friends along the way. One year in San Remo, after the Monaco Yacht Show, she emerged from her hotel to be greeted by a friendly face passing by: a captain she had met in Antigua.

“I love interacting with the people for whom I’m planning a charter. Getting to know what they like, their aspirations and bringing their expectations to a reality. Putting two sets of people together who don’t know each other, clients and crews, creates a bond. To be part of that, one of the persons involved when that goodness happens, is marvelous,” she says.

Weston’s advice to those who would like to become charter brokers is to intern or to work first as crew.

“I learned from my teachers, Julie, Rodney and the Commander,’ says Weston. “But you must remember; to learn you need to put forth the effort in observing and absorbing the information from the people around you.”