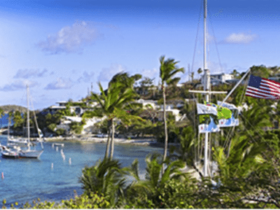 Some sailors are so passionate about the sport that they qualify and compete in the Olympics. Some mountain climbers are so enamored of tall snow-covered peaks that they climb the likes of Kilimanjaro. St. Thomas’ Jean Braure has done both. In fact, he calls himself by the name of his 2011-released book, ‘The Sailor Who Climbs Mountains’.

Born in Paris, Braure learned how to sail dinghies during summer vacations on the French Riviera. At age 19, he enlisted in the French Navy and sailed around the world. Three years later, he was honorably discharged, traveled to London, enrolled in a school to learn the English language and met his wife, Choupette. Braure convinced his wife to visit her native Haiti and after a few years the two moved to Miami. Here, the Frenchman worked as a maître d’, a position that led him to the Sheraton in Puerto Rico and ultimately managing the former Red Rooster Restaurant in St. Thomas. It wasn’t long before Braure got his captain’s license, bought a Pearson 26, named it Mumu and started a daysail business from Charlotte Amalie Harbor to Buck Island.

“I am a competitive person and I like to challenge myself,” says Braure. “Dick Johnson pushed me to race. I ended up winning my class in the first two Rolex regattas, first on the Pearson and then on a Morgan 27 I bought and called Mumu Tu. Those were the days. Dick Avery, Rudy Thompson, John Foster, Peter Holmberg—we were all racing.”

Braure loved racing sailboats so much that he and crew Kirk Grybowski qualified for the 1984 Summer Olympics in Long Beach, California, in the Soling. The two kept a boat in the U.S. and would trailer it to practice sites as well as competitions. In order to qualify, the two Virgin Islands’ sailors needed to place in the top ten in the U.S. Soling National Championships, held at the Galveston Yacht Club in Texas.

“I noticed that the best Soling sailor in the U.S., Buddy Melges, hosted a comfortable breakfast at the club while we were out fighting the flogging sails and mean waves. There we went, showing those heavyweights the quality of our sailing. As it turned out, we were among the sea dummies trying to hold the boat down and struggling to steer the craft. Within 30 minutes, we lost our mast overboard and had to wait to be rescued. The next morning, Buddy reached the start line fresh with a boat tuned to perfection. He eventually won the championship and we got a ninth to quality for the Olympics.”

Later, showing his love of speed, Braure competed at the 1988 and 1992 Summer Olympics in Seoul, Korea and Barcelona, Spain, in the Tornado. After 1992, Braure didn’t give up sailing but he did start flying to Europe each summer where he joined the French Alpine Club and started mountain climbing.

“Friends say I am gifted with ropes, which are essential to sailing and mountain climbing,” says Braure. “There are other similarities between the two sports. I have never gotten seasick or mountain sick. The weather conditions are very important, and preparation and training is foremost.”

Perhaps Braure’s most remarkable mountain-climbing feat was to attempt to summit Mount Kilimanjaro (19,340ft) four years ago at the age of 73. Ninety-five meters (311ft) from the top, with his breathing irregular and heart pounding, Braure made the most difficult decision that a mountaineer can make – to abandon the climb.

“I wanted to live and to enjoy life,” says Braure. “I am satisfied to have abandoned the climb, because where I stopped, Stella Point, is the second highest elevation in Africa.”

Today, Braure is still sailing and climbing. He raced his Freedom 40, Mumu Sunset, in the 2011 International Rolex Regatta, although he retired from charter just this year. This summer, he is climbing Pico de Orizaba, the highest mountain in Mexico and third highest mountain in North America at 18,491ft.

“You have to do things to challenge yourself in life,” Braure says. “If you stop doing this, you are finished.”