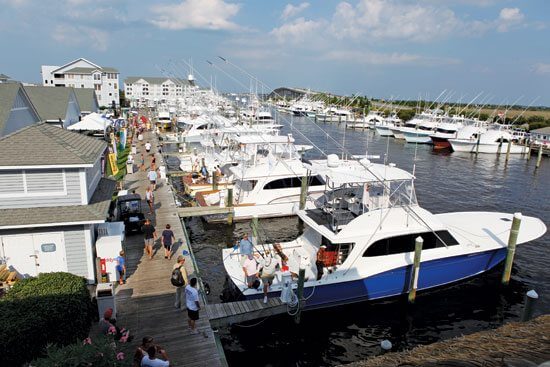 Manteo, N.C., brings to mind boat builders like Bayliss, Spencer and B&B. But a tradition of offshore fishing for blue marlin also exists at the Pirate’s Cove Marina. The 30th annual competition will decide which boat wins bragging rights – and a hefty check – by weighing-in the heaviest blue marlin during the Pirates Cove Billfish Tournament.

“On Sunday, Aug. 11, we hold a tournament just for our lady anglers,” said tournament director Jim Tobin. “With most of the sportfishing boats already in port, we will have a high rate of participation, since the ladies share a love for the bluewater.

“This is known ass the Alice Kelly event, and it raises funds to support the Outer Banks Cancer Support Group,” Tobin added. “This group was founded by Alice Kelly before her passing, helping patients fight cancer with proper treatment, even if they lack health insurance. The Pirates Cove event raises funds for charity too, and we are closing in on the $1 million figure donated to charities.”

The tourney allows anglers to choose three out of four days to fish between Aug. 13-16. Pirates Cove is one of the original tourneys in the N.C. Governor’s Cup Series, and one of eight series dates in 2013. In 2008 the Pirates Cove tourney saw the state record blue marlin caught by angler Trey Irvine and weighed in at 1,028 pounds. It is still the talk of the docks to this day.

Last year, 61 boats fished Pirates Cove for a purse that was right at $500K. “We expect the number of boats to increase in 2013, and our all-time high for participation was 127 boats,” Tobin said. “This is a release tourney for all billfish species except blue marlin, and our tournament rules stipulate that the fish has to weigh 400-pounds or better to qualify, and have a minimum length of 110 inches.”

One distinction of the Pirates Cove Marina is the 10,000-square foot enclosed pavilion that serves as the headquarters for each event of the week. Beginning with a Captain’s Meeting there will be a dinner and live entertainment each evening. The public may purchase tickets and join in the fun at the Bacardi Bar, or take part in the Release Marine fighting chair competition.

“We are proud to be a sponsor, and this fighting chair competition helps to get kids involved in the spirit of offshore fishing,” said Marian Tucker with Release Marine. “We also tend to see those who are young at heart wanting to battle it out with friends during this time of fellowship, after a day of competitive fishing.”

In addition to the marina, Pirates Cove includes a resort offering rental units for visiting anglers. Legal fishing hours each day 8:30 a.m.-3 p.m., and all anglers must be registered prior to fishing. Any fish caught by a non-registered angler will be disqualified.

Billfish that are released will be assigned points with 210 points for a blue marlin, and 70 points for a white marlin, sailfish or spearfish. A billfish release is achieved when the mate or member of the crew touches the leader and it is reported to a committee boat.