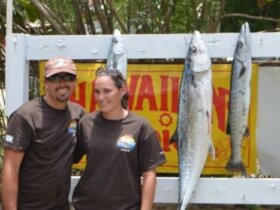 First-timers luck held fast for the team aboard Pescador during the first day of fishing in the 50th Anniversary July Open Billfish Tournament (JOBT), hosted by the Virgin Islands Game Fishing Club (VIGFC). Stephen Deckoff, the St. John, USVI-based owner/angler of the 60-foot Rybovich, and his son Stephen Jr., released a pair of blue marlin apiece to rocket Pescador to the top of the leaderboard with four releases total.

“We moved to the Virgin Islands two years ago, but this is the first time we’ve fished in a tournament down here,” says Deckoff, who is a longtime avid angler. “All the fish we released today were good size, in the 400- to 500-pound range. Fights ranged from 15 minutes to an hour.”

Deckoff released Pescador’s first marlin not long after the 8:30 a.m. lines in. Son Stephen followed with his first release mid-morning. Deckoff boosted his total to two releases by Noon. Then, with only one minute remaining until the 5 p.m. lines out, Stephen, hooked up and released the team’s fourth marlin.

Following in second place is the 82-foot Merritt, Reel Tight, based out of Hillsboro Inlet, Florida, and winner of the 2008 JOBT. Angler/mate, Robert ‘Fly’ Navarro, released two blue marlin. In addition, Navarro released his two blues first to put him in the Top Angler lead.

The smallest boat of the tournament, Silver Fox, a 40-foot center console, had a big day. Owner/angler Matthew Raffa and angler Colin Butler, both from St. Thomas, hooked up and successfully released a double-header that put Silver Fox in third.

Nine of the 11-boat tournament fleet released 12 blue marlin for the day. One of these was Team Free Spool, who was fishing aboard the 70-foot Tribute, Nemesis. You could say Team Free Spool, led by owner/angler Curt Richardson, had an electrifying experience while out fishing two days before the JOBT start. The 48-foot Buddy Davis was hit by lightning out on the North Drop in a ferocious thunder storm. The lightning bolt struck the port outrigger, traveled through and ‘fried’ some of the vessel’s electrical equipment. No one was hurt. Richardson and his team made it back to the dock unassisted, where their love of sports fishing and determination to compete led them to charter Nemesis.

Fishing continues Saturday with lines in the water at 8:30 a.m. and out at 5 p.m. On Sunday, the tournament’s third and final day, lines out is at 4 p.m. The public is invited to greet the fleet as the boats come back to the dock around sunset. The number of flags flying on the outriggers indicates how many billfish the boat’s anglers caught and released for the day.

IGFA trained Observers, all members of the IGFTO (International Game Fish Tournament Observers), ride aboard each boat throughout the tournament to verify the releases.

Past winners of the prestigious Capt. Johnny Harms ‘Give Him Line’ Trophy read like a ‘Who’s Who’ of blue marlin sport fishing. Angler Elliot Fishman’s winning 845-pound catch in 1968 set an all-tackle world record. Only two anglers have reeled in this honor two times – the late Howard Crouse in 1965 and 1988, and Puerto Rico’s late legendary angler Ralph Christiansen in 1973 and 1984.