Petite Calivigny Yacht Club’s first Round Grenada Regatta, with layover in Tyrell Bay, Carriacou, was a resounding success, despite Hurricane Danny threatening up until the day before. Nine monohulls and three catamarans comprised a very respectable fleet for this new ‘off season’ event, with an interesting twist allowing racers to choose to round Grenada clockwise or anti-clockwise, resulting in much pre-race strategizing.

Le Phare Bleu was an ideal host venue for skippers briefing and final awards ceremony, providing discounted dockage and the Grenada start/finish line. On Saturday at 7am, 12 boats crossed the start line and, finding good breeze at the Le Phare Bleu outer buoy, four boats headed to the east and the rest of the fleet to the west. West-about boats quickly cleared Point Saline, but on the other side a big hole swallowed the leeward fleet, only spitting them out towards the end of the day. Despite this, many boats sailed the whole way and others only motored to get in before dark. 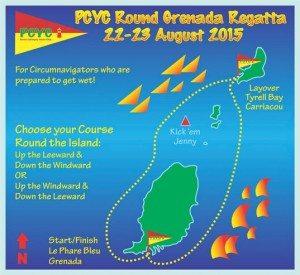 Meanwhile front runners on the windward side were having a great sail tacking up the south and east coast with Jeff Rose’s 48ft Swan Roxie just offshore and Robbie Yearwood’s J24, Island Waterworld Die Hard hugging the coast to avoid strong current. However, they were the only two that ‘got away’ and those behind them were victims of the dying wind. So Roxie crossed the line first in Carriacou, followed by Die Hard, which Roxie crew decided was like “an annoying mosquito that just won’t go away no matter what you do.”

In Tyrell Bay, racers were guided in by Piero Zipolion the race committee boat and given an extremely warm welcome at the Saturday night Layover party at Carriacou Marine by Trevor Stanislaus and his team who pulled out all the stops. Westerhall spirits and mellow music from Barracuda soon eased racing frustrations. The day’s top monohulls were Roxie, Die Hard and Apero in that order and catamarans were Sunshine and Whiskers. A special prize for the boat with the ‘least crew most legs’ went to Rod and Pattie Hall on Callaloo, who gamely sailed with dogs Frodo and Jake onboard.

On Sunday’s 9am downwind start line, boats becalmed the day before were ready to take their revenge with a quick blast down the eastern side. One possibly hungover crew took what must be the longest time in history to raise their bag, while on another boat the spinnaker and jockey pole, which had languished in a locker for ten years, were resurrected and soon the fleet was splitting up to race to the finish. Off the east side leaders changed places, as differing spinnaker strategies around offshore islands gave advantage. On the west side some opted to sail far offshore to avoid the dreaded hole, while those closer in had the doldrums for three hours, one being skipper Robbie Yearwood, who said with a rueful smile: “That’s when you really show your mettle.”

At the awards ceremony Commodore Rene Froehlich congratulated all participants. For the return leg, the Leopard 47, Sunshine, sailed single handedly by Ken Wolfel with spinnaker flying, was 1st catamaran with Wayne Da Costa’s Fontaine Pajot Venezia, Whiskers, not far behind. In the monohull fleet Champy Evans’s Elan 37 Julie Rule was 1st, redeeming the crew from the indignity of an upside down genoa hoist on day one. 2nd was Mike Bingley’s 38ft Beneteau First, Tulaichean II and 3rd was Frik Kotze’s Hunter 460, Desire.

There is something special about sailing offshore around an island, demanding a different set of racing skills, not only sail trim and boat handling, but also strategic planning and staying power. With this Round Grenada Regatta, Petite Calivigny Yacht Club has revived a rich tradition, started in Grenada by Don Street in 1969, luring sailors to take on the challenge of longer distance racing.

For more information about the PCYC and the Round Grenada Regatta, visit www.pcycgrenada.com