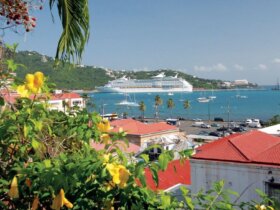 We consider it a good omen to be greeted by terns as we enter a new anchorage, so we are delighted to see a small group of Bridled Terns circling above our boat Arctic Tern as we pull into Cayo de Agua in Los Roques, Venezuela.

Terns are fast fliers and can be hard to identify, so I start by looking at the tail, the bill and leg color, general size and any distinctive markings. Bridled Terns have long wings and a deeply forked tail, black bill and legs and a distinctive black cap that extends down the back with a white chevron on the forehead. Their call is distinctive – a puppy like yelp tells me that these are Bridled Terns, not the very similar Sooty Tern which sounds a bit like a high pitched duck call. If you had both terns in hand you could see that the black cap in the Sooty Tern is smaller, but lacking a tern in the hand I make my identification by voice and later verify my determination with a good look at a tern defending a nest on the ground. Juveniles when fully feathered are similar in appearance to the adults except the crown has grayish brown streaks and the white chest has flecks of gray.

Bridled Terns are denizens of the tropical and sub tropical oceans worldwide. They nest on islands in the Atlantic, Indian and western Pacific Oceans. In the Caribbean, Bridled Terns can be found in small colonies on islands and cays, for example in the Tobago Cays in the Grenadines, and on islands in Los Roques and Las Aves, Venezuela. After breeding the adults and newly fledged young leave the breeding colonies in loose flocks or alone. Away from the breeding grounds these terns are entirely pelagic and are often associated with patches of sargasso algae or flotsam which they use for perching. This behavior explains why we seldom see Bridled Terns in our travels through the Caribbean except when they are nesting. Bridled Terns are not plunge divers like most terns; they are more often seen flying above the water hunting in the characteristic tern 'head down' position, then dipping to the surface for small fish such as squid and flying fish. They will also pick crustaceans, aquatic insects or mollusks from mats of sargasso weed.

As we walked around Cayo de Agua, Bridled Terns flew above us calling and diving at us. We were clearly too close to their nests, which were small depressions in sand surrounded by vegetation that give the nest a tiny amount of shade. In other locations nests may be in natural cavities amongst rocks or coral rubble. Bridled Terns breed from February through June in the Caribbean. They lay one egg and the chick hatches after 29 days and may take up to 55 days to take flight. The youngsters need a long fledging period because after they fledge they leave the nesting area and spend most of their time at sea until they are ready to breed.

Bridled Terns are not globally threatened because they are so widely dispersed, but can be locally threatened by mammalian predators, development on or near their nesting sites and egg collecting. Eggs are harvested for subsistence in the Bahamas and the West Indies, and eggs and chicks are harvested on some islands in the Pacific by local residents and coastal shipping crews.

Devi Sharp is a retired wildlife biologist and is exploring the birds of the Caribbean with her husband, Hunter, on their sailboat Arctic Tern.Chuck Shipley is a former professor of computer science and an avid amateur photographer. Chuck and his wife Barbara live aboard their trawler Tusen Takk II in the Caribbean.

There’s a new U.S. office in the Chesapeake Bay. Ing Kiland will head up this latest location as an associate broker.