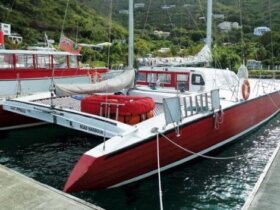 After a 12-year absence to sail twice around the world, Iâ€™m occasionally shocked by the changes on certain islands of the Lesser Antilles. I first arrived here aboard my ketch Carlotta in the 1970s. It is fair to say there have been some changes. But one little island has remained amazingly unchanged: Nevis.

It is still laidback. There was a clock here onceâ€”but it ran down and nobody had the energy to rewind it. â€œWhy bother wid it,â€ asked a West Indian friend of mine who had studied diligently at Ganja University, â€œwhen she will only want to be wound up again? No end, see? Why get involved? And what she foâ€™, anyway? To tell you dat you late? I already knows Iâ€™m late, me son! Why I need some fool clock to tell me so?â€

Yeah, they have some damn good ideas in Nevis. Not timely ones, true, but good ones.

Once, back in the 80s, I had my oars stolen from my dinghy on the beach by the main wharf. A local fisherman was mending a net nearby. I told him. He stood up slowly and looked sad.

Then he slowly, slowly strolled awayâ€”and returned with my re-claimed oars in an hour or so.

To me, thatâ€™s Nevis. Not perfect, but mostly so â€¦ and filled with good people who want it to be.

And, of course, it is easy to get on the good side of any Nevisian. Just say, â€œI go St. Kitts â€¦ and dat place filled with fools! Datâ€™s true, me son! Dem boys idiotsâ€”every last one of dem fellows is stupid!â€

Not much happens in Nevisâ€”but when it does, they never forget. Alexander Hamilton was born hereâ€”a big event in their mostly-mundane history. Thus, pretty much everything on the island is named Hamiltonâ€”except the main town â€œ â€¦â€™cause them teefs in Bermuda, dey stole it!â€ I was informed by one dockside lounger.

They like to lounge around in Nevis. They are good loungers and sitters and relaxers. Yes, the average Nevisian makes Buddha seem uptight. They are amazingly unfocused. â€˜Varying your routineâ€™ in Nevis is first sitting by the wharf, then by the cricket field, and finally dozing off on the benches outside Customs.

â€˜Multi-taskingâ€™ is sleeping and snoring at the same time.

Lord Nelson got married here. Thatâ€™s a biggy, too. He married a local gal named Francesâ€”who was hot-hot-hot, by all local accounts.

Most Nevisians know how to read (98%, one of the highest rates in the Western Hemisphere), and use that skill to peruse the local paper from Basseterre and say, â€œLordy, wat dem fools in Kitts doing now?â€

It is hot in Nevis, which makes you wonder what the guys who named her â€˜Our Lady of the Snowsâ€™ were smoking.

I sail there to visit with Chuck Norrisâ€”not the real Chuck Norris, but a handsomer guy who looks a little bit like him. He owns the three-masted schooner modestly named Star. We go back a long ways, 30 years plus. (Star is the only vessel to have carried the Nevis/St. Kitts flag around the world.)

His wife is named Irene. She is a â€˜trip and a halfâ€™ as we hippies used to say. Once in the early 80s, we delivered a giant Camper Nic down to the Virgin Islands from Newport, Virginia. Just before tying up to Yacht Haven (while all our friends looked down from the Bilge Bar), Irene mysteriously disappeared below.

Just as we were dockingâ€”and hundreds of eyes were upon usâ€”Irene strutted back up on deck in her hooker outfit (leather mini-skirt, pirate blouse, fishnet stockings, and f-me pumps) and began shouting at the top of her lungs, â€œI didnâ€™t know what depravity was, until I signed aboard this vessel! The skipper said, â€˜Two on, two off â€¦â€˜ and I thought that was the watches! They all kept telling me that any of the crew members would be happy to inject me with a cure for sea-sicknessâ€”not bloody likely! Actually, being a galley slave was the fun part of the job!â€

Oh, she is a firecracker, all right.

They have a house â€˜up the hillâ€™ (mountain, to me) which is called The Monkey Houseâ€”not because monkeys are always scampering around (they are) but because they constantly engage in monkey business.

To lure us there (okay, okay, they rent it out as well) Chuck Norris also constructed a separate dwelling called The Love Shack. It is the neatest place in the Lesser Antilles. My wife and I sailed to Nevis, dashed up the hill while discarding our clothes, flung ourselves into The Love Shackâ€”and only exited by ambulance, which arrived to cart me to the local clinic to have my â€˜bodily fluidsâ€™ replenished.

Roger Daltry, some famous Limey guy, hangs out at The Monkey House, too. (Chuck and Irene wonâ€™t tell me anything about him, despite my always pleading, â€œWho? Who?â€)

John Frith is another famous â€˜sailor dudeâ€™ who can be found panhandling (well, almost) at the better bars. His son Miska is one of my favorite Reggae musicians, and Heather Nova (his daughter) sings for her supper too (on Virgin Records). John used to own the Paul Johnson-designed Gaffer Moon in St. Barth, when Jimmy (yeah, the) was cadging beers at Le Select while penning the tentatively entitled Changes in Attitudes, Changes in Longitudes,â€ and yelling, â€œIâ€™ve almost got it right!â€ (Buffett just flew into Nevis recently, aboard his bullet-riddled seaplane.)

John Frith still has the Right Stuff. We met him strolling down the beach in his very thin pareo.

We attended a party thrown by Peterâ€”the guy who founded Outward Bound. Appropriately enough, he was going to be outward bound aboard his J/46 to Newport in a day or two.

Almost nobody has last names in Nevisâ€”it is considered a tad low class.

There were lots of ex-pats from Jolly Olâ€™ England thereâ€”acting suitably daffy. Many carried their G&Ts in 55-gallon cupsâ€”thereâ€™s no danger of scurvy in upper-class Nevis.

Oh, the Poms do love their eccentrics, eh?

One old duffer keep grabbing/squeezing the ladies from his wheelchair, and leering, â€œYou and me in the bushes, what do you say? Wouldnâ€™t that be grand?â€ (From the look on the womenâ€™s facesâ€”no, it would not be grand.)

â€œ â€¦ I was born in Trinidadâ€”which is where I learned to drink,â€ another tipsy tippler told me.

Yes, it was an odd groupâ€”but then again, they invited me, didnâ€™t they?

Horseback riding is one of the few transportation systems Nevis hasâ€”that is, perhaps, because of the relative lack-of-maintenance a horse requires. Regardless, local lads are always dashing up and down the beachâ€”chasing after young British girls who are falling off their mounts. (Many fall into their arms; lucky dem!)

Which brings us to the highlight of our visit; a lovely beach wedding between yet another two people without last names.

I enquired of the best man what his posh best friend (the groom) did for a living. â€œRock star!â€ I was informed. But another â€˜best friend from Jolly olâ€™ said, â€œâ€¦ writes jinglesâ€ and a third quipped, â€œ â€¦ computers, of course!â€ while the final-but-equally-vague answer was, â€œ â€¦ accounting, Iâ€™d guess!â€

Thatâ€™s a familiar theme in Nevisâ€”it is always impolite to ask what you want to know, donâ€™t you know?

So you never quite know if the fellow who tells you he â€˜drinks for a livingâ€™ is pulling your leg or not. (In this case, however, we did know â€¦ as he was passed out in the bushes within an hour of the first bottle of Tanqueray being uncorked.)

But Nevis is always a fun place to visit. I asked the bartender at the Hermitage (lovely little hideaway) if you had to dress for dinner.

He thought about it a long time. You could almost see the gears turning. Finally, he lit back up. He had the answer. â€œSome does,â€ he said, â€œbut you donâ€™t must!â€

(Fatty and Carolyn are currently in Sint Maarten and, Jah permitting, soaking their new Wauquiez 43 ketch in a pool of WD-40.)

Capâ€™n Fatty Goodlander has lived aboard for 52 of his 60 years, and has circumnavigated twice. He is the author of Chasing the Horizon and numerous other marine books; his latest, Buy, Outfit, and Sail is out now. Visit: fattygoodlander.com