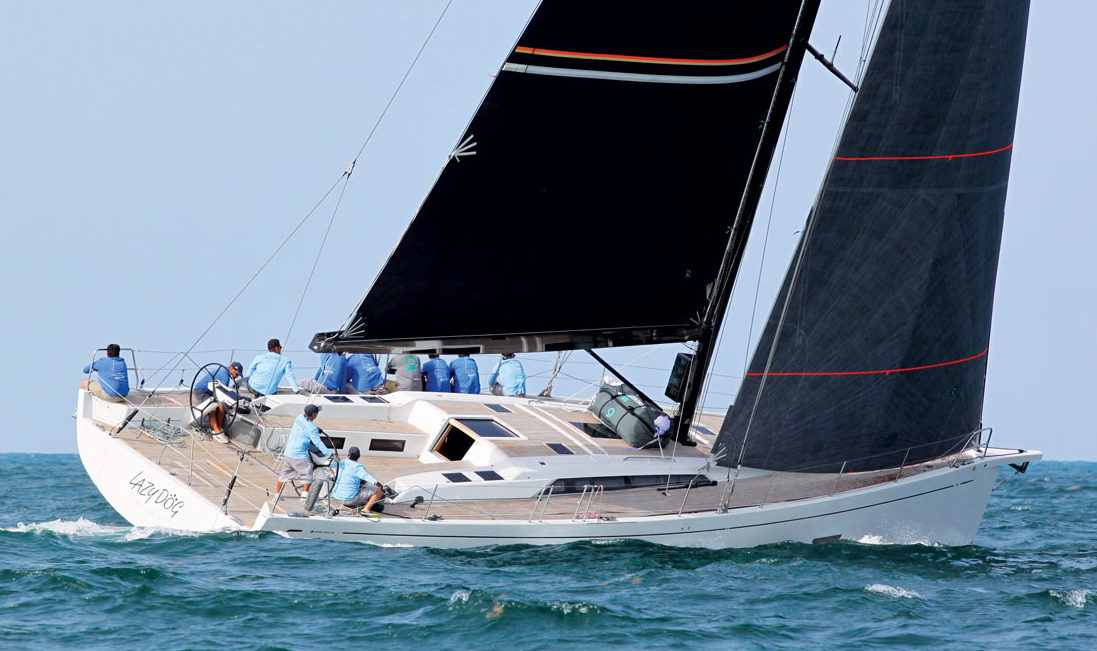 With the fiftieth Bonaire Regatta still fresh in mind Curaçao sailors gathered on the coastline of their home island for two local races for Sunfish dinghies and yachts.

The Sunfish competition, three short back-to-back races in the open sea on the first Sunday in November, turned out to be a family affair between Hans van der Gulik and his sons Tijn (17) and Bas (15) fiercely competing in the only offshore races for Sunfishes in Curaçao, which is named and sponsored by their grandfather Wim van der Gulik. While Tijn, who is striving to participate in the 2020 Olympics in Tokyo, easily took the first race, he lost the next race to Hans after some spectacular sailing at the second buoy. Tijn’s allegedly false start in the final race completed Hans’ triumph. Darius Berenos (15) took third place ahead of Bas van der Gulik. The races attracted a new generation of sailors along with the famous ‘old boys’ like Dolf van der Giessen who recently turned eighty.

The Piscadera race, sailed on the second Sunday in November, was won by the J-105 Vuja De. Remco van Dortmondt and his team ended seventh overall in the Bonaire Regatta, finished fourth in the first leg of the Piscadera race, but then used the strong and steady winds to advantage  leaving all competitors far behind in the final leg to sail to victory. Winning racing class as well as winning overall was a sweet moment for van Dortmondt and crew who are still tuning Vuja De, the boat they acquired last year.

The yachts in the racing and cruising class started in Spanish Waters and sailed two 9.5km courses along the south coast of the island passing the famous Handelskade of Willemstad and heading for the first finish in the tourist area of Piscadera Bay. Once past the Barbara Beach Canal most yachts flew their spinnakers on the long downwind run providing a nice view for more than 3000 passengers and crew on the cruise ship Norwegian Jade. Second place in racing class went to a team of Sea Scouts on La Dolce Vita, skippered by Mitchell Amasia, a former Sea Scout and ex-student who returned to his island and now offers his skills and knowledge to the Sea Scouts as well as to the local economy. Chamba II, also crewed by Sea Scouts and a frequent winner of the race, had to accept third place. In the cruising class Melody’s took the win, followed by Venus Callipyge and Holiday.

Both events boast an impressive history. The Sunfish sea races, originally called the ‘Zeestraaten Trophy’ started back in the ’70s, and were held twice a year before they petered out. In 1984, Wim van der Gulik won the reinstated trophy, and then Stephen Smeulders won it five times in a row before the regatta again disappeared from the Curaçao sailing calendar. In 2010, Wim van der Gulik brought the event back from the dead and lent his name to the race. Now the regatta counts as a qualifying race for the Sunfish South Americans 2018 in Cartagena, and the Worlds 2019 in Bonaire, which guarantees a large field of participants.

The Piscadera Race also goes back to the ’70s when it was called the COT race after the transshipment point of the sponsoring and organizing oil company Shell.

Through the years the race changed names many times, but the format, a morning and afternoon race interrupted by lunch remained the same and is now known as one of the most competitive and sociable sailing events in Curaçao.

Els Kroon is a Dutch former teacher who now lives and works as an award winning freelance photojournalist in Curaçao and Kissimmee, Florida.