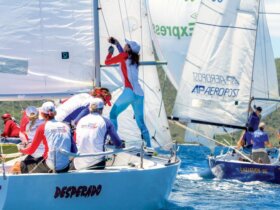 Anyone who has ever sailed on St. Croix or in the Caribbean, for that matter, has likely heard the name, Nick Castruccio. From avid racer to sailing instructor, regatta organizer, and liaison with the international sailing world, Nick has made a multifaceted contribution to the sport.

A California native, Nick grew up in the Los Angeles area during the 1930s and spent summers with his family at Laguna Beach. “One day, we went down and all the power boats had been rented,” he tells. “The man told us he’d rent us a sailboat instead. We said okay, and that was our first time under sail. Well, it was funny. My dad, sister and I got offshore and we found we didn’t know how to go to windward. After that, my sister started reading all the books about sailing that she could get her hands on. I got hooked on sailing, too.”

Nick later joined the Navy as a test pilot. He was stationed at the Naval Air Station on the Patuxent River in the Chesapeake. “While there, I bought a daysailer, a 16-foot Beetle boat with a centerboard. We named it Annick I, for my wife and I, Anne and Nick.”

During his Naval career, Nick says, “I spent a lot of time in the Caribbean. Later, my wife and I decided to buy land there for when I retired. We knew St. Thomas, but had never been to St. Croix. So, we visited. That was the early 60s and the island was just getting to be known then. We bought land in Cotton Valley and it was a good investment. Within two years, I was offered three times the purchase price for the property.”

It was 1970 when Nick was discharged from the Navy and was faced with a decision – move to St. Croix at that point or move back to California. “We decided to move to St. Croix and build a house. At that time, our two oldest children, Carolyn and Connie, had graduated from college. Our four youngest kids, Nicolette, Anthony, Susan, and Cece, moved with us and grew up on the island.”

Nick had brought Annick I to St. Croix and joined the St. Croix Yacht Club (SCYC) in 1971. “There was a big fleet of Sunfish and Snipes at the time. We also had the first Optimist dinghies in the Virgin Islands.”

A decade later, Nick’s kids were out of the nest and he and Anne decided to buy a bigger boat, a J-30 they named Annick II. “It had previously been raced by the designer, Rob Johnstone. It’s been a great boat.”

“The first few years,” Nick adds, “I raced with big guys aboard. But I love kids, and I taught sailing at the Club for many years. So I started taking the kids out as crew. Seems like I’ve had them all aboard over the years. Sailors like Jeff Fangman and Jack Bishop who’ve gone on to be good skippers in their own right.”

“One of my fondest memories is of finally beating Rudy Thompson in the 1982 Rolex. His Pearson Flyer and my boat were both rated the same, so we raced boat for boat.”

Annick II, with Nick driving, holds the monohull record for the fastest elapsed time in the Around St. Croix Race, 6 hours and 22 minutes.

Although Nick enjoys taking friends and family cruising to the British Virgin Islands, ambling along at a speed of five knots or under with an awning up in place of a spinnaker, there’s something about racing that he’s always enjoyed.

“It’s the competitiveness,” he says. “When you fly a plane, you have to be aerodynamically efficient. You either will stall or fly. Sailing is a challenge. You can be safe and put reefs in your sails and sail conservatively, but you won’t win any races. To do so, you have to take some calculated risks. You have to sail to the edge and push the envelope.”

Nick’s love of racing naturally led to his involvement with the Virgin Islands Sailing Association (VISA) and interest in race management.
“I got involved with VISA as the representative from St. Croix,” he says. “Then, I was elected vice president after the Sydney Olympics. It’s been fun to watch our young Virgin Islands sailors grow up and become better sailors, better people, and leaders.”

Castruccio’s foray into race management started in the 1980s. “I was asked by our Club to run the Caribbean Dinghy Championships,” he explains. “So, I talked to Lyn Reid (Rolex Regatta director) and went out with John Nichols during Rolex. After that, I got more and more interested in race management and regatta organization.”

At the time, the SCYC hosted a widely popular Memorial Day Regatta, which saw a fleet of boats from the surrounding islands race to St. Croix and back.

“The regatta died due to the time of year and competition from other sailing events going on at the same time, like Foxy’s Wooden Boat Regatta,” Nick says. “So, we had the idea to start a new event and got a sponsorship from Mumm’s champagne. At first, we held the regatta over Columbus Day weekend in October. That first year, 1992, we had 69 boats. The second year, we were afraid it would get too big, so we limited participation to 100 boats.”

Mother Nature intervened to put a damper on the Mumm’s Cup when 1995’s Hurricane Marilyn took out the SCYC’s dock, followed by a similar occurrence during Hurricane Lenny in 1999.

“It was after that, that we went with the St. Croix International Regatta,” Nick says, “and changed the date to President’s Day Weekend. This year, I wrote the board in advance and suggested moving the dates up a week and shortening the regatta to two days. It seemed to work just fine.”

Looking into the future, he comments, “I have great hope for sailing in the islands. I must admit, I’d like to see more local kids get into the sport. It seems they’re involved in so many other sports, and we’re surrounded by water. The sport is expensive, but there’s a great ability to meet and make friends all over the world.”

But the best part about sailing as a sport, says Nick, “is that you can do it at any age.”