The New Dockside Tropical Cafe: A Place for Everyone 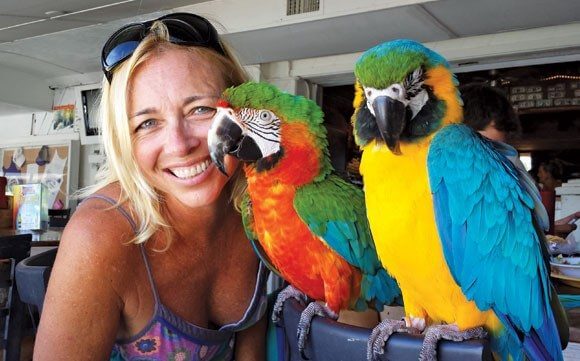 For years, Dockside Lounge on the east side of Boot Key Harbor in Marathon, Fla. was the hidden gem where locals and tourists alike could grab a cold beer and a quick bite while listening to live music. Sadly, however, multiple management changes ultimately shuttered the establishment in December 2012, creating a void felt by locals and the many tourists visiting Marathon for fishing or diving or having a stopover on their way to the Caribbean.

The beer will be flowing and music will soon be playing at Dockside once again, thanks to musician and songwriter Eric Stone and his new bride Kim Hess-Stone. The couple, who purchased the business this spring, have begun renovations to improve and expand the offerings of the previous owners to better serve the diverse mix of people living in and passing through the Middle Keys.

“My vision is for Dockside to be a music venue with great food and drinks,” Eric said.

With a targeted opening in October, Eric is positioning the new Dockside Tropical Cafe as the local music hotspot featuring local, regional, and international singers and songwriters. “The more original the music, the better,” says Eric. The music will range in genre and will include country, rock, blues, and island music. Even when no visiting musicians are in town, patrons will not be disappointed. Eric himself will be performing, playing songs from his 13 CDs that have garnered him fans around the world.

Having performed at a variety of  venues around the world,  Eric has learned what it takes to make a truly great music venue. Using a sound system like no other in the Keys, Dockside patrons will receive a wonderful sound experience while still being able to carry on a conversation.

Taking on such a venture that caters to a complex mix of guests might seem like a big challenge, but Eric and Kim are confident they have what it takes to make their business a part of the Marathon community for years to come.  Each has served as a consultant to restaurants across the country, lending their individual expertise in music and branding. Kim also found success with her yoga teaching and healthy lifestyle columns. Her entrepreneurial spirit helped create Yoga Onboard a guide for cruisers and live-aboards DVD

and the Pirate Yogi line of apparel.

Improving the sound system isn’t the only change coming to Dockside. Renovations will continue throughout the first year to feature a tiki-hut roof, a redesigned dining and bar area, a relocated kitchen, and a gift shop named after the couple’s macaws, Harley and Marley. Music, good food, and friendship will be front and center at the new establishment.

The couple plans to expand the menu using locally-sourced ingredients to better serve the needs of every customer. Traditional pub fare remains, but the menu will also feature island specialties and even healthier, “paleo” diet options.

Locals need not worry that they are losing their spot. “It is important to us to have the locals once again consider Dockside their hangout,” Kim said. To that end, Dockside will be offering special events and discounts exclusively for those who call the area home.

Eric is well-known throughout the islands and is often credited with making Marina Key in the BVI the number one happy hour in the islands. “I’m not going to give away all our secrets, but lets just say if you attended one of my shows at Marina Key you will feel at home at Dockside.”

Local resident and liveaboard Amy Jacobsen is looking forward to the reopening of Dockside. “It is the easiest place to get to by dinghy from anywhere in the mooring field.” Operated by the City of Marathon, the 277-space mooring field in Boot Key Harbor swells from 30-40 boats in the off-season (June – October) to wait-list capacity in the winter. “What was always great about Dockside was you had the guy who only had enough in his pocket for a few beers sitting next to the people stepping off the mega yachts paying for rounds of shooters,” Amy continued. “Eric and Kim’s place will be no exception.”

For all these guests, “Dockside is the only place on the harbor with a full bar and live music,” Kim stated. “We are looking forward to being a part of the Marathon community for many years to come.  Come for the music but stay for the friendships!”