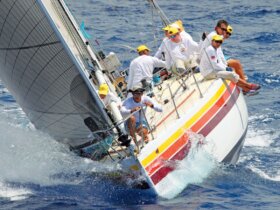 A group of trend-setting Puerto Rican sailors has long kicked around the idea to host an international regatta out of the offshore island of Culebra. The time ripened early this year when the directors of Club Nautico de Puerto Rico announced an affiliation with the Yacht Clubs of South East Florida and switch to the PHRF handicap system over the Caribbean Sailing Association’s CSA handicap.

“The Culebra International Regatta was created to re-insert Puerto Rico into the Caribbean competition in response to requests by both Puerto Rican and Caribbean sailors. We want C.O.R.T. (the Caribbean Ocean Racing Triangle) to happen again, we want Puerto Rico to be part of it and therefore will run this event as CSA,” said regatta director, Angel Ayala.

The new regatta will base out of the 2004-opened Costa Bonita Resort Villa at Bahia Ensenada. The Skipper’s Meeting will be held here at 8 pm on Friday March 18. Two days of racing will follow capped by an Awards Ceremony.

“There will be multiple formats for racers, including windwards-leewards, on Saturday,” Ayala says. “Depending on conditions, we plan to either race in front of Punto Soldado or in the channel between Culebra and Culebrita. On Sunday, we’ll run an around Culebra race so sailors can see the island.”

In addition, Ayala adds, “We have racing for Optimist and Laser dinghies in Ensenada.”

This event will indeed by international with ISAF judge, Michael Thompson of Detroit, Michigan, officiating.

“In the future, we’d like to expand this into a three day event,” Ayala says.