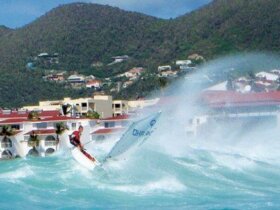 This championship was hosted in Canada by CORK/Sail from June 26 to July 4 at Portsmouth Harbour, venue for the 1976 Summer Olympics. Kingston has a reputation for being one of the world's greatest fresh water sailing venues and the conditions were a considerable challenge for young Optimist sailors, many of whom were attending their first IODA continental championship.

On June 30, after an exciting day of team racing for the Nations cup in gusty conditions, Ecuador proved their superiority in this discipline of racing four boats per team at a time and became the winners of the Nations Cup.

At the end of the 12th and final race, we had a popular champion in Christopher Williford from the USA, who sailed consistently throughout the event, finishing among the top ten sailors in all 12 races (except for an OCS in race 8), the second time he has been awarded the trophy. He won last year's North American Championship held in Republica Dominicana.

Christopher's twin brother Duncan was second overall, and Conner Harding, another USA sailor, was third. Caterina Romero from Peru, the first girl, did remarkably well in all the races and earned a 9th overall.

The Netherlands Antilles were thrilled with the performance of their eight team members who represented the pride of the youth sailing programmes of their respective Islands.

The first AHO team member was Jarrik Bijsterbosch who placed in a very satisfactory position of 59th overall. Jarrik was able to boast three excellent results in the first ten places in individual races of 2nd, 7th and 9th.

Jarrick was closely followed by Louis Hendrikx in 73rd place overall with individual results of an 8th and then five placings between 10th and 20th, which was commendable in his consistency in variable conditions.

Odile van Aanholt, notwithstanding her very young age, put up an excellent showing of tenacity and determination in placing a creditable 97th with a formidable best race securing seven races finishing under 30th. Only one girl also born in 1998 was able to better Odile's performance, namely Alie Toppa of the USA who finished 11th overall.

Jorden Van Rooijen, who placed 100th overall, managed an 11th place and a total of six results in the top 25 places ranging from an 11th to a 25th, an excellent performance for the youngest team member.

Then from St Maarten, RhÃ´ne Findlay, placing 123rd participating in his very first Optinam, was under specific instructions a) to finish every race, b) to be sure to get good starts, and c) to do his best and have fun. Well, he accomplished all three, doing his best and achieving an unbelievable 6th place in his 5th race plus a sprinkling of finishes in the low 20's. Of all 12 starts, RhÃ´ne was 1st to cross the start line twice and 2nd five times. He finished all 12 races with no OCS or DNF … Mission accomplished.

Milou Bijsterbosch, with the result of 147th place, and the brother/sister team Kevin Maas, finishing 160th, and Kyra Maas,183rd, are all to be congratulated for some fine sailing against a very competitive field, and can be proud to have been part of a very difficult competition in very changeable conditions.

With close to 200 participants from 21 countries, our sailors are to be congratulated heartily … you are indeed gifted with the opportunity to share in this very small and elite crowd of children. We as sailors and spectators are proud of you all and believe you set a wonderful example to the many thousands of kids on our beloved islands dotted around the Caribbean and the West Atlantic.

Junior sailors also competed from Barbados, British Virgin Islands, Dominican Republic, Puerto Rico, St. Lucia, Trinidad and Tobago, and the U.S. Virgin Islands with great results. You guys are all unbelievable and we look forward to watch your progress in the future – congratulations and best wishes.