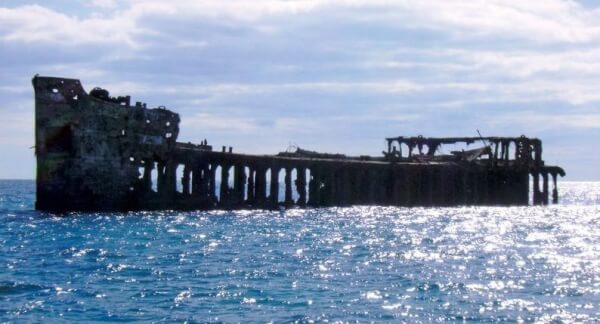 “I recommend leaving from Key Largo… This way you are south of Bimini and you can head almost due east while the Gulf Stream pushes you north at 2-4 knots.”

This issue we are going to focus on the island group of Bimini, which is the closest point to America. If you want to come here by boat you can leave from Miami, but I recommend leaving from Key Largo instead. This way you are south of Bimini and you can head almost due east while the Gulf Stream pushes you north at 2-4 knots.

The main settlement of 1600 is on the seven mile long and 700 foot wide strip of land of North Bimini. Big game fishing is the lifeblood of the island and due to this Ernest Hemingway lived here in the late 30’s while he was writing “To Have and Have Not.” His residence was at the Compleat Angler Hotel, which burned down in 2006.

The busy season for Bimini is opposite the rest of The Bahamas, because guests want calm weather to deep sea fish and snorkel the many wrecks and reefs. During the spring and summer this place can have quite the night life evidenced by the fact there are twice as many bars as restaurants!

When you are here you should make a trip to the local museum, which of course has a whole section on Hemingway’s time on the island. They also have exhibits on pirates, music, the local airline, fishing, and some of the dive sites including the Bimini Road, which is supposed to be a road from the lost city of Atlantis (but is actually just a local rock formation).

A hundred feet or so away is South Bimini which is worth a day visit. The first place I walked to was the fabled Fountain Of Youth. I find it funny that at the American Fountain of Youth there is a whole theme park you have to pay to get in. Here in the Bahamas they just have a sign and a well. If you want some water you have to bring it up quick, because the bucket is full of holes.

The nature trail is a beautiful walk along the scrub, through some gorgeous forest, and along the beach. You can poke around the ruin of Percy Cavill’s house. He was an Olympic gold medalist at the turn of the century and the house shows how conch shells are used as a building material in the Bahamas. Several times along the trail there are displays showing different animals

The final place, which you might enjoy, is the Shark Lab, which is a world famous facility owned and operated by shark biologist Dr. Samuel Gruber. It offers marine biology internships to people interested in shark research and the conservation of the ocean’s ecosystems and tours are given sometimes.

Due to the weather when I was here I did not get to snorkel much, but I did stop at the SS Sapona on my way to the next issue, the Berry Islands.

This WW1 concrete freighter ran aground during a 1926 hurricane. It sits in 10-15 feet of water and you can snorkel inside the expansive cargo hold, the impressive engine room, and other small side rooms.

Over the years this wreck has been stripped down and the wood was used to build the Compleat Angler Hotel. During WW2 it was used as target practice and the famous Flight 19 disappeared while returning on a bombing run. You can even climb up to the deck, walk around, and jump off the side.

Visit www.svGuidingLight.com to read more from Captain Shane about the Bahamas, Caribbean, life aboard, world traveling, and more.