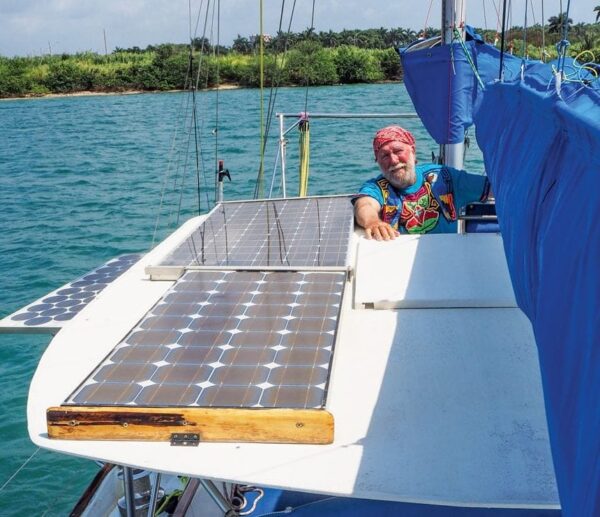 I didn’t have a Bimini on my first two boats. I was too wacked out to realize that orange disk in the sky was the sun. Now that I’m 66 years old and my parchment-like skin is thinner than a Zig Zag, well … what was I saying? Oh, yeah. Biminis—hard versus soft.

By the time I purchased my third boat, I’d discovered that some boats were capable of sailing sort-of into the wind. So, of course, my wife Carolyn made a fabric Bimini out of black (Seamark) Sunbrella. This lasted for 20+ years in the tropics because: 1) Sunbrella is good stuff, and 2) it was dark in color.

My wife Carolyn, who often does canvas work to earn money to buy me presents (lucky me), used to carry an old faded piece of blue and white striped Sunbrella. She’d demonstrate how color affected longevity by handing it to the customer so they could feel the white fabric turning to dust and the relative strength of the identical dark blue.

Eventually, of course, we realized that racing required some degree of intelligence—thus we hastily abandoned the ego-bruising practice. Once we started circumnavigating aboard Wild Card, electrical thingies started to sprout on her loosey-goosey Bimini (GPS antenna, lights, and various sensors). Soon we had so many electrical wires running to the Bimini, it was difficult to fold down. Plus, why bother while in eternal downwind cruising mode? Thus we tossed three additional large solar cells (and their carefully engineered aluminum supports) atop the Bimini and sailed around the world (via the Cape of Storms) without lowering it once.

When I purchased our current Amphitrite 43 ketch, it had a giant hard dodger that I loathed. My initial impulse was to rip it off ASAP. However, I’d promised myself not to initially bite off a more than I could chew major project and thus, the hard Bimini survived my first few random Sawsall Attacks.

I discovered it was both easier and safe to enter and depart the cockpit to go forward because I could hold onto the solid Bimini without worry. In addition, it held our four giant solar panels. Best of all, underneath I had a choice of LED lighting to illuminate our (folding) cockpit dining table, which we use twice daily about 360 days a year.

The hard Bimini even had mood-lighting—all controlled by civilized switches located by the engine instrumentation. How high-class and techno-dudie!

Thus, I considered leaving the hard Bimini despite the fact it wobbled and drooped to loo’ard because it wasn’t supported well.

There are other disadvantages to a hardtop. Visibility is one. It made viewing my mainsail difficult—thus a giant sliding hatch was required. This not only worked well, it allowed me to stand on my helm’s chair and see 360 degrees around with perfect stability and protection from the nipple-high hard top.

But for every yin there was a yang.

The hard dodger greatly complicated my easily-snagged mainsheet and was in imminent danger during a gybe.

On the other hand, the hard Bimini didn’t leak and I could almost stay dry during tropical down pours.

But, of course, it was heavier. And any weight above the deck is bad.

On the plus side, the hard Bimini actually had slightly less windage—an important factor both while sailing upwind and lying to an anchor during storm conditions.

And, of course, it supported the four huge solar cells—enough to generate 30 amps in good conditions.

See how everything is a compromise on a boat?

There was one other factor—our new boat had extreme topsides and much weight up high. This meant it rolled more than the low-freeboard, relatively lightweight Wild Card.

I didn’t like the fact that it always seemed ready to ‘lurch’ me overboard while beam reaching in mature seas.

Here’s what we did: 1) I greatly reduced our hardtop’s area by simply eliminating all overhangs fore, aft, and on the sides, 2) I added six stainless steel braces to make it vastly stronger, and 3) I positioned two of those braces diagonally—crossing the wide ‘toss ‘em in the water’ gap.

These diagonal braces eliminated all fore and aft movement, were easy to slide under or step over, and eliminated any feeling I might be tossed in the sea by a too-playful wave.

This left the mainsheet. My solution was to round all the edges of the solar cells into ‘non-snagging’ corners and allow the sheet to rub on the aft vertical supports (just a tad) while on certain points of sail.

This worked well—except on our first circumnavigation when we realized it was a bitch to furl the mainsail when you can only touch the boom at its fore and aft ends. Drat! More work. I installed lazy jacks while Carolyn sewed up a zippered stack pack.

Suddenly, the mainsail was tamed.

As an added bonus, I discovered the hard Bimini was an excellent place from which to collect clean rainwater—because the mud of the anchor was confined to the deck of my vessel. Yippee!

Now I’ve grown so accustomed to the security of the hard dodger that I’d never consider removing it.

I can easily and safely exist the cockpit with a solid, firm handhold the entire way. This is very comforting while in heavy weather on a dark night.

My massive array of solar cells (total: seven!) are never a problem.

I feel totally safe moving around my cockpit without my safety harness on—after all, I’m in a stainless steel cage of my own design.

And the mood lighting blows away other offshore sailors.

“You mean the lights and switches actually work,” they ask in stunned amazement.

Am I advocating hard dodger over soft?

No, I am not. If you have a light racing boat and value her weatherliness—stick with a soft Bimini.

But our massive Ganesh weighs 36,000 pounds in offshore cruising mode as she toddles off across the Pacific and a tiny bit of additional weight and windage up high is barely noticed.

Anyway, that’s what we decided—though, admittedly, it was a hard choice.

Editor’s note: Carolyn and Fatty Goodlander are currently somewhere sunny in the Pacific—lying naked under their hard dodger while feeding each other peeled grapes.

Cap’n Fatty Goodlander and his wife Carolyn are currently on their fourth circumnavigation. Fatty is the author of numerous marine books. Visit: fattygoodlander.com for details.