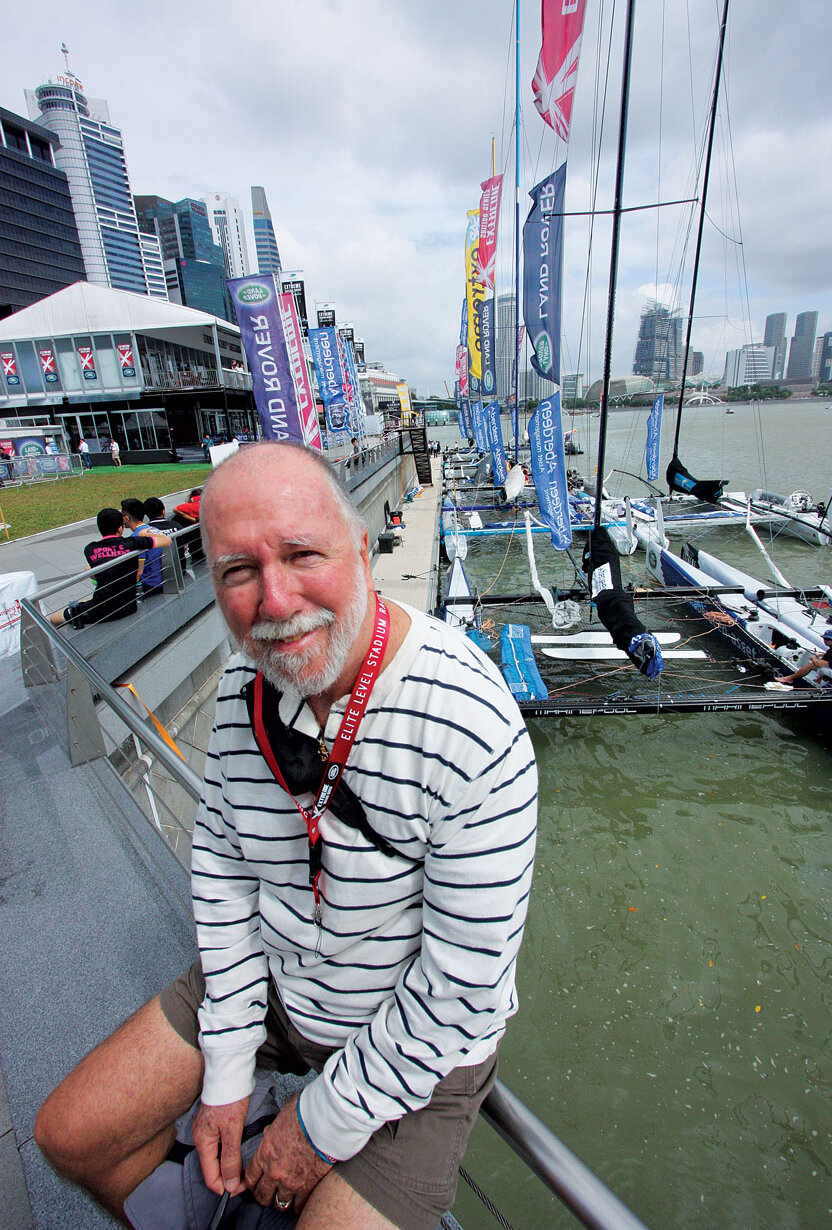 Most of the readers of this publication think of me as a cruising sailor aboard a stodgy monohull—limping around the world at a snail’s pace. And most of the time that’s true. I’ve been passed by jelly fish. Sand bars silt in faster. Offshore, I have to factor in continental drift—that’s how slow I sail.

Nonetheless, my work as a marine journalist has brought me into contact with many famous racing sailors—and not a few ‘hot’ designers as well. In 1988 I covered the OSTAR Transatlantic start for SAIL magazine—and had a hell of a time warming up their credit cards.

The race started in Plymouth, England. If you don’t know much about England, I’ll tell you. It rains, end of story.

Luckily, there was a warm sailor’s café at the marina where the racers gathered. It served a hearty breakfast called the Yachtsman Special—three eggs, ham, baked beans, cooked tomatoes, and lots of other tasty stuff.

St. Johnian Joe Colpitt was traveling with me at the time—that’s right, Caribbean Joe of Virgin Fire, Alien, and Transient fame. He’d once been mentored as a shipwright by famed multihull designer Dick Newick—who he now graciously introduced me to. 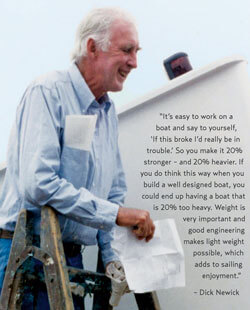 Dick and I hit it off immediately—well, at least for a while.

Dick had two brand new boats in this particular race across the Pond. Ocean Surfer was one. I can’t remember the name of the other. Anyway, Dick was a curmudgeon who was fairly set in his ways—and he didn’t want any extra weight, not even an ounce, added to his creations.

Light’s right. Wood is good. And Dick was here to make sure that both his designs hit the starting line as per his original specs—and not an ounce heavier. He was adamant.

However, this year the organizers required that all the participants carry certain safety gear—including a locating beacon with a heavy battery.

This developed into a major problem. His boats would not be allowed to enter if a solution wasn’t arrived at. And, let’s face it, although the added weight would slow the boat down, ALL the boats had to carry this weight, so it really wasn’t such a big deal.

So the perplexed, creatively-thinking owner of Ocean Surfer came to me with his hat in his hand.

Frankly, I’m not a very nice guy. Sure, I hate to admit it, but that’s how it is. I don’t like to do people favors. Plus, I had nothing but respect for Dick Newick—and I didn’t want to offend him. However, time moves on. Life is weird. And racers want to race—regardless of how their designers felt.

It would take about an hour to install the transponder. The skipper of Ocean Surfer and I agreed on an hour and a half to be on the safe side. Once the deed was done, Ocean Surfer could retire to a mooring and, perhaps, Dick would never be the wiser.

So the following morning, after polishing off my Yachtsman Special, I said to Dick, “I’m going to dash to a hardware store to buy some fastenings—could you come along to advise?”

Flattery is a useful tool—95% of the people won’t realize you’re doing it, the other 5% will appreciate it.

We hopped into my rental car and, indeed, I stopped at the closest hardware but—damn!—they didn’t have what I wanted.

“No problem, Dick,” I said brightly. “They know where I can get silicone bronze carriage head bolts—just outside of town.”

“Actually,” said Dick, looking at his watch, “I should be getting back.”

“Absolutely,” I said. “Not a problem. Ten more minutes, max!”

“Gotta get back,” he said irritably.

I made a U-turn but I made it rather wide—and the rental car rolled off the tarmac into a mud puddle—and sank up to its front right axle.

“Oh, darn,” I said, “Looks like we’re stuck. You wouldn’t happen to have a come-along on your person, would
you Dick?”

Two hours later, we arrived back at the marina—with Dick furious at me. Ocean Surfer was now out on a mooring—only a pile of sawdust to show where she’d once been tied up. 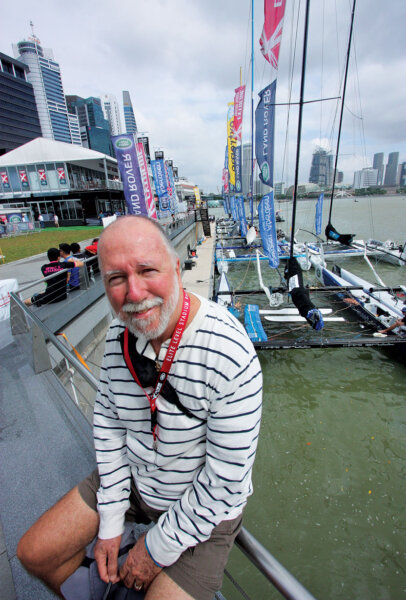 The owner of Ocean Surfer was extremely grateful, true, but I figured it would take a week or two before Dick would forgive me. And that’s how it might have gone down—except the skipper of the OTHER Dick Newick-designed entry had the same problem and wanted the same solution.

“No way!” I said. “I’m not going to spend another two hours with the best known American multihull designer calling me an idiot—no F’n way!”

Luckily, it was raining the following morning—which I attempted to use as an excuse to coax a skittish Dick Newick into my automobile.

“No, thanks, Fatty,” Dick Newick said, while fending off my fender with his palms as we moved simultaneously towards the docks.

“Don’t be silly, Dick,” I said. “You’ll catch your death of cold! Hop in—you don’t even have to close the car door.”

Sadly, poor Dick trusted me once again—and the minute his butt hit the seat, I went careening out of the marina parking lot while screaming over the sound of burning rubber, “Oh, I almost forget—it will only take a sec!” And once over the bridge I skidded into a random parking lot, jumped out, bent over a tire momentarily to shield it from view, and then said, “Oh, shit, Dick—flat tire!”

To this day, when Dick Newick sees me, he stops in his tracks and grabs unto unmovable objects while screaming, “Don’t let that bastard Fatty get his hands on me! That man has the worse transportational luck—he’s a stone-cold navigational idiot!”

No, our friendship never recovered.

It was here at this same OSTAR race where I met Etienne (business name ATN), a once-French, now America marine entrepreneur who perfected (and marketed) the spinnaker sock, among other things. He was a very laidback sailor—who’d decided to join the race at the very last minute. He’d sailed from Newport, R.I. and barely made it to England in time to provision and head back out.

Joe Colpitt and I caught his lines as he arrived in Plymouth—but I was surprised by his first question. “Do you know where I can buy any paperback mysteries?” he asked. “I’m all out.”

I didn’t respond at first—Joe and I were staring at his battered trimaran open-mouthed.

“What happened to your port ama?” asked Joe.

“Don’t you think you’ll, like, need a bow soon?” I inquired.

“Probably,” sighed Etienne. “With boats, it is always something, isn’t it?”

While Etienne loped around town in search of Agatha Christie and P.D. James novels, Joe and I hoisted Etienne’s port ama up onto the dock, mixed up some glue, and stuck some waterproof plywood on the end of his port ama.

It wasn’t perfect—but it was better than nothing, and I understand that Etienne allowed it to stay there for another year or two before replacing it.

A couple of decades later I bumped into Etienne of ATN at a boat show in the States and he said of those days in Plymouth, “Great used book stores!”

Well, he should know.

One evening I was too blasted to go home—and ended up sleeping on a trimaran tied to the quay. (Yes, alcohol was involved.) Why? Because I needed to be in town early to attend a yacht design symposium that famed French singlehander Eric Taberly would be speaking at.

At dawn I heard maniacal laughter—and popped my head up to make sure Adrenalin, a racing boat I was associated with at the time, was okay. It was, but a homeless weirdo was standing beside it, cackling.

His hair looked as if he’d put his toe into an electrical socket—and his jacket was hunched over his thin shoulders. The guy was a mess. I didn’t want to chance that he’d crawl aboard Adrenalin and fiddle with anything—she had to race in a few hours. So I crept onto the dock and approached gingerly. I didn’t want to spook the guy.

“Hey, how you doing,” I said cordially, just to let him know I was watching his every move. “She’s something, isn’t she?”

He grinned and nodded his head—and kind of grunted.

“A trimaran,” I said reassuringly, hoping to move him along. “Three hulls. One, two, three.”

He nodded. Then looked at his hand. He slowly brought up three fingers.

“Quick learner,” I quipped. “Most of these sea-spiders are catamarans. Cats have less wetted surface but tend to pitch more.”

He made a porpoising motion with his hands and stuck out his tongue at me.

Just then Dick Newick and Joe Colpitt came strolling down the dock.

This was before I’d waylaid poor Dick—when he was still speaking to me.

Ah! One of the multihull designers who had traveled down from London with Eric Taberly. Nigel was, at that moment, perhaps the most famous multihull designer in the world—and I’d just explained to him the difference between tris and cats.

“Well,” I said to Dick Newick as I walked away down the dock with a swagger, “we were just comparing notes on his latest designs, that’s all!”