Motion in the Ocean: Swimming Around Key West 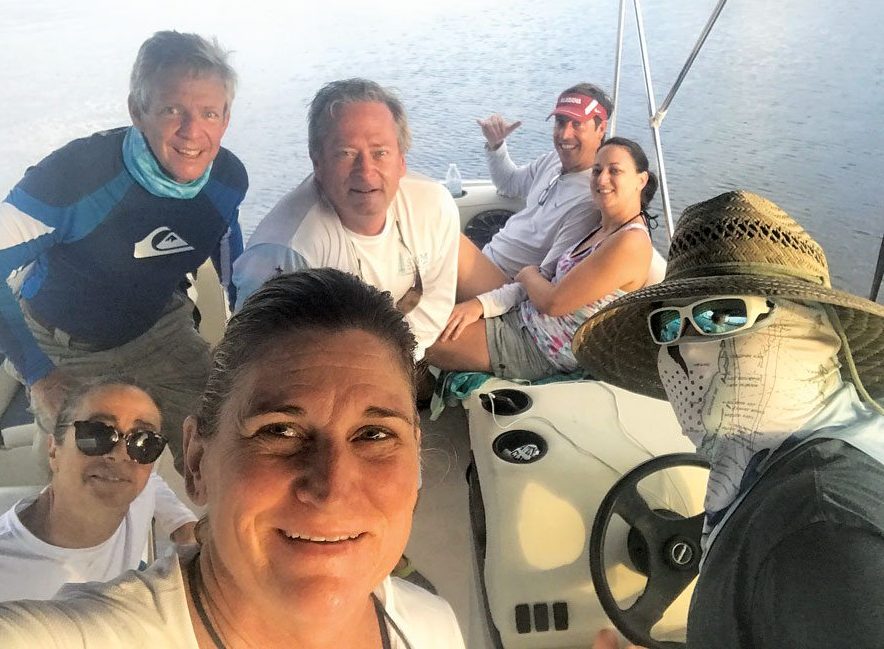 The Swim Around Key West sponsored by Florida Keys Community College is a 12.5-mile journey that attracts solo and team swimmers to repeatedly reach-pull, reach-pull and flutter kick their way around the southernmost island. The FKCC Swim Around Key West celebrated its 22nd year June 10, 2017 with 155 participants starting at 1000 Atlantic Boulevard by White Street Pier. On that particular day, air and water temperature each hovered between 83-85 degrees.

Islamorada’s masters swimmers, who train at the Olympic-sized pool at the Ron Levy Aquatic Center in Founders Park, also known as the Fighting Manatees team, enjoyed success and camaraderie. Sara Kirchner of Islamorada swam solo this year and won her age group, age 35-to-39-year-old women, with a time of 5 hours, 58 minutes Last year, her five-person male-female team placed third in its division with a time of 5 hours, 42 minutes.

Eliza Colmes, Rob Dixon, Larry Herlth, Beth Kaminstein, Olympic gold medalist swimmer Jon Olsen and Tom Strobel made the 90-mile drive from Islamorada to check in for their six-person mixed team relay. In order to maximize speed, each teammate swims 30 minutes of freestyle, and thereafter 10-minute rotations. “If we’re racing to catch another team toward the end, we’ll swim five-minute rotations,” said Strobel. Strobel participated for his third time with this team, and he has kayaked it three times as well to support a solo swimmer.

The teammates enjoy an easy camaraderie. “It’s a fun day out on the water with friends and training partners with enough competition to make it very interesting,” Strobel said. Teammate Dixon concurred. “This swim is more about enjoying a weekend in Key West and promoting our Swim for Alligator Lighthouse. The appeal lies in meeting a great bunch of people while having fun.” They clocked a time of 5 hours, 36 minutes. 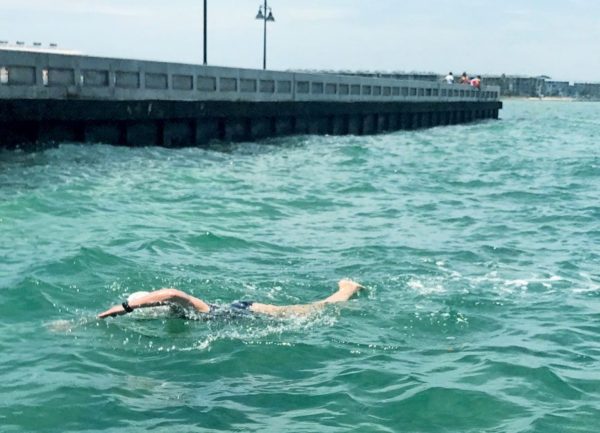 Kirchner swam 30,000 yards per week, with some weeks up to 35,000 yards, and she participates in many swim meets “for pacing.” At least four days a week were 5,000-yard days, she said. She also participated in the 6.2-mile Swim Miami event in May, and said it was a good warm-up.

According to Strobel, he doesn’t train for the Key West swim specifically. “I’m training for the [8.5 mile] Swim for Alligator Lighthouse (SFAL), and the Swim Around Key West happens to occur during that training period. The SFAL training comprises three training sessions at the pool a week, with each swim from 3,000-5,000 yards, and a long open-water swim on the weekend or during the week. I’ll gradually increase the mileage of the open water swims to six miles by the SFAL in September. That’s the plan, anyway!”

Kirchner said seeing Key West from the “outside looking in” was a highlight. Swimming just 16 minutes longer than her relay team a year ago, Kirchner observed that the solo swimmer must eat and drink water while treading water. “I stopped about every 30 minutes for water. It’s important not to dehydrate.” She also said distance swimmers can experience a numb tongue afterward from tasting so much saltwater.

Lifeguards are stationed throughout the course as well as boats every mile to ensure swimmer safety. The event is sanctioned by the U.S. Coast Guard. Every swimmer must have his own support craft in the form of a kayak or small boat. Most relay teams use a boat and the solo swimmers usually use a kayak escort.

The FKCC Swim Around Key West benefits the FKCC pool by providing scholarships for swimming and water safety instruction and aids in purchasing equipment for the swim clubs that train at the college pool.