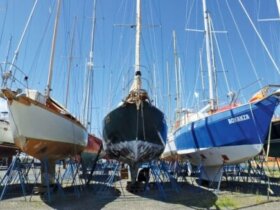 Bequia boasts a rich maritime heritage founded on boat-building. Construction of seafaring craft as an industry here dates to the 1800s. This second largest of the Grenadine islands soon earned a reputation as the ‘Boat Building Captial of the West Indies’ for its finely-fashioned double-ender fishing boats, whale boats and inter-island trading schooners. In fact, the island holds the record for building the largest wooden vessel in the region, the 165-foot three-masted Gloria Colita. Today, Bequia’s renowned for its shipwrights continues, albeit it on a smaller scale. That is, it’s intricately hand-crafted replica model boats are what attracts visitors from around the globe.

From Coconuts to the Britannia
“I started making boats out of coconut shells when I was about six or eight years old,” says Timothy Sargeant, whose family owns Sargeant’s Model Boat Shop and whose brothers, Lawson and Winston, started this art and founded the shop in 1966. “When my friends and I got to be teenagers, we’d put a stick in the coconuts for a mast, attach a sail and race them. They still race coconut boats each year at the Bequia Easter Regatta.”

Mauvin Hutchins, owner of Mauvin Model Boat Shop, began crafting model boats because of his love of the water.

“I noticed people liked the coconut boats, so I decided to make them and take them down to the tourist center to sell as a business. From there, I started making gumboats. These have a long keel and are made out of wood from the gum tree. All the kids like to take them out, sail them and swim after them. I started selling these at the tourist center too,” says Hutchins.

Everything from traditional whaling boats and classic sailing schooners such as the 100ft Bequia-built Friendship Rose to modern-day cruisers with brands like Oyster and Hallberg Rassy, Windjammers, J-Class America’s Cup yachts and even power yachts are all within the repertoire of these talented men.

One of the most impressive builds ever made on Bequia was a model of the HMY Britannia, the three-masted 412ft royal motor yacht of Queen Elizabeth II.

“The Queen visited St. Vincent in 1985 and then Prime Minister James Mitchell wanted a gift to present her when she arrived. He asked my brother Lawson to make a model of the Britannia. He did, and Mitchell presented it to the Queen on October 27, 1985. He said she was amazed at such skill and detail. In fact, she said it was so realistic that the only difference from the real Britannia was its size,” tells Sargeant.

100% Hand-Craftsmanship
“It was a long process when we first started making the gumboats. That was because it took six to eight weeks for the wood to dry properly after cutting it green. Now, we mainly use white pine. The advantage is we can start right away. I go to the hardware store in St. Vincent to buy the white pine. The problem is that it’s getting hard to find. I’m trying to find someone in Canada I can get it from. I also use mahogany,” says Hutchins.

Hutchins and Sargent use no power implements to make model boats. The tools of their trade include hand planes, chisels, machetes and carving knives. As such, it takes on average of about one month to craft a whale boat, four months for a sailboat, seven months for a powerboat and eight months or more for a wooden schooner. Models can sell for anywhere from $250 up to $7000.

Sargeant, who has crafted models for over 27 years and has over 400 boats to his credit, is teaching his ten-year-old son, Gabriel, model boat-making.

“I’ve started him on cleaning the wood with a plane to make the masts for the sailing yachts,” he says. “Lots of the other kids come in here to get wood to build their boats for the Easter Regatta. But they don’t stick around to learn. This is something that takes patience. Young people today want quick money.”

Own One of Your Own
Sargeant’s (Tel: 758-458-3344) and Mauvin’s (Tel: 758-458-3669) model boat shops are located near the vegetable market in Port Elizabeth, and are open Mondays through Saturdays. Both men have several types and sizes of boats on display and for sale. True to their roots, coconut boats are available and a big hit with children. Bequia’s model boats have been sold all over the world, to people in the U.S., Australia, New Zealand, France and Belgium, to name a few places.

“If someone wants a specific type of boat, they can commission me to make it for them. Making models for people is what I like best. They come in, see it, and are amazed and start crying. It’s a lot of work, but they don’t expect it to look so close to the original,” says Sargeant.