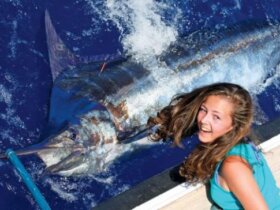 Down-to-the-wire excitement characterized the close competition at the 44th Antigua and Barbuda Sport Fishing Tournament fished out of Nelson’s Dockyard May 21 to 23. It wasn’t until lines out on the final day of fishing that the Antigua-based team aboard Miss Ashley, Phillip Shoul’s 32-foot Outrage Boston Whaler captained by Brian Nunes, learned they had won the Marlin Division with the release of two blue and one white marlin.

Miss Ashley was among 43 boats hailing from Antigua, St. Lucia, St. Thomas, St. Barth and Guadeloupe that were lured to enter by over $20,000 in cash prizes. The fleet, off for a sunrise Bimini start on the first day of fishing, spread out as far south as Guadeloupe and north between Antigua and Barbuda. However the bulk of the boats, Miss Ashley included, throttled straight for the South Bank, a fertile fishing ground some 13 miles south of Antigua.

“We fished the bank for about two hours with no luck, so we changed course and ran for an hour about 10 miles east of the bank,” said Capt. Nunes, relating Miss Ashley’s winning fish tale. “Our only luck out there was a proper wetting from heavy rain showers which lasted about an hour.”

Nunes monitored the VHF all morning, hearing that a few boats had hooked up blue marlin and a few had released their fish. It wasn’t until the afternoon that the Miss Ashley team released its first blue marlin, about a 260-pounder, after finding it under some birds. The team fished the rest of the day along the southeast corner of Antigua where there were lots of birds, but they didn’t catch another fish. By day’s end, only five boats had released one blue marlin apiece, so the tournament was still anyone’s to win.

The next morning, Nunes headed out at 5:30 to the southeast drop off to try for some early fish where he had seen birds the day before. “On our arrival we noticed that there were no birds, so we left to try a spot where the boat Overdraft had raised at least six marlin the day before,” he said.

The change in location was fateful, as the Miss Ashley team released its second blue marlin, about a 160-pounder, en route. They didn’t have any more luck for several hours, although they still hoped to get at least one more release to widen the gap – and their lead – on points.

Then, in the afternoon, said Nunes, “We heard that Eli Fuller had boarded a blue marlin, but we had no idea of the size, so it was nail-biting time.” Fuller’s fish later turned out to be 18 pounds under the 300 pound minimum release weight so it didn’t count.

Mid-afternoon, Nunes received a fateful call on the radio from Capt. Frank Hart on Overdraft. After Hart told Nunes that the current had changed from the day before, Nunes decided to try fishing between the South Bank and Antigua.

“It paid off,” Nunes said. “We picked up our third fish, a white marlin of approximately 40 pounds, which gave us a total of 700 points with the three fish.”

The day wasn’t over and there were a couple of boats fighting fish right up to the 4 p.m. lines out. The Miss Ashley team had to wait till all boats had returned to port before they could celebrate.

“I think we all had a good tournament, says Nunes, “with lots of rum and fun.”

For full results of both the Marlin and Sport Fish divisions: www.antiguabarbudasportfishing.com