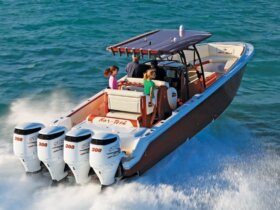 A visit to any major boat show will reveal that center consoles are growing in size and as a result so are the number and size of outboards on the transom. A fast growing category, manufacturers are not blind to this trend and have brought some innovative new motors to the market that complement these larger boats perfectly. Motors such as those offered by Seven Marine have opened up a market for center consoles that would have required more outboards than transom space allowed. Other manufacturers are beginning to follow suit, showing off their new offerings. I was recently asked to be on a panel of innovation award judges at IBEX, the International BoatBuilders’ Exhibition and Conference, in Tampa, Florida, and got to experience some of these engines first hand. At that show Yamaha Marine was showing its all-new 5.6L V8 XTO offshore 425HP outboard and Mercury Marine had its new line of 4.6L V8 outboards, including the 300HP Verado. Both these outboards are chock full of innovations and represent the future of high horsepower outboards needed to propel ever larger center consoles.

Extreme Yamaha Built from the Ground Up

The all new Yamaha 5.6L V8 XTO is an outboard that Yamaha specifically built from the ground up to meet the needs of the growing number of 50-foot-plus center consoles entering the market. Designed to perform on this size of boat and chock full of innovations that resolve issues these larger craft can impose, it won the IBEX Award For Innovation in its category.

Standing next to one it is clear that this is a huge motor that would look right at home on the transom of a massive center console. Outputting 425Hp from its 5.6L V8 power plant, it is clear just from looking at this motor that it can produce the impressive power and thrust that boats in its category require.

Weighing in just shy of 1000 lbs these motors are not light but neither are the boats they are designed to propel. Yamaha points out that the power to weight ratio of these new motors is actually less than its lighter 350HP V8. Another thing to consider if taken aback by the weight is that these are designed to push boats of a size and weight that were once propelled by large outdrives or inboards weighing the same or more.

At the base of these huge outboards resides an equally large and impressive propeller. This 17 1/8 inch prop is capable of the high trust required of larger and heavier boats and helps eliminate the lack of power felt with smaller motor and propeller combinations throughout the power band. No matter what the RPM any change can be felt as these props push with authority.

Another common issue sometimes found on larger center consoles is the poor thrust experiences while in reverse. Yamaha has resolved these thrust issues with the engines’ exhaust exiting above the cavitation plate at low RPMs rather than the more traditional exit through the propeller hub. The result according to Yamaha is over 300% more critical thrust in reverse than its 350Hp model. Anyone backing down on a fish or docking/maneuvering in challenging conditions will surely appreciate this feature.

Chock full of innovations this powerful outboard answers all kinds of other issues found with smaller outboards on large center consoles. Efficient for its large size and horsepower this outboard gets its power through direct injection. The first of its kind in a four-stroke outboard, atomized fuel is injected directly onto the piston at a very high 2900PSI. The result is an efficient, cool fuel injection that prevents detonation while increasing throttle response and producing more power. Because of this type of injection greater fuel efficiency is accomplished, all while using just 89-octane fuel.

The lower unit is also built for power and efficiency with larger gears to drive the hefty propellers and four intakes to keep water flowing well, no matter what position the trim is set to.

Other innovations include the completely electric steering system. With no hydraulics present the space taken up by lines and pumps is free and clear, giving more room in the bilge and transom area. All rigging is plug and play, as is joystick steering. Even the tilt angle of 70 degrees is designed for these engines being mounted on larger center consoles.

The engines can be tilted up, bringing the whole motor and propeller out of the water, when not in use or at dock. Yamaha engineers also had the forethought to design the engines so that they can be regularly serviced with lower unit and oil changes performed without having to haul out. The high output alternator is capable of outputting 72 amps at 1500 RPM — plenty of output at slower speeds ensuring power hungry systems are charged, even at low speed.

Mercury Marine also had its innovative new V8 outboard line on display at IBEX. Launched in May of 2018 these outboards add to Mercury’s line with a 250Hp and 300HP Verado, a 250HP and 300HP FourStroke, as well as a 200, 225 and 300HP Pro XS outboard. These sleek looking completely reconfigured motors not only look fast, but are also fast and powerful with many new features, all based on Mercury’s 4.6L V8 configuration, there are many configurations available.

Sea trials aboard a SeaVee rigged with triple 300HP Verados showed the judges just how powerful, quiet and efficient these new motors are. Rigged with these top-of-the-line Verados, idling was surprisingly quiet and smooth. Power and thrust was consistent throughout the power band and even at high RPMS we could have conversations at normal voice levels while still hearing enough of a satisfying sound, reminding us we had some major horsepower propelling us.

The mid-range torque is also impressive and we felt no hesitation when accelerating mid RPM. Lighter than the motor this outboard replaces (with claims of being the lightest 300HP in its class by over 10 lbs) and with all its improvements, repowering is easily justifiable. It will even use a lot of the same rigging from its predecessor and the electro hydraulic steering can even be retrofitted if desired with the new outboard. The all-new cowling is even designed to aid in servicing while at the dock, eliminating having to remove the cowling, an awkward activity at best.

The 32 valve quad cam 300HP Verado engines have what Mercury calls an Advanced Mid-Section (AMS). Its job is to cradle the motor, reducing vibrations and dampening shock as well as to house all of the power steering in one unit. The motors themselves are slim, with the idea that they can be mounted closer together, giving more power options to certain modern center consoles. With the built-in electro hydraulic steering units installations are clean and the transom and bilge is clear of unnecessary clutter.

Similar to another large V8 on the market these new Verados are available with accent panels that can either be factory painted in select accent colors or “paint ready” panels that can be custom painted. The cowlings themselves can be purchased in Mercury’s Phantom Black, or Warm, Cold and Pearl Fusion White. The AMS mid-section comes in a silver color and the combination makes for a sleek and futuristic looking outboard.

Looking at boats in marinas, at shows and out on the water, it is clear to see that mid- to large-center consoles are growing in numbers, and Mercury and Yamaha are meeting the demand for ever more feature rich and powerful outboards to power these impressive vessels. These V8 outboards set the standard for anyone looking for innovation and performance in a new set of outboards.