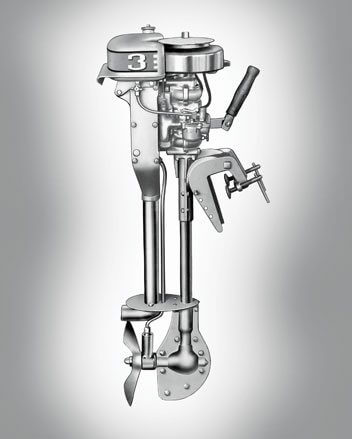 Mercury was founded by E. Carl Kiekhaefer in 1939 when he purchased a bankrupt engine manufacturing plant in Cedarburg, Wisconsin, not far from the Kiekhaefer family farm. The plant assets included 300 outboard engines that had been rejected by a large mail-order retailer due to defects and operating problems. Hoping to transform the engines into working capital to fund the future business he envisioned – magnetic separators for the dairy farm industry – Mr. Kiekhaefer redesigned, rebuilt and sold the engines to the retailer that had initially rejected them. The engines sold immediately and Kiekhaefer suddenly found himself in the marine engine business.

“Mercury will celebrate its 75th anniversary throughout 2014 in ways that will reflect our strong heritage of innovation and leadership in the marine industry,” said Mark Schwabero, president of Mercury Marine. “We will conduct events in locations around the world that will engage our customers, suppliers, employees and communities and will recognize the roles those people and entities have played in establishing the foundation of our business and our future.”

Mercury directs the activities of more than 5,400 employees in dozens of countries from its global headquarters in Fond du Lac, Wis., and works hand in hand with more than 4,200 dealers and distributors around the world.

“We’re excited about sharing this celebration with those who have helped us grow and succeed,” Mr. Schwabero said.

Mercury’s year-long 2014 celebration plans include events in various locations throughout the world.