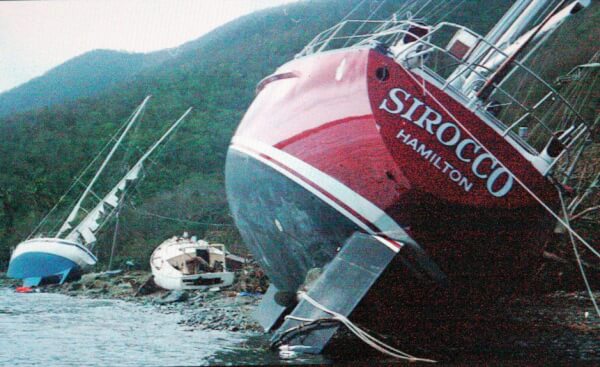 As a yachtsman there are some things you never forget: The day you buy your boat; the day you sell your boat; the most idyllic landfall; the quickest passage and the most terrifying experience. For many Caribbean sailors the latter would be living through Hurricane Hugo.

On September 17th 1989 one of the most intense hurricanes for decades was building in the Atlantic Ocean and heading towards the Virgin Islands. I was in the last stages of installing a new exhaust system on my boat Starry Night, a Tayana 37, tied up at Village Cay Marina in Road Town, Tortola. My girlfriend Monique kept reminding me it was time to leave and find a safe anchorage. Because of the lateness of our departure, we surmised that possible anchorages on Peter Island and Norman Island would be crowded but that Francis Bay on St John would be a good choice. By late afternoon we were passing Leinster Bay; the squalls from the outer bands were already coming at decreasing intervals. I nosed into the bay to have a look; there was a good spot in the southeast corner in about 10ft. We decided to grab it. We got four anchors down; two on each of two rodes in the shape of a Y. The rodes were well protected with rubber hoses at chafing points and were bitter ended at the mast. All sails were stowed below; the hank-on jib and staysail were easy. The dinghy with outboard I tied fore and aft along the port quarter in case we had to abandon the boat. Night was falling, the squalls and wind were increasing and we looked forward to a miserable night

The local radio station in Tortola was audible; however, protected by high hills on three sides, we could receive nothing on the VHF. The wind and driving rain increased and around midnight the boat was getting slammed badly. It would slew to one side with gunwales in the water, take up and then slew to the other side. When the boat was knocked down on her starboard beam ends the dinghy was blown upside down into the cockpit and gas started leaking out. The first time it happened I came up from below and threw it back in the water. The second time, I decided to tie it off the stern but after only minutes the painter was torn from the bow and it disappeared, cart-wheeling into the spume. During the early hours of the morning the shrieking wind was terrifying. Monique sat on the loo praying. (In a perceived evil in her life she prayed that if she was allowed to survive she would quit smoking – we survived, of course, and she hasn’t smoked since). At one stage I heard an ominous clunk from the bow and crawled up there to take a look. A stainless steel cleat that held one of the anchor rodes had snapped off but luckily it jammed inside the bulwark.  This slightly lengthened the rode, which fortunately altered a chafing point on the bobstay. I lengthened the rode on the other side too and crawled back to the cockpit and below. Monique had managed to make some hot tea. By this time the wind appeared to be shifting more southerly and we were well protected from this quarter – but still the shrieking winds continued.  By about 6am dawn began to brighten the sky and we were able to see some of the damage. Several boats had parted from their ground tackle and fetched up on the southern shore – they all appeared to be abandoned. By mid morning we heard on the radio that the storm was off the eastern end of Puerto Rico and this was confirmed by the wind direction, which was now tending south-southwest.

At some stage during the night I had managed to get a piece of rigging wire jammed into my finger and it was becoming swollen and infected. We found our dinghy up in the bushes; it was torn to shreds, the outboard ruined. We managed to get it floating and, with a salvaged paddle, brought it back to the boat. By afternoon the wind had subsided sufficiently to get underway; I needed some antibiotics for my hand so we decided to make for Cruz Bay, St John where there was a clinic. It was closed so we tried Red Hook on St Thomas and there we saw the terrible destruction and devastation. Yachts were piled on top of each other on the beach at Muller Bay, many were sunk; one 40-footer had been flung onto the patio of a restaurant above the ferry dock. Hugo was a wake-up call. So many had underestimated the storm, made bad decisions on where to anchor and were unprepared. For our part we thanked our lucky stars because it was largely luck that had steered us to a safe anchorage.

The name Hugo will never be given to a hurricane again.

Hurricane Hugo’s sustained winds of 160mph made it briefly a category 5 hurricane on the Saffir Simpson scale, a catastrophic storm, as it approached the Lesser Antilles. It then maintained a category 4 status as it traversed south of the BVI. It made landfall on St Croix and Vieques, and the eye wall came close to Culebra causing devastation and the wrecking or sinking of over a hundred yachts in the anchorage of Ensenada Honda. Yachts that remained in Red Hook, St Thomas also suffered similarly. Both anchorages are exposed to the southeast with a long fetch.